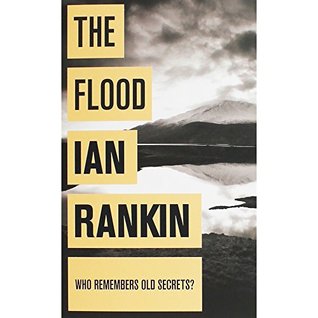 This was Rankin’s first novel written in the 1980s while he was a graduate student at the University of Edinburgh and published in 1986. It is a very different book than his well-known Rebus novels, written in a different style but contains some of the familiar underlying themes he included in his later work. This is not a thriller or a crime story although it includes a mystery, secrets and revelations as it tells the story of a young boy growing up in a small rural village in Scotland.

The story is set in Carsden, a small fictional coal mining village in Fife. It begins as ten year old Mary Miller watches her brother play when suddenly some older boys grab her beloved doll Missie Lizzie and run off with it. Mary runs after them trying to retrieve her precious treasure when Matty Duncan one of the boys, pushes her into “the hot burn”, the chemical laden waste water that drains the area’s coal mines. Mary almost drowns but surfaces from the ugly sludge and returns home where she is comforted by her parents. Her Dad tells her Matty Duncan is to start work at the coal mine and he will be sure to give him a “good thumping” to teach him a lesson for what he has done. Mary wakes from sleep the next morning devastated to see her hair has turned silver. Her mother takes her to the doctor who says it is not unusual for something like this to happen after a bad shock and her hair’s normal color may or may not return. It never does.

On Matty’s first day at the coal mine, Hugh Miller carries out the promise he made to his daughter and beats Matty Duncan unconscious. Matty expected it, thinking that would be the end of it. But the next day as he descends the mine’s tunnels, an accident occurs and he is killed in a fiery explosion. After Matty’s death, the townspeople begin to gossip about Mary and start connecting her with witchcraft.

The town of Carsden began to change when the coal pits became less productive. What was left after years of mining were fragmented seams, too difficult and expensive to extract so the mines closed and life changed irrevocably for the men and their families. The mining of coal had always been the main source of employment for the villagers but suddenly the miners lost their jobs and the young coming out of school did not have the ready employment that had always been available. Many left Carsden for nearby towns in search of work, but found them lonely places without the community and friends they had been surrounded by most of their lives. Others chose to stay at home knowing they lacked the education or skills for any new emerging jobs. They applied for the dole, bitter about the way life has treated them. Mary’s brother Tom decides to immigrate to Canada to try to make a life for himself. Two months later Mary tells her mother she is pregnant.

When Mary is fifteen she has a baby boy she calls Sandy but never reveals the identity of the father even to her parents. Her father, without work since the mine closed, sits in his chair most of the day and begins drinking heavily. He is often seen out at night drinking and wandering the streets with his friend George Patterson who owns the sweets store, shouting and hurling invectives at the treachery of the National Coal Board. On one of those nights, he is hit by a car and killed. The rumour among the villagers is that he was so ashamed by his daughter's illegitimate pregnancy he committed suicide by jumping in front of a car.

Once more the townspeople begin connecting Mary with bad luck and the belief she may be a witch. Matty’s father believes the events have nothing to do with bad luck and fuels rumours that Mary holds some mysterious power over people. Sandy grows up among those allegations, becomes known as the son of a witch and is taunted and bullied at school where he has few friends. But as time passes, the boys gradually let him become one of them and he develops some friendships. He takes school seriously, likes English and writing stories for which he gets good marks, studies and tries hard at his exams. The villagers often ask him about the identity of his father. Sandy knows all the rumours , but feels it is a personal and unnecessary question. He doesn’t know, has never asked his mother and never intends to.

After the death of her mother, Marry raises her son on her own. She had always resented being shunned by her neighbours, but the whispers, snide remarks and jokes gradually die down over time.

When Sandy is fifteen he meets a gypsy named Robbie and his sister Rian who have set themselves up in a huge, run down, deserted mansion on the edge of town. At different times it had been a TB hospital, a home for shell shocked veterans and eventually the home of the local pit managers. Its windows are now boarded up and it is in a bad state of repair, but Robbie and Rian have made it their home. Robbie is five years older than Sandy and says he has been looking after his sister since he was six years old and sees himself as her protector. Sandy finds Rian intriguing and falls in love with her, seeing her as an outsider much like himself. She tells him not to trust her brother who harbours a deep simmering anger over having to watch out for her all these years. Sandy doesn’t trust Robbie, feels sorry for Rian and wants to protect her from what he believes is her brother’s predatory behavior. He visits the mansion on a regular basis, always trying to see Rian without Robbie present. They have a strange queasy relationship and Sandy dreams of running off with this strange unusual young girl.

The story is well written, the characters vividly portrayed and sympathetic. Rankin describes the universal torment of adolescence as Sandy grows up with the emotional trauma of being gossiped about and marginalized in a small, religious tight-knit community. He also excels in his description of the decline of the small, one-company towns that flourished and provided a good living for its residents until the time when the resource dried up, the company shut down and there was nothing to replace it.

Those who are familiar with Rankin’s career and his writing may be interested in this novel. Although set in a small rural area rather than the busy urban streets of Edinburgh, the setting of the John Rebus novels, readers may already recognize the themes that continue in Rankin's present work. He has long been interested in folklore and often brings old Scottish tales and myths into his novels. The downtrodden classes of long ago often used witches as convenient scapegoats for bad fortune. They provided a ready excuse to avoid looking at their own failings and an easy target for their anger and bitterness. Rankin also explores the pernicious power of the church in small religious communities as well as important social and political issues, themes he continues to include in his Rebus novels, although he does so in a much more subtle way through his characters.

The novel serves as an example of his early work and while those who have immersed themselves in his later work may not find it anything more than a simple story, what is special is the quality of his writing and his ability to draw believable and sympathetic characters so early in his career while still a graduate student. It is also interesting to note that by the time this book was published, Rankin already had the idea for his next novel, Knots and Crosses, the first in the John Rebus series, the one that was to propel his writing on to the bestselling lists.

fascinating novel that offers many different topics: superstition and suspicion, Scottish small town, Scottish mining history and the impact of the closure of the mines on the former miners, adolescent trying to come to terms with his unclear descent, love of different shades. It's somehow a dark novel, yet with some fascinating descriptive parts. I was intrigued.

Is Rankin a little short on cash? This is the second reissue of a very old book (his first apparently) I have read in the last couple of months. Please write something new.Not recommending this. You just keep waiting for something, anything, to happen. Nope, life in a small Scott village.