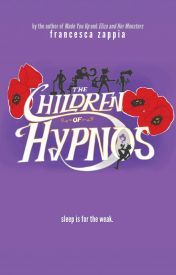 The Children of Hypnos

I AM SO EXCITED FOR THIS!
I can't wait to see what broke Eliza and Wallace.
But...
DON'T WRITE FOUR BOOKS AND THEN GO INTO HERMIT MODE.

New cover, new content, new chapter header art. (Btw, if any Goodreads librarians can change the cover on here, I would greatly appreciate it.)

Thank you everyone for reading. I hope you enjoy the continuing story!

Amazingg!! All I want in life now is for this book to be published so I can have my own hard copy to love and cherish forever! And for the rest of the series to be written and published as well!

Wattpad will be the end of me, I swear.

I honestly can say, this was enjoyable. The greatest? As in, I cannot live without knowing what happens next--help, my heart is lost, and I cannot find it--my tears have not stopped yet flowing and my sense of life is rapidly decreasing? Nope. It has not, in fact, done all that. But come on, seldom books do, to be honest. I just wish my life would've been blessed more with swoony moments, just because the main character has had a boyfriend. Um...which boyfriend again? I am being legit truthful with y'all. You know in those books where the concentration is so much in the action (which is not bad, at ALL. However, the 'boyfriend' is still active in this story so yeah, I expected a bit more) that the 'promised' romance, kind of took a back seat and went...non-existent? I was surprised when he was mentioned as a love interest. Like, this guy? I have more chemistry with a toilet paper than the main girl does with him. And yes, I did indeed say toilet paper. We have an ongoing relationship. Sue me.

In the OTHER hand (the thing that saved this whole book, to be honest) the idea? Dreamhunters, Dreamseekers, *ahem* DREMKILLERS (y'all know who you are, you should be ASHAMED, I wanted an extra donut with the box, not an extra KIDNEY.) all of THAT, is such an amazing premise for the whole book. I would like to see it upped to ? in the following book. Because, guess what? I did not KNOW there was in fact, a second one. Pardon my genius, if you will.

Another thing that I would've liked better...more dead people. Seriously, nightmares kill. So then, let some people die. Perish. Leave the world. Fall asleep for eternity. Be exiled from existence-I'll stop. It would've added, I don't know, something MORE to the book. Am I evil to be asking for that? Hmmm, well, if a certain BEING doesn't gift me an extra donut, I'll be completely fine cutting off heads and poisoni- moving on...

The last point I'll touch on, because I need to harass (gently and with decorum, obviously) some authors into writing books faster and not making me wait two years for a gosh darned sequel. The characters in their entirety. They were good. Great? Remains to be seen. Did I love them? Eh. Depends on the day. And the plot twists. Also, the death I WAS gifted, was painful. For about 3 minutes. After that, well, things moved on.

So yes, I'll probably (not) find the brain cells which have escaped the jail inside my head to write a full length, fully fangirly (AGAIN, I fangirled, but not as much as I WANTED to. A squeal here and there. You know, I have to keep up the reputation of screeching like a banshee every 15 seconds. My neighbors will think aliens have abducted me or something. Or goodness forbid, I've become *shudder* normal) completely sarcastic review, therefore, I'll leave y'all with this little note of mine.

IF I DO NOT GET MY EXTRA DONUT, I WILL EITHER GO ON STRIKE OR HAVE A MINOR BRAIN *waving hands wildly* THAT. THOSE ARE MY TWO OPTIONS. DEAR CASHIER, LEAVE THE DONUTS WITH ME. OTHER PEOPLE DON'T NEED THEM.

P.S: Excuse me while I go watch a movie to somehow TRY to superimpose my magnificence over more innocent (?) beings and convert them into fellow followers of the Mighty Sarcasm. Adios!

P.S.S: And yes, I barely understood everything up there. It's who I am. Confusion incarnate. Now, I only need to find Hotness incarnate. Where's he at?

P.S.S.S: Also, just count the amount of times I say the word 'donut'. The bridge to Terabithia will be revealed to you. *snort*

"Sleep is for the weak."
Holy Zeus, this was splendid!! I love the idea of fighting monsters and doppelgangers in dreams! So surreal.
I used to think there wasn't a lot of good stuff on Wattpad...this has proved me utterly wrong. And all the art Francesca has made for this is so aesthetic!
Really looking forward to reading more by Frances Zappia.

A little unedited and info-dump-y, but still a fun read! Excited to see how Francesca Zappia chooses to continue the series.I am especially curious to see whether she chooses to write a fifth book or go into hermit mode.

If this is anything close to as good as the characters in Eliza and Her Monsters think it is, it will be amazing.

All my admiration goes to the writer, I'm stunned!! (unable to breathe, live for a while, etc). I thought it'd be great, but not THIS GREAT!! I'm still shaking inside of all that happened from the beginning till the end and I need more!