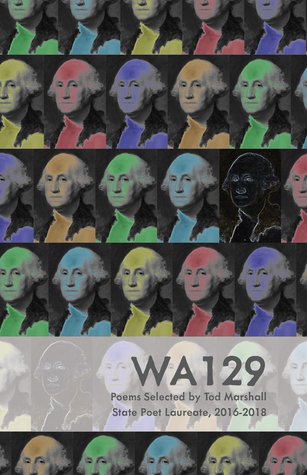 Honoring Washington State’s 129 years of statehood, this anthology -- edited by state poet laureate Tod Marshall -- features 129 Washington poets. Each poem describes a deeply felt connection to Washington through poems of cherished hometowns, wondrous landscapes, racial divisions and cultures, and a variety of other topics. This is an expansive and memorable collection of voices.

Honoring Washington State’s 129 years of statehood, this anthology -- edited by state poet laureate Tod Marshall -- features 129 Washington poets. Each poem describes a deeply felt connection to Washington through poems of cherished hometowns, wondrous landscapes, racial divisions and cultures, and a variety of other topics. This is an expansive and memorable collection of voices.

As is the case with most poetry anthologies, this one has its highs and lows depending on your expectations. For me, the heights weren't necessarily the poems that showcased showoffy pyrotechnics but rather the poems which gave me a taste, a scratch or sniff sense memory, of Washington state, even if the language was plain, even if the poem wasn't a technical marvel, a marvel of technique and virtuosity and energy and accents and syllables.

So, the anthology succeeded in the moments when I recognized a landmark, whether it be a drive-in theater or a mountain range. It failed when the language got too froo-froo, fruity, the imagery too abstract. You can do a lot of things with water, whether it's swim or drink or gaze, but over thousands of years, water (from the sky or through the woods) has really been wrung dry as far as, y'know, making a person feel anything whilst they're reading unless, like, they're real super-thirsty or something or other.

The collection seems to be tilted more towards the west side (Seattle), which is unfortunate, because the eastern side has its vibrant scene of, like, diverse voices, too, man. The stars of the anthology are immediately recognizable names: Sherman Alexie, Tess Gallagher, Tom Robbins - but I wish each poet was given at least a thumbnail biography, as their bonafides are boiled down to the city and/or region in which they're presently scribbling their little hearts out.

As a snapshot of where poetry as an art is now, this collection is pretty terrific. As a document of where Washington state has been and where it sees itself going, it seems to struggle.

"it was difficult to image a day in December, reaching in the freezer to taste July... I'd tried to convince her the best fruit's where you're standing, not at the end of the row." - At the Bybee Farms U-Pick, North Bend, Washington, by Martha Silano.

This anthology represents the place I live in and who I am as a person. A chronicle of Washington through beautiful imagery, sensory details, and clear memories. I've enjoyed reading almost every single poem in this, and might check out some of the poets' other works, since some of the poems I loved and touched me in a deep and profound way. I found myself having a nostalgic feeling of home, like all of the poems made me feel and think of the place that I lived in all my life. Tod Marshall did a fantastic job at choosing poems that go together, this book seemed cohesive and connected, even the order of some of the poems seemed related or similar in theme. Some of the poems I had a hard time with and some I didn't think were good, others I just didn't like at all, but overall this anthology was very beautiful and I enjoyed it a ton! Even if you don't live in Washington State, these poems can move you and make you feel, make you see! I appreciated the diversity of topics, most of them had similar imagery, but at least they were not about all the same thing. Hopefully, there will be another Washington poetry anthology like this one, I will be looking forward to it!

Favorites:
-At the Bybee Farm U-Pick, North Bend, Washington by Martha Silano
-Another Angle by Kristen Orlando
-In Every Ripe, Ready Thing by Terry Martin
-Via Negativa by Irene Hayes