Home › Authors › Cynthia Shattuck › So You Think You're Not Religi... 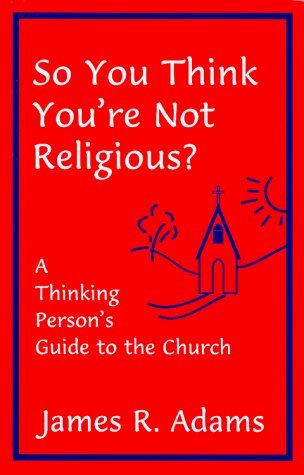 So You Think You're Not Religious?: A Thinking Person's Guide to the Church

A powerful and practical introduction to the church for newcomers and old-timers alike. Topics include belief, the creed, sacraments, prayer, and belonging.

A powerful and practical introduction to the church for newcomers and old-timers alike. Topics include belief, the creed, sacraments, prayer, and belonging.

This is a very interesting book that is at points stunningly insightful, at others just plain out there and at times surprisingly petty and narrow-minded. I suspect that some of this variability has to do with the challenge of its ostensible mission - to allow skeptics to be drawn to and join the Episcopal Church while maintaining their intellectual integrity. As a book targeted at acknowledged skeptics, it sometimes seems to try too hard to make spirituality and belonging to the (faith) community more accessible, yet it also offers such an original take on the meaning of scripture and ritual that you may be moved to say "wow!" as I did several times (and this is actually the third time that I've read this book).

For example, Rev. Adams's take on eternal life, resurrection and the interpretation of miracles will make you think, as will his espousal of the necessary synthesis of intentional and contemplative prayer. I won't divulge more here, but, suffice it to say, these perspectives could really blow you away.

By contrast, his suggestion that "Churches with a racial and cultural mix exist, but by examining them closely the visitor will likely find them to be congregations in transition from one kind of people to another" can be interpreted as close-minded at best and borderline racist at worst. (Perhaps this is a reflection of its having been written almost two decades ago when our appreciation for diversity and inclusion was not nearly as significant as it is today, but, still, this from a priest?!?)

So, too, with his sharing of his typical reaction at church services that he attends while on vacation - despite repeated admonitions to skeptics to reserve judgment and be patient with new religious and church experiences, he reveals that he is often bored to the point of anger. What?!? It's hard to imagine that he would want to be on the receiving end of this seemingly consistent lack of empathy and/or tolerance. It's also surprisingly out of alignment with his oft-reinforced reflection on Jesus's commandment to love others as ourselves, and yet he seems to have no sense of this or concern about it at times. This strangely verges on a "do as I say" approach against which he generally inveighs in the rest of the book.

This being said, despite the uneveness, because of the piercingly profound insights that it divulges, I recommend it. It's worth looking beyond the unfortunately misaligned idiosyncracies to get to the unique perspectives on some of the most "unanswerable questions" of faith. These revelations are potentially life-altering in the sense that your spirituality could be permanently changed (or, certainly, enhanced) in an affirming and inspiring way.

Okay. Can't help but feel he doesn't, in the end, make a really compelling case for why non-religious people would go to church. It isn't that there are no people like he describes--just that there are very few of them!