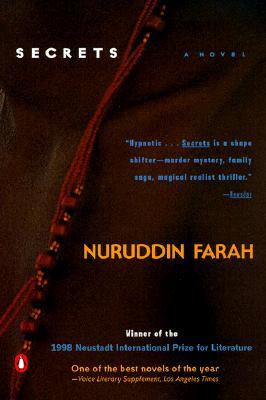 I wanted to like this book very much. But the story ran on too long, and by the end I no longer cared what happened with Kalaman and Sholoongo.

The members of Kalaman's family were all well-drawn, but I found the attempt at interweaving large-scale Somali political history a bit uneven. The roadblocks as he drives in/out of Mogadishu seemed placed in an effort to build tension. The opposite happened because the impending conception didn't seem such a big deal.

The part about "the horror" of eating menstrual blood was retold unnecessarily. It wasn't such a shocker to begin with, and then became more and more tedious the more it was noted.

Did enjoy the journey into another culture, and the descriptions of village life, religion, customs, etc.

Think a good editor could have made this book dynamite.

This book had a great potential of being a best seller. It had a good story line and gave a glimpse of Somalia and
life in that country. Nonno was introduced as a great man, almost self made; and a family man. His son' s relationship with his wife was very strange , and he was a good character in his own right. The wife was quite something though; I struggled to figure out her bold and cold nature. The beloved grandson was to me very weak and it was hard to accept that Nonno's other genes didn't rub on him, besides the obvious lack of endowment in certain physical attributes. Shongolongo's abilities were overrated and unfounded. The author took a bit long to expose the secret, and dwelled too much on the sexual indiscretions of the characters. There was enough sex for the world no matter a person's sexual orientation or preferences. The story about the menstrual blood could have been a great punch line had it only been mentioned once, and maybe recalled again at the end. However, its repetition spoiled everything.

The secret was worth keeping by the boy's parents, and it explained a lot about his mother's behavior. It also gained both his grand dad and father a great deal of respect. It is really sad what people subject each other to, and the dehumanizing ways we use to meet our selfish goals are shocking.

I couldn't nonetheless feel the built-up to the crisis Somalia is in currently, apart from the few road blocks and the increasing number of dead bodies lying on the side of the roads which the author quickly mentioned in the short spaces he refrained from explaining sexual acts.
I must say the author has a very rich English vocabulary; I stopped bothering checking the meaning of words out of fear of not finishing the book.

The most complex and well conceived book in the trilogy, one that I may wish to re-read, perhaps in ten years. The tone is different and so is the style, akin to the magical realism of García Marques, the only way of making sense out of the tragedy of the Somalians. Then again, I wish I could dwell more into the concepts of "nuuru" and "nabsi".


I struggled to reach two thirds of the way and then abandoned this novel by the highly acclaimed Somali writer. Sorry – I just couldn’t soldier on any longer. The book came from my TBR pile. I bought it, as one of my attempts to read world literature novels.
Amazon.com informs us : It is the week before the outbreak of the civil war in Somalia. Kalaman, a successful young businessman in Mogadiscio receives an unexpected house guest—the wild and sexually adventurous Sholoongo, his childhood crush returned from America. She announces that she intends to have his baby. Confronted by this dangerous interruption from his past, Kalaman starts to investigate his family's history, and uncovers the startling key to his own conception. Hailed by Salman Rushdie as "one of the finest contemporary African novelists," Farah writes in a rhythmical, sensual prose reminiscent of García Márquez's best fiction. Evoking the beauty and tragedy of Africa, Secrets is a remarkable portrait of a family disintegrating like its country, its ties dissolved by exposed lies and secrets
Reading amazon.com’s précis of the novel it all sounds so straightforward, but as a reading experience, it is not. The narrative constantly wanders off into Somali folktales, which I couldn’t connect with the story. Also, the characters relate their bizarre, disturbing dreams throughout the story, but perhaps I should rather describe them as nightmares. Again, these were difficult to connect with the narrative.
Another ingredient which I disliked, was the constant graphic reference to each character’s sexual history, their sexuality, including that of a very young boy. I found the childhood sexual activity shocking. And no, I haven’t been living under a rock for the past decades. I’m sure cultural conditioning both on my side as reader, and on Farah’s side as author, is responsible for my uneasiness.
Despite my reservations, I enjoyed the writing; it’s terrific, rich in colourful phrases and descriptions. I can see why Farah has been described as one of the foremost African writers. Despite this, I was dis-enjoying the book so much, I decided to abandon it.

This book is a difficult read. Not necessarily in how it is written, but because of what the book is about. Just like the other two books in this trilogy this one is not for everyone. I very nearly put this book down to read something else. I'm glad I got myself through it, but I think if some one can't finish it that's perfectly okay.

The biggest hurdle to get past is just how truly gross this book is. I don't remember a book ever making me dry heave before, but this one did it. There's many kinds of rape in this book, assault, disease, murder, pedophilia, and one character drinks another characters mensuration. The last part is the thing that made me dry heave. I think the book has enough to say that if you were engaged with the previous books this one is worth it, but I don't think I'll ever get the gross images out of my freaking head. Those scenes nearly got me to give up on the book. I'm not going to try and convince some one to force themselves through this book.

So why did I give this book five stars if I honestly dislike much of what is in it? Well that's the thing. This book isn't meant to be beautiful. It is about the Somali civil war. Ugly times call for an ugly story. That makes the book really good at expressing the time period it is set in. The theme of secrets plays into that really well too. This book is rather sex obsessed, and that sex plays into the secrets. Many of the secrets are the sex. The narration plays into that as well. Most of the chapters are told through first person perspective and that perspective jumps between different characters. The characters are all unreliable narrators. Some more than others. The reader is a character in the book as well and the narrators are actively hiding parts of the narrative from us. They say they forget parts of the story, or that something is not important, or that they'll tell us later. One narrator even swears they are telling the truth like they are in a court of law. Due to that it takes a bit of digging to see what story is being told. The theme really saved the book for me. If this was just a tale about awful people doing awful things I don't think I would have gotten through it.

Of the trilogy this seems to be the book with the most Somali culture baked into it. There are a lot of clan customs and taboos discussed. I don't really know very much about those aspects, so I kept getting a little bit lost in them. I don't think that's a bad thing though. It gave the book more flavor and since I don't know much about that aspect it just further amplified the theme of secrets. Mileage may vary on that point.

I don't know if I would really recommend this book. I'm glad I read it, but I don't know if some of the stuff I read in here was really worth it. If you found the first two books captivating sure give this a go. If you're looking for a good book to start the trilogy with may start with Gifts.

It's Somalia---Mogadishu and environs---back when the country was about to descend into clan warfare and central government would disappear. The country's premier author has written this novel about a time of troubles. But you, the reader, are making your way through a thick jungle with heavily-scented flowers, buzzing insects, and the cries of hidden creatures that you hear but never see. It's all exotic and fascinating in a sweaty way, but why are you cutting such a path ? Where are you heading ? Personally, this reviewer lost his ambition to reach the end and despaired of even finding an open space where he could catch his breath and take stock of some direction. Those who love pure, lush verbiage, stacks of proverbs and unusual images will disagree with my take on SECRETS, but in my view, you must be a very determined reader to reach the end. I admired his "Sardines", written over thirty years ago and so was most willing to try this one, but I was disappointed. The writing is skillful; shifting voices, building up some tension (extremely slowly), extensive use of magical realism. 'Nuoro'--a quality which enables plants, animals and humans to divine who wishes them harm and who is benign. 'Nuoro' enables you to know when to stay and when to run. I think 'nuoro' helped me to stop reading, though the book did not harm me of course. 'Nabsi' is a quality that leads to human stability, an equilibrium of sorts. I moved in that direction by reading something else. Nuruddin Farah has talent, but I think it went overboard in this novel. That's it.