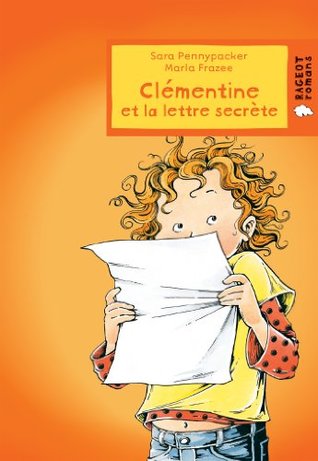 You just cannot go wrong with Clementine. She is sweet, thoughtful, smart, funny (mostly without meaning to be), and thoroughly entertaining in every way.

Go right now and either buy the three titles in this series or check them out from your local library. Your kids will love them. Just trust me. (Hey--I'm a librarian. If you can't trust me, who can you trust?)

Clementine's back and better than ever. Just as soon as Clementine was getting the hang of third grade (she hadn't been sent to the principal's office in a week!), she learns that Mr. D'Matz is a finalist in a contest for a trip to Egypt. He'll be gone all week at the judging and if he wins, he could be going to Egypt for the rest of the year! There's no way Clementine's going to let that happen, especially after she meets her new substitute teacher. Mrs. Nagel has changed all the rules and Clementine keeps getting into trouble. When the principal asks the kids in Clementine's class to write letters to the judges telling them why Mr. D'Matz should win the contest, Clementine gets a brilliant idea. But will her idea work? Can she survive the third grade without Mr. D'Matz? And what other trouble will Clementine get into?

Another hit in the Clementine series. I'm not normally a big fan of series, but these are excellent. I loved how the bond between teacher and student is portrayed and how the conflict is eventually resolved. Clementine's got real spirit and creativity and, although her ideas sometimes result in disasters, her heart's always in the right place.

Every time a new Clementine book comes out, my toes wiggle with glee. I know that between those pages, I will find moments to laugh aloud, discover myself as a small child again, recognize my children, and simply sink into a wonderful book. They never disappoint.

This third Clementine book has her bonding with her third grade teacher until he is nominated to go on a trip to Egypt. Now Clementine has to cope with a new teacher who doesn't seem to have the same rules while desperately trying to keep her old teacher from winning the award and leaving. Clementine also has to try to do something extra nice for her mother because she is writing a story with her father. It's only fair to do things equally according to her friend Margaret.

Once again I was charmed not only by the effervescent Clementine who walks her own walk and sees the world through her own special lens, but by her parents who love her simply for being herself. Other adults are equally well drawn and complete as are the children around Clementine. Add to that Frazee's line art which constantly shows the field of chaos around Clementine as she moves through life, and you have such a believable and vibrant book that it is hard to put down. In fact, I recommend having all three at hand, because you are going to want to start the entire series once again just to spend some more time with them.

Highly recommended as a readaloud, or for parents of children who don't conform to what the world seems to expect, or for children themselves who have a good sense of humor and love to laugh. Hey, it's great for everyone. Enjoy!

Clementine dearly loves her third grade teacher, Mr. D'Matz, and is deeply disappointed to find out that he will potentially be leaving for the rest of the school year to go on an archeological dig, all expenses paid by the Adventures for Teachers Program. In order to go, though, he has to compete with other teachers who have also been nominated for this honor. He needs the children in his class to write letters of recommendation for him. Clementine doesn't want him to leave so she writes a letter that will hopefully have the opposite effect of winning. Will Clementine have to learn to love the substitute teacher she doesn't get along with or will she get her dear Mr. D'Matz back?

Personal Thoughts:
Clementine is a character who struggles a lot with paying attention, impulse control, and an inability to think about future consequences of her actions. I think that she is a very realistic character (probably struggles with ADHD), but I feel like all of the extremely creative ways that she misbehaves would not be good for the targeted audience. Copycats, I fear, would discover many new behaviors that their parents would not approve of. If she was a character in an older kids' book, teen book, or adult book, I wouldn't have a problem with it, but don't think it's a great idea for a young children's book.

Language - Stupid; Clementine calls her younger brother various vegetable names (we never learn his real name); the teacher's last name is D'Matz and it is pointed out in detail how his name sounds like two swear words combined

Disrespect of authorities - Clementine has many disrespectful thoughts about her substitute teacher; she stomps down the hall in anger in one scene

Violence - Clementine coerces other children to lend her money with glares; a graphic and gross description of mummification in one scene

Other - Clementine writes on arm repeatedly and this is portrayed in a positive light and compared to a tattoo; an adult writes on her arm; Clementine sells items that were not hers to sell (portrayed in semi-negative light and restitution is made); a child has a broken family (mother and father are divorced and mother has a boyfriend)

My 7 year old niece comes into my room one day and gives me this book. At her school, a teacher gave it to her and told her to give it to someone you think will enjoy it. She knows I enjoy reading so she decides it will be me. I had put off reading it for nearly a year and now I promised I would read it this week. It's the third book in a series about a dastardly, yet well meaning third grader named Clementine. Her teacher is about to leave the school for an archaeological project if he wins a competition against other teachers. She doesn't get along with her new teacher. It's a simple story, I'm far above the age group this book is for. But I found myself chuckling at the humor, intrigued by the plot, and choked up by the ending. That's good children's literature. When adults can appreciate it and see the moral value of it for kids. Thanks Olivia.

style="display:none" This book gets 5 stars! This funny story has a good lesson, too. It tells about third grader who loves her teacher. But when her teacher gets a special opportunity, she might have to put up with a teacher who seems mean for the rest of the year. Can she figure out the new teacher and support her old one, too? This book is a definite home run!

This series is great for young readers in grades 2-4. They are very interesting with lots of humor and Clementine is such a great relatable character.

I fell in love this week. The object of my affection is an irrepressible young redhead called Clementine. My own little redhead has been acquainted with Clementine for some time, but I have only just the pleasure of meeting her. Clementine reminds me so much of my own children. She is clever, funny, thoughtful, caring, sensitive and like most children, much smarter than we adults think! I smiled from ear to ear throughout this book and even found myself growing a wee bit misty at the close with the very apt mother bird analogy. Thank you, thank you Ms. Pennypacker for a treasure of a read!

Another great story! The plots are fun, the main character is adorable, and the illustrations are delightful. This is my 3rd Clementine book, and I REALLLY want to find out the real of name of her little brother!

While I'm sure children woud enjoy this book, I also think this book would benefit teachers, reminding them that sometimes an off-beat or unusual child might be a treasure not just a trial. It can inspire you as a teacher to reach out to all those in your classroom and be understanding of their viewpoints. (P.S. There's a brief discussion of how her teacher's name sounds similiar to a couple curse words.)