Home › Authors › Eric Bentley › Jungle of Cities and Other Pla... 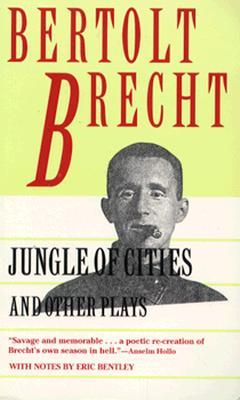 Jungle of Cities and Other Plays: Includes: Drums in the Night; Roundheads and Peakheads

"In the Jungle of Cities" is a revelatory experience. A true undiscovered gem of the theatre.

brutally honest. a pretty, eye-opening, examination of the society we live(ed) in.

These didn't do a whole lot for me - they weren't realistic enough to be called dramas, and weren't crazy enough to fit into "absurd theater" (which I usually enjoy for some reason).
The title play, "Jungle of Cities", had a decent premise - a stranger enters a man's life, gets him fired for an unknown reason, and proceeds to mess up his life for kicks. However, it quickly bogs down, and never lives up to Brecht's description, "an inexplicable wrestling match, and the destruction of a family that has come from the prairie lands to the great city jungle."
"Drums in the Night" is a little better, but not by much. About a veteran coming home from a P.O.W. camp to find his woman engaged to another man, the plot gets more and more confusing, until, in my favorite part, a bystander asks a waiter what is going on, and the waiter proceeds to sum up the plot to that point. I could have used this waiter a few times myself.
My favorite was "Roundheads and Peakheads". A parable about Hitler, Nazis, and Jews, it's set in the mythical land of Yahoo, where citizens either have round or pointed heads. When things start going bad, an ambitious new leader, Iberin, comes on the scene and blames all the land's problems on the pointed-heads. (Shades of Dr. Seuss's "The Sneetches?") Again, a great premise goes off the rails again in what seemed to me to be a weak ending.
I didn't hate this collection, but I didn't really like it either. I enjoyed "Mother Courage" a little more, so I'll probably give Brecht another chance. One side-note : I'm amazed that plays as strange as his actually got on stage, and were supposedly fairly popular. The dialogue is purposefully unnatural, the premises are strange, and the sheer number of characters must have made it tough to follow the already strange plots. More power to early 20th century theatergoers for going to these - I can't imagine how poorly the reaction would be if they were written and performed today. And it's not just the Germans - a lot of Harold Pinter, Samuel Beckett, and Eugene Ionesco seems just as strange to me. Even though I didn't like this collection, my hat's off to Brecht and the audiences who enjoyed it.

I have to admit, I never really liked Brechtian plays. The main problem is that, more so than most plays, it has to be performed, not read. I didn't fall in love with it until I had the good forutune act in it. Brecht creates a marathon of a story, full of unique characters and outlandish scenes. There are some classic one liners, and again, the play is a decent read and a much better performance to watch.

It's hard to give this work a rating, as the plays weren't gripping so much for their plots as how it is possible to see Brecht honing his skills as a playwright and exploring his views on state-sanctioned violence.

These are some weird plays you guys