Home › Authors › Thomas Pynchon › The Teachings of Don B.... 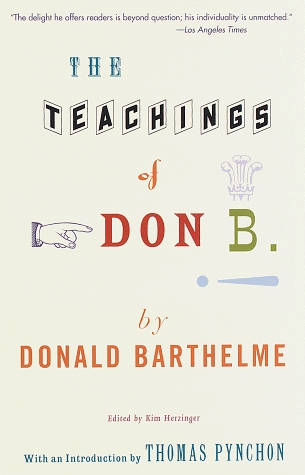 The Teachings of Don B.

A hypothetical episode of Batman hilariously slowed down to soap-opera speed. A game of baseball as played by T.S. Eliot and Wilem "Big Ball" de Kooning.  A recipe suitable for feeding sixty park-enamored celebrants at one's daughter's wedding. An outlandishly illustrated account of a scientific quest for God. These astonishing tropes of the imagination could only have been generated by Donald Barthelme, who, until his death in 1989, more or less goosed American letters into taking a quantum

A hypothetical episode of Batman hilariously slowed down to soap-opera speed. A game of baseball as played by T.S. Eliot and Wilem "Big Ball" de Kooning.  A recipe suitable for feeding sixty park-enamored celebrants at one's daughter's wedding. An outlandishly illustrated account of a scientific quest for God. These astonishing tropes of the imagination could only have been generated by Donald Barthelme, who, until his death in 1989, more or less goosed American letters into taking a quantum leap. Now sixty-three of Barthelme's rare or previously uncollected shorter works--including satires and fables, plays for stage and radio, and collages--have been assembled in a single volume. Gleeful, melancholy, erudite, and wonderfully subversive, The Teachings of Don B. is a literary testament cum time bomb, with the power to blast any reader into an altered state of consciousness.

"Barthelme happens to be one of a handful of American authors, there to make the rest of us look bad, who know instinctively how to stash the merchandise, bamboozle the inspectors, and smuggle their nocturnal contraband right on past the checkpoints of daylight 'reality.'"--Thomas Pynchon, from the Introduction

Barthelme as an author of the past

The consensus on Barthelme is that he launched the postmodern short-story form in the US. A thoughtful review by James Wolcott ("Bookforum," February / March 2008, pp. 9-10), sums it up:

"Today, I would hazard... the track marks of Barthelme's suave, subversive cunning are to be found less in postmodern fiction -- although David Foster Wallace's dense foliage of footnotes suggests a Barthelmean undergrowth and George Saunders's arcade surrealism has a runaway-nephew quality -- than in the conscientiously oddball, studiedly offhand, hiply recherché, mock-anachronistic formalism of 'McSweeney's,' 'The Believer,' 'The Crier,' and related organs of articulate mumblecore."

The current generation of young MFA writing program candidates still see the "McSweeney's" option as one of their main goals. So in that sense, Barthelme remains a ubiquitous influence. (George Saunders's essay on Barthelme, in "The Brain-Dead Megaphone," is the best thing written on Barthelme, if you're looking for a guide.)

Barthelme is part of the history of postwar American writing. But is he someone to read now? Here I was struck by just how much of it has lost its shine. There are hilarious pieces, and at times the wit is as sharp as it seemed in the 1970s. But Barthelme's liberal politics are as predictable as his quips are surprising. His absurdism has always been a safe version of real absurdism. If you're interested in surrealist or absurdist shock, read Raymond Roussel, or Daniil Kharms (who has also been praised by Saunders, in the "New York Times Book Review.") As Wolcott points out, the entire New Fiction movement was subjected to a typically devastating critique by Gore Vidal ("American Plastic: The Matter of Fiction") back in 1976; Vidal thought the movement, including Pynchon, was contrived and derivative of French experimental fiction. I'd rather trace it to Russian and central European absurdist literature and surrealism, but the significance is the same: Barthelme is watered-down, domesticated, playful, harmless absurdism. Never too angry, seldom directly polemic, never despairing. (That would be gauche, and it would dispense with the multiple layers of irony that are necessary to project authenticity while studiously avoiding it.)

After a few days reading Barthelme, the happiness of seeing plodding seriousness exploded continuously and brilliantly in my face when I least expect it (but really not-so-secretly expecting it all along) pales into a memory of that happiness, which I now mistrust and even regret, and I find I want some real pain or a laugh that doesn't come with a small grimace acknowledging the writer's artifice and the reader's complicity.

This is a curious, uneven, posthumous collection that includes Barthelme's signed and unsigned letters to The New Yorker, recipes, short-short stories, photo/illustration collage stories, variations of stories that appeared in Guilty Pleasures and Overnight to Many Distant Cities, and plays that were never produced. Barthelme newcomers ought to begin with either aforementioned book, because the works here run the gamut from treasures to dreck. What's worthy is wonderful, though, and this book was a true refuge during my last few weeks of graduate school. Below are a list of the pieces I loved (including "L'Lapse", a scathing, spot-on rip on Antonioni's film "L'Eclisse", which is one of my favorite films) and the usual glut of excerpts.

Languishing, half-deep in summer . . .
The Palace
The Joker's Greatest Triumph
At last, it is time . . .
Games Are the Enemies of Beauty, Truth, and Sleep, Amanda Said
The Angry Young Man
Speaking of the human body . . .
L'Lapse
Bunny Image, Loss of: The Case of Bitsy S.
The Photographs
Monumental Folly

The bits that clicked:

Languishing, half-deep in summer, soul-sick and under-friended, I decided to find love.

But I put my melancholy aside and went vigorously about the business of getting connected. I got myself connected to Southwestern Bell, and Entex, and the Light Company, and cable TV, long lines binding me once again into the community.

I set out to sail Buffalo Bayou on a four-by-eight sheet of three-quarter-inch plywood powered by eight mighty Weed Eaters and I saw many strange and wonderful things. I saw an egret and then another egret and a turtle and a refrigerator without a door on it and a heron and a possum and an upside-down '52 Pontiac.

These fine homemade recipes work! Use them with furious enthusiasm.

I am, at the moment, feeling very jolly. Hey hey, I say. It is remarkable how well human affairs can be managed, with care.

The moon rocks were as good as a meaningful and emotionally rewarding seduction that you had not expected.

In Bicentennial America yesterday is terrific. Instead of yearning forwardly, which makes more sense in terms of the possible, we yearn backwardly, and who cares for "sense" anyhow?

BLOOMSBURY: A girl I knew once. Slightly. For a space. (Pause) A short space.

WHITTLE: Did you get on well together?

SNOW WHITE: You've exhausted me . . . as a possibility?

A little uneven but there are several uproarious peaks.

Plays
-The Friends of the Family

Collage Pieces
-there are about six of them and really I liked every one, The Nation of Wheels is about exactly that and is the zaniest of them all.

There were a number of shorts I couldn't make heads or tails of, and the other two plays left me bemused. Still a lot of good variety in this volume and some of the head-scratchers will probably warrant a revisit down the road.

This is an audacious agglomeration of steampunk, doodles, in-jokes, New-Yorker-speak and pretentious new-age twaddle. And I don’t buy it. It seems to me that if Barthelme was half as clever as he liked to pretend, he could just as easily have written something inspiring. Or insightful. Or at least, God help us, amusing. I suppose Don B was having fun. I wasn’t.
After plodding my way through the first half dozen entries, I began to perceive a pattern: Each article started off with a kind of set-up, reminiscent of the intro you get at the opening act of a play — along the lines of “A deserted street, somewhere in the lower East side, enter a barber and his landlord, carrying a monkey”. This is mildly intriguing. Dialogue ensues. It all fades away. I shake my head and try the next entry. Repeat process. Having thereby been enlightened regarding how this works, I understood that by reading only the first dozen lines of each article, I would be almost certain to learn everything of interest that the entire piece had to say and would be free to move right along to the next entry. I would like to thank Mr. B for imparting to me a valuable technique for saving time, should I have occasion to read any more of his stuff at some future date. Regrettably, Mr. B is no longer with us, so I’m unable to thank him in person; perhaps I ought to send a letter of thanks to his publisher. But on second thought, that would be pointless, since I will make sure never to read any more of Barthelme’s musings.

Despite what the wonderful introduction by Thomas Pynchon claims, this is not 'vintage Barthelismo.' There are some choice odds and sods - including dynamite recipes - for the delectation of fans, but the curious should start with '60 Stories.'

Absurd and surreal free-associative stories, playful, odd, and totally uninterested in comprehensibility, full of references to literature and philosophy, art and music, but also to pop culture and ephemera, comprised of found texts, collages of words, lists, theatrical declamations, bizarre dislocations and nonsequitors. He used the methods invented by Gertrude Stein, James Joyce, and others to unfold language as a tool for the unfettering of human consciousness and our liberation from social and historical norms and conventions.
Donald Barthelme wears the hat of a jester, but enacts the performances of a revolutionary. He descibes his early influence in a Paris Review interview, recounting that his father "gave me, when I was fourteen or fifteen, a copy of Marcel Raymond’s From Baudelaire to Surrealism". I'd say he has spent his life continuing in that path, from where others left off.
Master of the short story, he explores new modes of fiction in collections like Come Back, Dr. Caligari, Guily Pleasures, Sadness, City Life, Guilty Pleasures, and more. One might begin with the two posthumus collections of essays & stories, The Teachings of Don B. and Not Knowing. Of his novels, Snow White is a stellar debut, and The Dead Father is a masterpiece which everyone should read.
Snow White is a farce of broken dreams, its impact reliant on tone, of which he is a master, borne on a wave of experimentalism of every kind, an astonishing performance which defies interpretation.
The Dead Father is an outrageous, hilarious, glorious satire grown in the soil of Nietzsche's Thus Spake Zarathustra and Freud's Totem and Taboo, a trip on Ken Kesey's Magic Bus with William S. Burroughs as the tour guide. Ride along a while, and see where the road takes you.

Putting this away for now, after 114 pages. Loved the style and voice, but you lose something reading such quick-hits straight through in book form. One after another, they start to lose their fizz, and you're left craving something more substantial. It'd be perfect to stumble upon one on its own in a magazine.