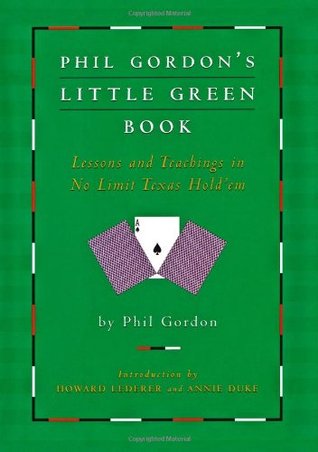 This should probably be the second poker book any serious player reads, or the first book if you've already got a good handle on the rudiments of solid play. Gordon does an excellent job of walking the fine line between math, instinct, and aggression.

Pretty good. Broken up into bite size chunks, it is easy to jump around to whatever section you want. Lots of good information and examples.

Sometimes I get days where I have nothing to do but read, and I get to sit around and devour and entire 500+-page book in a matter of hours, make myself a cup of tea to clear my book hangover, and pick up the next one.

I hope I get another one of those days at some point this summer because my last one was in January.

Sometimes I get entire weeks and months of running around with ten million things to do, working my way through whatever poor book I've been lugging around in fits and starts, stealing a page here and a chapter there, ten minutes of reading in the car before going into work, five minutes before bed because it's actually past when I'm supposed to go to bed and I'm exhausted. The biggest chunks of time come when showing up to dinners 45 minutes early because I don't really have enough time to go anywhere or do anything else between where I was before and when I'm meeting people, so I get a drink alone at the bar to try and make a dent in my reading.

May has been like that, which is how it took me more than two weeks to finish reading Phil Gordon's Little Green Book, a volume considered a classic of poker strategy books precisely because it is short and easy to read.

In retrospect, I think it's a pretty good book to have been forced to read in fits and starts, since by design it is broken down into lots of little short sections, and it's nice to be able to read a handful and let 'em sit in the back of your brain digesting for a bit before biting off the next few.

The Little Green Book is not a "What even is poker" book, of which I have already read two this year, both by guys named Phil. The better one was Phil Gordon's Poker: The Real Deal, which is part of why I bought the Little Green Book when I decided it was time to learn more. The Little Green Book is a proper strategy book, complete with charts and math and things. There are separate chapters on each round of betting. There is advice on how playing tournaments differs from playing cash games. There is a section on math and a section on psychology. There are some good digs at Phil Hellmuth, including the sentence "Phil wins a lot of chips because of his obnoxious personality at the table."

I'm glad I actually went out and proper bought a copy of this book instead of borrowing it off somebody, because I'm sure I'll be going back and rereading sections multiple times as I try to remember things while actually playing. Although one or two friends have expressed interest in borrowing it, which is acceptable as long as they give it back in a timely manner. I will be keeping records. Or perhaps I will stick a "for reference only" sticker on it and then people can only read it if they come to my house.

I'm probably not ready for the Little Blue Book yet, but I might buy it anyway just so I don't waste patio drinking season, and I can truly make 2016 my Year of Reading Poker Books at Bars.

Howard Lederer and Annie Duke are correct, in their introduction, when they say that this book was, at the time of its publication, unique. There have been poker how-to manuals probably as long as there have been people playing poker, but back in 2005, no one had written a more personal, “how I play”-style book. Now it's five years later, and Phil Gordon's series of poker books has been as influential as Super/System or Harrington on Hold'em, both to poker players and, more importantly (at least as it relates to this paragraph), to poker writers. “How I play”-style books are still uncommon, but certainly not unheard-of (Gus Hansen's Every Hand Revealed is my favorite of the new breed). Given that, does Gordon's original little book hold up, or has it been surpassed by its cronies?

It holds up quite well in this reviewer's opinion, thank you. Gordon does a solid job of explaining the basics of his technique (which isn't all that out of the ordinary; tight-aggressive is the style you're going to see from most pros, or would before the coming of Tom Dwan, who's spawned a legion of loose-aggressive imitators), giving you both the how and the why of its mechanics. Like the entire tight-aggressive legion, he focuses a lot more on pre-flop play—why see a flop if you can get everyone around you to fold beforehand?—but the post-flop section is just as useful as you'd expect from one of the post-flop masters of the game—Hellmuth, Negreanu, Dwan, or the like. About two-thirds of the book is devoted to specific aspects of the game, after which comes a “general thoughts”-style section and a handful of the usual starting-hands charts and the like.

It's good stuff, front to back (well, okay, I could have done without the charts; even Gordon himself minimizes their importance as much as possible). There are a bunch of really good poker books out there, and the literate poker player's shelf needs to be a pretty long one to accommodate them all; this one should be on that shelf. ****

This book is information-dense, but relatively clear to understand, though near the end there seemed to be some conflicting advice. I would recommend this book to an intermediate player, as there is plenty of terminology that is not introduced in the book with which you would need to be familiar. That said, this beginner has read other poker books before and only had to look up a few terms. My plan is to go back and place a Post-It note at a principle and practice it before moving on to the next until I can recognize the context and opportunities of each one.

This is a highly regarded poker book that comes up in just about any "Top Poker Books" list. It's an okay starting off point for a beginning player. Might be a little basic for someone who has read a few decent poker books before. I've seen that Phil Gordon has some more advanced follow up books. It might be worth checking them out soon.

Having read this book in small parts from time to time, I believe it is a good way of reading the book by just skimming thru the pages until you see a chapter with an interesting title:)Any poker book is a good read!

That was good. Kind of a cliff's notes of several other books.

Hands down the best poker book available. A must read for any player.