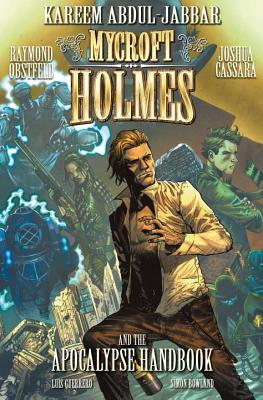 There’s an extensive, and ever-growing, library of Holmesian pastiche that explores the more obscure (or, if not obscure, at least less well trod (trodden?)) corners of 221B Baker Street. James Moriarty and Irene Adler in particular have benefited from this Cumberbatchian upsurge in love of all things Sherlock, as has Sherlock’s not-so-beloved brother, the even more intellectual, less socially capable, and impressively corpulent Mycroft Holmes.

Ah, but wait—Mycroft’s carriage in this adventure, co-written by the man who did for goggles what Kelis did for milkshakes*, is far from portly; he’s a lean, mean, joke-making machine. And therein lies the rub with so many of this recent wave of Doyle derivations—to some degree or other, our hero (or anti-hero), be it Holmes, Watson, or any of the aforementioned trio, has a tendency to crack wise, coolly solve mysteries, and dabble, if not outright engage, in some romantic shenanigans.

Now, it’s not that I’m advocating for slavish devotion to the canon, because there’s only so much you can mine from what is a large, but ultimately finite, body of stories. But, other than sly nods to various Sherlock stories via veiled allusions or character names, this could just as easily have been called Indiana McClane Philanderer and the Action-Packed Mystery Solving Blow-Up Adventure.

So, as an extension of the Holmes universe, it feels a bit forced. As a rip-roaring action yarn with a reasonably clever story and an entertaining lead, it does just fine. We’ll call it just a tick below 3.5 stars.

*That’s just ridiculous—there’s no way Kareem Abdul-Jabbar** did for goggles with Kelis did for milkshakes.

**But, for those of you who don’t know, he remains the all-time leading scorer in NBA history, once featured the most unstoppable shot in the game (the sky hook), and is a versatile and intellectual writer and commentator. So there’s that.***

***Pretty sure Daniel Day Lewis could totally drink his milkshake, though.

Mycroft Holmes is an insufferable prick, who asspulls explanations in major infodumps and beds married women. I can't say he's clever because an author that has a character make up an explanation and infodump at a crucial time (after a bunch of needless action) isn't being clever. And if you go back to try to look at all the supposed details and can't find them in the panels, well, how am I the reader supposed to be expected to solve the case alongside the "hero"?

What makes this fail is Holmes. He's an awful, awful character, all horrible antihero without a shred of likability (though the way he acts, it's as if he's God's gift to mankind - and women). I mean, it doesn't make Lark a complete walking cliche (though her backstory is interesting) better nor the fact Queen Victoria flounces to meet him, arms akimbo, more tolerable, but if there would have been one shred of redemption in Holmes, it would have made this at least not as awful. Honestly, I don't even see why Mycroft Holmes needed to be in this - most of it is set in the US (!!!), which seems a stupid call for a beloved ENGLISH icon.

To throw a bone at this: The art was okay.

Post Script: Can anyone explain why Kareem Abdul-Jabbar chose to write a comic about Mycroft Holmes? Seems the most non-sequitur choice.

This book was fun. I know, a book about the apocalypse should not be considered fun, but Mycroft is hilarious. We all know him as Sherlock’s smarter brother but I never thought he would be sexier, too. Great characters, great art.

Wow, this literally could not be more different than the Mycroft Holmes prose books that Jabbar has also written. I genuinely find it hard to believe they are written by the same person, and am pretty sure they aren't even meant to take place in the same universe based on a few disparities.

This story features a younger version of Mycroft so I guess some of his juvenile behavior makes a bit of sense, but I cannot in any way see this man who sleeps with his professor's wives and calls Sherlock 'Shitlock' can turn into the nuanced and interesting character that I am enjoying in the prose books. I mean it's basically like if the next season of Archer was set in Victorian England / the Old West and for some reason everyone was calling Archer 'Mycroft'. Oh and there is this ridiculous scene where Sherlock gets flustered seeing a naked woman and she goes 'it's elementary biology' and then there's just a panel of Sherlock going 'elementary ...' which is so godawful that I feel like Moffat must have ghost written it.

The sole reason this is getting three stars instead of two is because I actually like the version of Irene Adler that shows up in issue 3, but she is pretty much the only enjoyable thing here.

I have to admit, I was largely curious about Mycroft Holmes due to its NBA superstar author. Like, how would that play into the writing? Answer: not at all. Which, in all honesty, is for the best here, since Mycroft Holmes takes place in Victorian times, well before basketball broke through.

Abdul-Jabbar's version of Mycroft plays off the line from the original Sherlock Holmes that Mycroft is the older, far more intelligent brother who works for the UK government. Naturally, this just means that Mycroft is even more perceptive than Sherlock - not to mention sexually adventurous, liberal-minded, and nearly suicidal in his exploits. This volume follows Mycroft from Oxford classroom to a meeting with Queen Victoria in a storehouse of futuristic weapons to America, where he clashes with Jesse James, a female bounty hunter, and some anonymous guy who's trying to sell said weapons (and take over the world? I don't know. The antagonist was a mess).

Overall, it's fast-paced and intermittently fascinating. Abdul-Jabbar does a good job of explaining how Mycroft is able to use tiny details to come to broad conclusions, but he also uses this crutch almost every other page. Like, I get that Mycroft is smart, but maybe let him fail once? As a result of the main character being mostly superhuman, there wasn't a whole lot of tension. But the story still hums along nicely. And the art is quite good, especially the settings and color. Character designs beyond the main characters were a little same-same - I guess all Victoria era men (aside from Mycroft) had brown hair, medium builds, and voluminous mustaches.

Reasonably fun adventure, but barely identifiable as a Holmes story. If the protagonist had been Sherlock instead of Mycroft, or a generic action hero instead of either, it would change nothing. Moriarty having a niece was a neat thought, but went unused.

Meh. Interesting artwork, but the story is cliched and choppy.

I guess he thinks of himself as a lovable rogue, but he only comes off as the most irritating person you've ever met. He knows he's smarter than everyone else, he patronizes everyone and has no sympathy for anyone. Fine. That's how these Holmes-brothers often are depicted, and that's why we all love them. But the problem is that Mycroft doesn't have any redeemable qualities whatsoever here.

To take examples from a couple of screen adaptations; In "A Game of Shadows" Mycroft is a bit of a pompous weirdo, but still friendly, and in the BBC series he is a control freak of dictatorial magnitudes, and yet his motives are either to protect his brother or to prove that he can do some good too (despite what his parents think).

It is a bit of a problem, as I see it, to make Mycroft an action hero instead of a behind-the-desk, holding the threads in the shadows-sort of person. As soon as he steps out from the Diogenes Club with a gun in his hand, he inevitably has to compete with Sherlock. By being the older "cleverer" brother, he also has to outshine him in his own filed of expertise. Mycroft becomes an exaggerated version of Sherlock (here with the added unlikable characteristic of being a notorious womanizer), instead of being something of his own. And let's face it - Sherlock can be irritating enough as he is...

To me it would have been more interesting had Mycroft been his usual pen-pushing old self, and then been forced to go out on the battlefield against his will. The stakes would certainly have been higher that way. As is, he really doesn't have anything to lose and there is never any doubt of him succeeding in the end.

It irritates me further that Adler puts up with him through the entire adventure (even if she hits him a couple of times, he still ends up having the upper hand). She tells him about her background and having her entire family slaughtered, and Mycroft can't even be bothered to act compassionate. A short while after he tells her about his mother and that Sherlock thinks she was murdered, and to this Adler immediately feels sorry for them. Why? Would she really? How is Mycroft's story sadder than hers?

On a less nitpicky note, I do like the idea of a story about what Mycroft may have been up to in his youth. I also have to say that the artwork is very nice. The movements are vivid and the colours and shadows give great depth to each image.

...Mycroft does have a very punchable face, though...

Mycroft Holmes, in this original story in graphic novel form, is a smug little sh*t. I love him.

He's not quite the same character as in the mystery novel Mycroft Holmes - he has a different back story with a different fiancee - but he's still his annoyingly superior, know-it-all self, and he's still quite competitive with little brother Sherlock.

This is an all-new adventure involving a cache of sci-fi weapons and an evil plan to auction them off to the highest bidder. Queen Victoria wants to be the highest bidder so the British Empire knows these steampunk weapons of mass destruction are in safe hands, and Mycroft has passed enough of her tests to become her agent.

In this he's assisted by Lark Adler, an American bounty hunter. Is she related to Irene? An older cousin, perhaps? We don't know. There is also mention of a respectable maths professor named James Moriarty.

I don't know if any more comics have been written in this series, but these five issues make for one intriguing graphic novel. The art is eye-popping and the story is fast-paced. This is a fine entry into the world of Holmesiana.

Picked this up because Kareem Abdul-Jabbar is a cool and interesting dude. It was alright - a steampunk, American-centric envisioning of Mycroft Holmes (although the Holmes brothers hitting up the US is hardly a new idea). I love Sherlock Holmes as a character but think his real weaknesses get revealed when characters try to connect with him emotionally and hit a wall, and Mycroft is the same way. He thrives best in Arthur Conan Doyle's stories, where he usually keeps distance from his clients and uses his deductive powers with a professional remove. Too many people tried to "get" Mycroft in this story and you scrape the bottom of his emotional well so quickly. I get why authors do it - it's a very modern stylization to get into a character's backstory and what matters to them, and the BBC TV show hits the rocks when it tries to do the same thing. The world of Sherlock Holmes is delightful and obviously compelling to writers through the ages, but it made the most sense in its own cultural context.