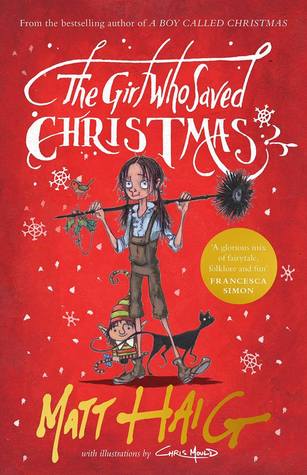 The Girl Who Saved Christmas (Christmas, #2)

JOURNEY TO THE EDGE OF MAGIC

If magic has a beginning, can it also have an end?

When Amelia wants a wish to come true she knows just the man to ask - Father Christmas.

But the magic she wants to believe in is starting to fade, and Father Christmas has more than impossible wishes to worry about. Upset elves, reindeers dropping out of the sky, angry trolls and the chance that C JOURNEY TO THE EDGE OF MAGIC

If magic has a beginning, can it also have an end?

When Amelia wants a wish to come true she knows just the man to ask - Father Christmas.

But the magic she wants to believe in is starting to fade, and Father Christmas has more than impossible wishes to worry about. Upset elves, reindeers dropping out of the sky, angry trolls and the chance that Christmas might be cancelled.

A captivating and spellbinding historical novel for children set in the Victorian era featuring an appearance by Queen Victoria herself. A young chimney sweep, Amelia writes to Father Christmas asking primarily for help for her seriously ill mother. She is full of hope that her wishes will come true, but she is the only one. However, in Elfhelm, trouble is brewing with unhappy elves and trolls wrecking the North Pole with the intention of getting Christmas cancelled. Father Christmas is tested to the limit in his efforts to get matters under control. Amelia's world collapses when her mother dies and she finds herself at the worst workhouse in London. It is run by the nightmarish Mr Creeper who makes Amelia give up her cat, her beloved Mr Soot to Charles Dickens. A griefstricken Amelia facing misery and cruelty understandably loses her way and her hope for a while. Father Christmas needs her hope to ignite the magic so that Christmas can take place, and comes to find her as her spirits revive in time to save Chrismas for the world. This magical tale by Matt Haig makes for perfect material to read to children in the festive season. It is beautifully illustrated by Chris Mould throughout. Many thanks to Jamie Norman at Canongate for an ARC.

Slightly less than one year ago, I read Matt Haig’s “A Boy Called Christmas” and fell in love with the story he had created. This year I’d hoped to finally get a copy of his “The Girl Who Saved Christmas” to read, I’d been so enchanted by his first Christmas novel.

”Do you know how magic works?
“The kind of magic that gets reindeer to fly in the sky? The kind that helps Father Christmas travel around the world in a single night? The kind that can stop time and make dreams come true?
“Hope.
“That’s how.
“Without hope, there would be no magic.
“It isn’t Father Christmas or Blitzen or any of the other reindeer that make magic happen on the night before Christmas.
“It’s every child who wants and wishes for it to happen. It no one wished for magic to happen, there would be no magic. And because we know Father Christmas comes every year, we know now that magic—at least some kind of magic—is real.”

But, this wasn’t always so, and there were years where no stockings were hung, before hope was in the air, or in the hearts and minds of children.

Victorian England features heavily in this story, you’ll see Queen Victoria in these pages, as well as Charles Dickens, a cat named Captain Soot, and a girl named Amelia Wishart, who was the one who saved Christmas, but almost stopped believing in the dream of magic.

Sadly, she’s fallen on hard times – the kind of hard times that only could happen in earlier times, a time like the Victorian era, the era that Dickens wrote about in her favourite book of his, Oliver Twist.

I loved this, from the flying pixies, the truth fairy, elves and the trolls, to the occasional nod to Dickens, the occasional use of Victorian era words rarely used, such as ‘skilamalink.’ I even loved the font that was used for this, and – of course – the marvelous illustrations, courtesy of Chris Mould, which are delightful.

I loved that this book is truly meant to be read to children, but has enough charm for adults reading this to remember the wonder of the holiday season as though they are seeing it once again through their own eyes as a child.

Hope is such an important thing to have, especially for children, to hold onto. I loved this message most of all, for without hope, there is no faith in anything – religious or otherwise – it is the belief in what could be. It is necessary in order to achieve anything, and everything, in life.

“Life is like a chimney - you sometimes have to get through the dark before you see the light.” 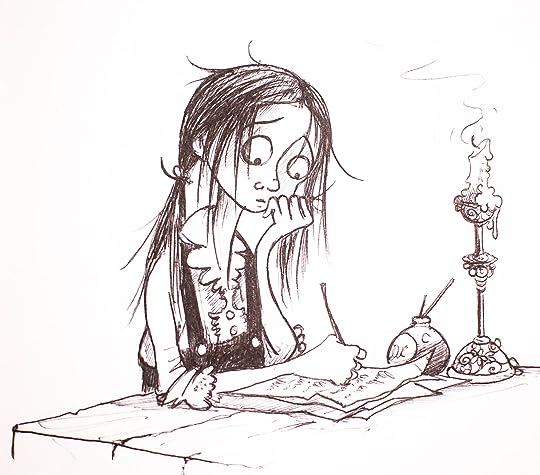 Didn’t enjoy this one as much as I did A Boy Called Christmas.
It was still fun and cute and Christmassy. But some part where drawn out and a bit uneventful.
I did however love that Matt gave the great mister Dickens such an important part to play in this story. Who better to believe in the magic that Father Christmas requires?

These are fun stories and I will most definitely read them all, repeatedly every Christmas.
I adore the Illustrations. 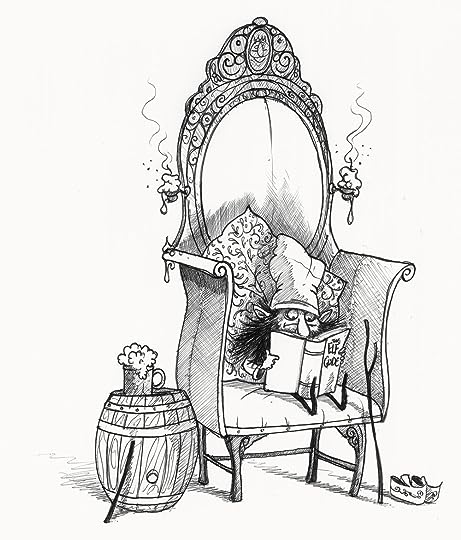 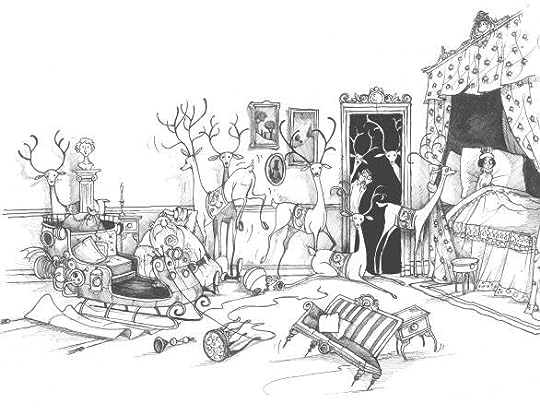 *4.5 stars rounded up. The second installment in Matt Haig's Christmas trilogy is a treat for kids of all ages! Nikolas (Father Christmas) is having trouble getting Christmas off the ground, literally! First there is a troll attack that nearly destroys Elfhelm and cancels Christmas for that year. Then he finds there is not enough hope in the world to help him work his magic!

His most staunch believer, nine-year-old Amelia Wishart who lives in London, is losing hope. Her mother has died and she has been taken into a workhouse which is run by the mean Mr Jeremiah Creeper, who believes 'a child needs to know manners and discipline.' Father Christmas, on the other hand, believes there are three ingredients of life: happiness, laughter and play. Can Nikolas save her from the evil clutches of the system?

There are many fun scenes in the story. When Amelia is taken into the workhouse, her cat Soot is cared for by none other than Charles Dickens! Guess what inspires him to write his Christmas story. And Father Christmas has a slight accident when he first gets his sleigh off the ground and lands in Queen Victoria's bedroom!

The book is filled with fun, adventures, some evil characters and trolls, but plenty of joy and happy messages and is sure to delight any middle-school-aged child. Now on to book three: Father Christmas and Me!

Can't wait for the Christmas when I can read these with my grandson! At 2-1/2, he already appreciates the cool illustrations by Chris Mould, whose artwork also graces each cover in the trilogy.

Sweet and wise, like its predecessor, A BOY CALLED CHRISTMAS. Made to be read aloud - preferably to a child on Christmas Eve - but failing that, to someone you love, on a dark night, with wine.

Utterly charming! Of course, you know me: any book that includes Charles Dickens as a character rises high in my esteem at once! And especially books about Christmas! About hope! And magic! And eating gingerbread!

I read the first book several years ago, I liked it a lot, but it was a bound manuscript and didn't have the art, and now I need to get a finished copy of that to read to the kids next year! They all loved this, and the art is darling!

So cute, festive and christmasy <3 I needed a story like that to cheer me up and bring back my faith in magic! Thank you, Matt Haig!

What a wonderful children's book to place in a Christmas stocking! It is going to be a toss up between my granddaughter and grandson (9 yrs) as to who is going to read this book first. Perhaps my grandson, as he has a wonderful imagination and i can envision him being caught up in this story.

Even as old as I am, I must admit to enjoying the story. Loved the illustrations, which were plenty. It took me back a few years to my childhood, where i used to read similar stories. I rarely write what a story is about for fear of spoiling for others, but I do highly recommend.

So pleased to have won this book recently in a Goodreads First Reads giveaway.

The story of Amelia Wishart, the first child ever to receive a gift from Father Christmas. Her hope made that first visit possible, because with hope comes magic, as we learning in Haig's first book, A Boy Called Christmas. 10-year Amelia's mother is very ill, and Amelia is trying to fill her shoes as a chimney sweep, along with her black cat, Captain Soot. She writes Father Christmas for help, who cannot help as Christmas is sabotaged by the trolls. Then tragedy strikes, and Amelia is sent to a workhouse (by the evil Mr. Creeper), where she loses all hope, threatening the subsequent Christmas as Father Christmas does not have enough magic to stop time to deliver presents. He cleverly figures out Amelia needs to be rescued as do some of his elf helpers.