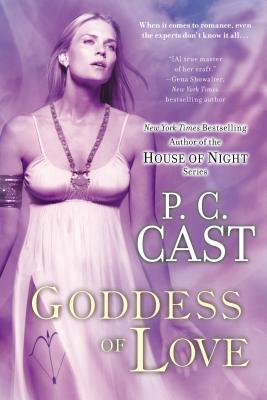 The story of the mythical Venus who comes to life to help a nerdy woman find her inner goddess.

Pea Chamberlain needs a makeover-shoes, hair, clothes, make-up-if she wants to attract an übersexy fireman. And who could better coax Pea out of her pod than the Goddess of Love, whom she invokes in a moment of desperation?

Venus works her magic on Pea, but who will help her w The story of the mythical Venus who comes to life to help a nerdy woman find her inner goddess.

Pea Chamberlain needs a makeover-shoes, hair, clothes, make-up-if she wants to attract an übersexy fireman. And who could better coax Pea out of her pod than the Goddess of Love, whom she invokes in a moment of desperation?

Venus works her magic on Pea, but who will help her when she falls for that same sexy fireman? Could Venus need a love makeover for herself? Check out the five-alarm heat when the Goddess of Love unexpectedly loses her heart.

I am so happy to get to re-read The Goddess Summoning books again. They are some of my favorite books. I've always had a fascination with the Goddess of Love... maybe most girls do. I love how Venus is bored with life on Olympus and wants to help a mortal woman by giving her a makeover and helping her find love. While she does this, she discovers even more than she expected about herself.

I LOVE the ancient world and the modern world being combined. It makes for a great story. One that I know I'll re-read for a third time in a few more years.

This series is my favorite from P. C. Cast but this "Goddess of Love" was such a deception!

The book was so poor that I'm really here trying to know what to say about it and nothing seems to pop up...

I know that this is just a story and all but... what was P. C. Cast thinking to put the main character farting in a restaurant (yes "fart" is not a typing error) and expect us to believe that Vulcan (God of Fire) sees it and likes the girl!!!!
For God sake!

I don't want to talk about this book anymore.

P.C Cast is one of my favorite authors because she is one of the first I ever read and loved. The way she writes her books makes me feel like we are close friends or like she is my second mother. Her goddess summoning series will always hold a place in my heart because it truly does have a beautiful underlying theme of love filled with mutual respect and living life like the goddess you are inside. Its cheesy and often times annoyingly unrealistic but it is also beautiful. This particular book in this series disappointed me. I can usually get past P.C Casts cheesy quirks but this time I just couldn't do it. I don't feel like going into detail about what I didn't like about the book, mostly because i'm lazy but also because I don't want to disrespect an author I hold so dear to my heart. I will say that if their was a one book in the this series I would recommend skipping, it would be this one. It wasn't awful! If it was I would have given it one star. It was just disappointing.

This kind of disappointed me in several ways but I really liked it in some ways.

1. how is EVERYTHING supposed to work out so perfectly?!? Well i guess i should be glad, since I was super sad at the bittersweet ending in Goddess of Light :-/ meh...

But the ending somehow bothered me, it reminded me of The Host by Stephenie Meyer 8l (now I feel like re-reading it to compare.)

2. EMBARRASSING. THE BEGINNING BROUGHT SHAME TO EVEN ME :( POOR PEA but I guess it just shows harsh reality in the making.

Those are probably the two most annoying things I found about this book.

But if you're looking for some hot/sweet lovemaking and true (maybe) love then this is perfect for you.
I really liked Pea and Hephaestus ^^ (er ... Vulcan I mean.)

Didn't finish. Life is too short to waste on horrible books.

Confidence is probably the moral of this story. Confidence in yourself and being confident in love. If you start doubting yourself, well then... You make mistakes and you have regrets.
These series has really got me thinking about myself, like feminity, my confidence and srlf-esteem, my love life, and my regrets (just to name a few lol). This book was a great addition and really picked up the slack from the last book "Goddess of the Rose", which was disappointing to me. "Goddess of Love" is impressive like "Goddess of Spring" and it gives me hope that this series is about to end with a bang!
The characters in this book were the most relateable to me and actually had me rooting for them! Especially Pea, who I felt wasthe epitomy of a lot of girls and women in this world. The girls who feel invisible and overlooked, who are talented and amazing, but arent ones who command attention like the tall blondes that men seem to constantly worship in the world. This book speaks to women like that with small quotes and big lessons to bring into the real world. I loved it!
I recommend this book and this series to all who want a little magic in their life.

Warning...Venus is so hilarious in this book with her use of colorful curses involving the god's genitalia...that you will laugh so hard you cry, or spit your drink out all over the pages. So don't have a beverage while reading this book!

I loved this book, absolutely loved it! The four main characters pulled me in and just when I thought all hope was lost, P.C. Cast does what she does best and made the ending even more imaginable than I could have ever imagined. The two main men in this book are HOT, HOT, HOT, (and not because one is a fireman and the other is the God of Fire)!

Absolutely a great read. I was captured by the characters and the story moved along at a great pace. There certainly were not many, if any, slow spots. Goddess of Love is one that I will have to reread and soon.

Are you one for the Greek Mythology ? Adore all those Gods and Goddesses up on Mount Olympus ? What about Time travelling novels ? PC Cast's Goddess Summoning series has something for everyone as it takes a modern world , everyday situation and somebody like us mere mortals and mixes it with the supernatural and fantasy of Gods and Goddesses with magical powers. In Goddess of Love we meet Pea Chamberlain , she is the director at the local community college handling all the adult education classes, she has always found herself the invisible one and when she's not being invisible , she continues to make a fool out of herself. Over in the Land of Gods and Goddesses we meet Venus - the Goddess of Love and Vulcan - The God of Fire , these two have not felt a love connection in centuries, their marriage based on platonic friendship. When Pea decides to unlock her inner goddess , she invokes an incantation that links Venus to her aid but little does she realise that Hera - mother of Vulcan has decided to play a little matchmaking of her own and send him into the Mortal world. Pea has her eyes on one man - Griffin, the hot firefighter but what happens when it seems that Griffin has only eyes for Venus ? Enter Victor aka Vulcan, can he show Pea the love that she has yearned for and will Pea accept Vulcan for who he is ? What will happen though to the two couples when it is time to return the Gods and Goddesses back to Mount Olympus ? It is here that we will see the sacrificial element of True Love.
A wonderful book and one that as I enjoyed the past 4 books look forward to reading more in the series. Beware though that as this book is situated around the Goddess of Love there is more than it's average dose of sexual references.

Another novel by Ms. Cast that is nothing fascinatingly great besides being sweet and funny.

For Goddess Summoning series, my average remark is 3 stars. This one, as you can see, falls below the average.

Like always, there are plenty of unrealistic girly talks that are more suited for chick-lit. There is a reason why I don't like chick-lit after all. Pea's intellect sticks persistently on that scale so even if I find it hard to beleive that a middle-age woman will talk like this, I do not exactly mind.

Venus, however, alternate between silly chick-lit school-girl and ancient goddess. It is just confusing to my poor brain.

My main problem though, is that this book is thoroughly sexist. And no, readers, it is not females that are looked down upon but males. The part where Venus goes divine-goddess on Griffin is Exhibit A. Griffin just found out that his girlfriend is a freaking Goddess after all, it is beyond incredible that he believes it as a fact in one conversation but to expect him to accept it after those measely sentences? Unbelivable.

It is always a hit-or-miss with Ms. Cast's need to down-play males and 'up-play' females. I'm afraid Ms. Cast just overdoes it in this one.