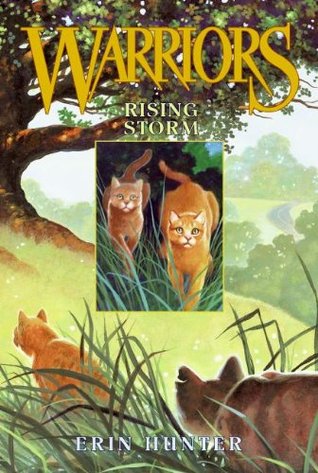 Yes, yes, I know, another five-stars on a Warriors book. Well, this one deserves it. It picks up immediately at the end of book three (Forest of Secrets), and goes through the toughest time when ThunderClan is in fear. Once again, the end leaves you shocked and reaching for the next one. Don't they all?

style="display:none" I thought it was interesting, not as good as the other books in the series. Fireheart is deputy now and he is being haunted by an old enemy that still lurks the forest, but now something is going wrong with his leader, Bluestar, she has suddenly lost her face in their ancestors. But one night when the clans come together, Fireheart finds out something that could lead to the destruction of all the clans...

I honestly don't know.
There are great things about this series but damn it's frustrating.
Nothing ever gets resolved.
Maybe I'll continue. I'll have a break and decide next week

*SPOILERS*
Do not read past here if you don't want to spoil the book for yourself.

This book was heartbreaking, I was thoroughly enjoying it until Yellowfang wanted to help Fireheart rescue the elders and Bramblekit. I knew it was going to happen as she is on the cover with the fire behind her. I knew she wasn't going to live and my heart was beating so fast as I read on. Then they found her alive and I was so happy and I felt like crying with joy but then, then, she did die. MY HEART, WHY WOULD YOU DO THIS TO ME? I love Yellowfang, I am honestly devastated she died, I couldn't stop crying :(

Then, oh my... That ending, I finished this at about 12:30 am last night (I'm writing my review late I know, I've been busy today.) and I already wanted to pick up book 5 and read on about Tigerclaw and the gathering. Erin Hunter just had to leave us all hanging, didn't she?

I rate this 5 stars because it was thrilling and I never wanted to put it down.
It was by far the best Warriors book I've read. (I've only read 4 so I'm sure they will get even better than this!)

Well, sorry, but this is another 5 star in this series! There are not many children books that I rellay do love, but this series is one of them. It started a bit slow, maybe because I've waited to long after the 3rd book, but then it picked up the pace.
The cats are so well described with their emotions, that I'm still grieving after the deaths of certain cats. The end, well, that was one with a bang and it makes me to continue the series.
I think, these are the sorts of books that makes children want to read and make them want to read other books too.

Such excitement and character growth. This series is relaxing. ^.^ I enjoy the description and plot structure. Highly recommended for younger readers or ppl who just need a relaxing middle grade fantasy.

fireheart finds his nephew geting food from twolegs. one day he gets stolen from the forest. Fireheart is devistated until one day ravenpaw tells fireheart where he is. fireheart will do anything to save his beloved nephew.

I loved this book for the action. It is full of battle and it makes you want to keep reading. There are also amazing cliffhangers and plot twists.

Find this review and more fantastical things at The Leaning Tower of Tomes.

So I’m gradually making my way through rereading all the Warriors books. Rising Storm is book 4 of the original arc, and it’s definitely not as exciting as the previous three, what with Tigerclaw’s evil scheming and Tigerclaw himself not being very present in this book. Still, Rising Storm was a quick and entertaining read, despite focusing too much on Cloudpaw’s bratty behavior and Bluestar’s worsening condition.

In this book, the overlying threat to the Clans is a sickness that has swept ShadowClan. Fireheart, ThunderClan’s deputy, and Cinderpelt, the medicine cat apprentice, are the only cats who know of the sick ShadowClan cats who are recovering in ThunderClan territory. Honestly, I would have preferred the illness to be a bigger plot point, perhaps even spreading to the other Clans in a few cats here and there. This plot point felt almost sidelined was disappointing.

Then there’s Fireheart’s apprentice Cloudpaw… In future books, I love Cloudpaw, when he finally becomes a warrior. But his apprentice days are certainly rough. Cloudpaw is the epitome of a lazy, rude teenage boy, and he drove both me and Fireheart crazy. I had very little sympathy for Cloudpaw when karma hit him, especially since almost the whole book revolved around his bad behavior. I understand how hard it was for Fireheart, as Cloudpaw, being his nephew and his apprentice, was a reflection of him, but I really wanted the book to move along in terms of Clan politics and overall plot. I wasn’t in the mood for a misbehaving apprentice.

And third, Bluestar. Wowzers, Bluestar is a completely different person — er, cat. She’s a shell of herself, completely traumatized by the betrayal of Tigerclaw. She’s barely a leader, she’s making Fireheart make most of the decisions. She’s bitter, she’s angry. She’s not the Bluestar I loved back in the early books. It’s painful to see her in such a bad state, and obviously very painful for Fireheart and the other cats closest to her.

A few things I did really like about Rising Storm were the developing relationship between Fireheart and Sandstorm, Ravenpaw’s cameo, and everything to do with Yellowfang and Cinderpelt, because medicine cats are awesome, and often the wisest and most patient cats in every Clan. There are sad moments, as undoubtedly we lose a few cats through the story, and one death in particular really hit me hard.

Rising Storm is one of the weaker books in the Warriors original arc, but it was still an enjoyable, quick read. It’s a book that forces Fireheart to take on more leadership duties, which will be very important in the immediate story’s future. This book isn’t nearly as political as the previous three, and actually not as dark in that regard, but I would say it’s a good book for character development. Onto book five, A Dangerous Path! ♦

Have you read Rising Storm? If you haven’t, would you be interested to? What’s a book you’ve recently read that focuses more on character development than plot? Comment below letting me know! And, as always, happy reading!

Have you ever gone through a time where you lost every one you grew up with? Fireheart is now a deputy of Thunder clan and has more weight under his shoulders than ever.The threat from Tigerclaw has faded away, but thunder clan still fears him and he has left his mark on the clan. The clan thinks Tigerclaw is not going to attack again but Fireheart is on high alert. The elders are fearing for the worst as he was not announced as deputy till after moon high.

Bluestar is still shaken and not her former self and she relies more and more on Fireheart , the clan worries that she is not going to last long and that she would not be a effective leader. Fireheart misses his apprentice and will do anything to find him back, but his mind and body is focused on feeding and protecting the clan as Bluestar is not as strong as she is. Meanwhile Cinderpaw now Cinderpelt is becoming more like her mentor Yellowfang and becoming a impressively good medicine cat and doing he clan well.Fireheart, still sleeping gets a dream and in his dream he sees Spottedleaf the old Thunder clan medicine cat and smoke, then when he wakes up he sees fire and orders the clan to run to the river. Then he finds out that they left two kits behind so he and Yellowfang went back towards camp alone to save them. Will the be saved and will they die?

This book is a great book and it has twists and turn so it makes it a exciting book. But it has a lot of sad parts and it is really touching but Fireheart makes every thing back to normal and makes the clan reunited which I like. This book is great for thrill seekers and people who really like books that make them not want to stop reading it.