What do I need to say? Read them, understand them, and give thanks.Also let me recommend, treasure, protect, and pray we keep them, unbroken.Please.

How many Americans can say they've read the Constitution? My guess is probably not many. And those that have only did it for school and have since forgotten much of what they learned. Personally, I remember having to memorize the Bill of Rights for a class, but that's about it.

So I bought a copy of the Constitution for myself and began reading it. It's important now more than ever that we read and understand it.

Solid opener, but it dragged on a bit too long. I'll keep an eye on the work of this Thomas Jefferson fellow.

It is nearly impossible to review such an important historical work. In my opinion this is one of the most important documents in history. 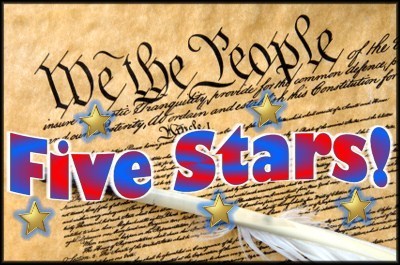 Something everyone should read as a child in school to study, and then again as an adult. Especially with the political climate the way it is.

Everyone including me has read this repeatedly for school. So I knew this would be bad, but I didn't know how bad until I went through it underlining everything negative and circling everything positive. Why the Cato institute publishes this, and why it is handed out at libertarian events completely escapes me.

I will omit things too minor to note. Asterisks rank importance.

Lets skip the declaration since its meh. Its way better than the constitution though. I'll just note that the consent of the governed stuff is good, but that a bunch of their complaints are retarded (like, the "you wont let us cross the appalachians and steal native american land" complaint and the "fuck quebec" complaint).

Preamble: States the purpose of the constitution as establishing a "more perfect union", promoting the "general welfare" (vague and grants unlimited interpretation), and also "ordains" this constitution on the residents of the 13 states and their "posterity", which is not only bold but also very rude to the unborn masses.

Article 1:
***Sec 1: establishes Congress as the firm which has a monopoly on law.

**Sec 3: decrees that the head of state can only be tried via mechanisms internal to the firm: Ie Senate has a monopoly on legal practice of impeachment, and severely legally constrains the limits of what the Senate may do to an impeached President.

Sec 6: Senator and Representative salaries are set by law. They are also exempt from arrest during attendance in session, with the exceptions of Treason, Felony, and Breach of Peace.

****Sec 8: Grants Congress the power to tax, lay tariffs and excises for the purposes of "national defense" and "general welfare" (Grants Congress the power to steal money to do whateverthefuck they want). Grants Congress the power to borrow money, regulate commerce within the nation and with other nations, print money and establish it's value (ironically, it also monopolizes the punishment of counterfeiting), create post offices and roads, "promote the Progress of Science and useful Arts" via maintaining intellectual property laws (or "the exclusive right to discoveries" as the document says), declare war, grant letters of marque, raise and support armies and navies, call forth the militia to SUPPRESS INSURRECTIONS and repel invasions, to arm and organize said militia, to maintain a total legal monopoly over the Capital district, to build forts, magazines, arsenals, dockyards, and "other needful buildings" (any building). Monopolizes the legal definitions of naturalization, bankruptcy, piracy, and felony on the high seas. Permits congress to make all laws "necessary and proper" for carrying out all of the above and all of the below.

***Sec 9: Allows Congress to suspend Habeas Corpus during REBELLION or invasion, allows them to tax (different tax this time),

Sec 10: prohibits any given state from doing any of the above (as if this monopoly wasn't already abundantly clear) and forbids any state from entering into an alliance or confederation.

Article 2:
***Sec 1: invests the executive power in the President, prohibits foreigners from becoming president.
***Sec 2: Establishes the president as commander in chief of the military and militia. Allows him to grant pardons, make treaties, and appoint ambassadors.

Article 3:
*****Sec 1: Establishes a monopoly on legal interpretation in the judiciary/"Supreme" Court.
***Sec 2: Confirms that this monopoly extends to all areas of law.
***Sec 3: defines treason as (among other things) "adhering" to America's enemies, or giving them aid/comfort.

*****Article 6: Declares "This Constitution... and all laws which shall be made in pursuance thereof" to be the supreme law of the land, and binds all judges in the country to uphold it (prohibits independent judges from existing).

Then the Bill of Rights is generally a lot better. No need to get into it.

Given all of the above it is apparent than an unemotional reading of the constitution reveals the following: It establishes that the government has a monopoly on legal interpretation, the creation of laws, the provision of security, the production of currency, and all the basic functions of civil society. Its vague wording furthermore allows the government to invade any area of life which the above document does not already take hostile possession of. This is an explicitly authoritarian document and should be spit on by any self respecting libertarian, or dignified human being.

"But whether the Constitution really be one thing, or another, this much is certain — that it has either authorized such a government as we have had, or has been powerless to prevent it. In either case, it is unfit to exist." -Lysander Spooner

Pretty good, but it should include women in the sequel.

Two very important documents in American history that I was introduced to as a child. I hope that every American has read them at least once. They are the foundation our Country was built on and the ones that we must do all we can to protect today.

These documents were part of the required reading of my American history and civics classes. While being historic they are still documents that play a major part in my everyday life.