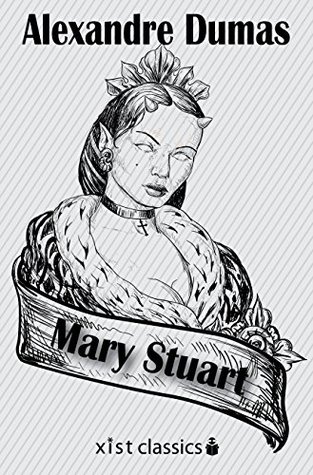 I was very much impressed by the things I have learned of Mary Stuart, queen of Scotland and dowager of France, throughout the reading of this ebook. The end of her life was really tragic – I am obliged to confess that I am unable to imagine what a world was during those times. To be dead of a violent death after nineteen years of suffering and captivity. I could simply say that it is the greatest misfortune that could befall her. Moreover, the order is signed by her, Elizabeth I queen of England, who describes herself with the words “I have a woman’s frame, but in this woman’s frame beats a man’s heart.”
From the beginning, as the crafty Dumas (pere) introduces us into the subject, it looks there is a truth in saying that some royal names are predestined to misfortune. In the midst of this unlucky race, Mary Stuart was the favourite of misfortune, and indeed it has perfect sense what one biographer said of her, “whoever desires to write about this illustrious queen of Scotland has, in her, two very, large subjects, the one her life, the other her death.”
I found the book pretty informative in a pleasant way, and I feel it helped me frame into my mind some historical events, that are now even better coloured. With the exceptions of some mid-book chapters, the most part of the book is written in the form of giving a detail account of what happened with this queen, in the full bloom of her beauty, since the moment she quit France for Scotland, somewhere in 1561. It was a sad sea voyage and from the start accompanied by a sad omen, that cast a black veil over the entire book. Well, no wonder why the book is under the sub-title “celebrated crimes” – a series of 18 books by the same author.
The aim to pacify her kingdom, greatly divided by religious troubles, and to reign over there in her wild country, was indeed a great challenge, unfortunately with an unhappy finish, but, as the story tells us, she had to fulfil her destiny. I tried to follow somehow attentively the details given on the religious wars, on the plots, assassinations, political difficulties and complications triggered by these, although I was a bit lost in all that long succession of names.
However I enjoyed very much those moments where the writer gives enough space for some intimate dialogues, or those scenes when the characters display some unbelievable courage, all of them had made a lively impression on my mind, and kept my general enthusiasm, even if on some spots it was a bit reduced because of some boring presentation of historical facts and events.
I liked the statement that the writer made, could be of course an exaggeration but it doesn’t change a bit my sentiment, regarding what was indeed Mary’s great and real crime: “one single imperfection in face or figure, and she would have not died upon the scaffold.”
This was a good read, though unawares something strange and tragic came to pass. I didn’t expect it to be such a sorry story, somehow I was deceived by appearances, but it’s a worthy material for a bit of education, if not profound at least varied, to maintain a supple mind and a lively imagination in gentle ways. There is a lot of violence too, and I have to admit I had some trouble to overcome all those first impulses to pass quickly over the text. I cannot comment how well Dumas kept in line with the history, as officially presented in the books of the time, however I am sure that even the most clear-sighted historians may remain obscure on some points.
The book in itself surprised me very nicely and I am for sure to remember about Mary Stuart, if not all - though I cannot yet detach from the story flow -, at least all the charms of her wit and beauty, and that fatal love she felt for some people that she was never able to surmount. She was a fascinated woman, and with that eternal confidence of the woman in her own love, she gave afresh, now and then, proof of her folly, despite having been cruelly wounded. I guess that comes in line with the majesty of her rank and the beauty of her countenance. Or, maybe it’s just about spending part of the night gazing in the immensity of the heavens…

Wooow; what amazing & deep words!
I like it so much.

‏ Goddess, who shalt never die,
‏ List to what I say;
‏ Thou who makest me to lie
‏ Weak beneath thy sway,
‏ If my life must know
‏ Ending at thy blow,
‏ Cruellest!
‏ Own it perished so
‏ But at thy behest

Classified as fiction, but it reads more like a 19th Century "true crime" docudrama of 16th Century events. I'm not sure whether Dumas serialized this or when he was writing it, stopped partway through and then returned to it later. For the first 100 or so pages, it's pretty much straight history, allowing for the author's assumptions/preferences and contemporary (or near-contemporary) rumors being stated as facts. At that point, it becomes more like a novel, with large blocks of dialogue and statements about the characters feelings. Then, after about another hundred pages, it goes back to more or less "straight" history for the rest of the book, briefly going back to dialogue for a few pages at time. A quick read and not terribly inaccurate - certainly Dumas takes much fewer liberties with the history than do the writers of The Tudors or Reign.

Julie Christe reads Dumas! What more do you want? Seriously though, this is a pretty good, if historically suspect, story about Mary Queen of Scots.

Focusing on the life of Mary Stuart after she left France to return home to reign in Scotland, this book of history certainly proved a more interesting read than the last I reviewed, a free version from Amazon. Yet where that work stuck strictly to facts, Dumas' version took a number of liberties which improved the reading but made the separation of fact from fiction a challenge.

Dumas frequently inserts speeches of great melodrama into the mouths of those he writes about, including small details not likely to be recorded in historical documents. Then, too, there were several points that were written counter to what I had previously read, such as the deaths of the two Douglas boys that helped Mary to escape. Though I do not know for certain which is correct, the fact that this version led both to die in a far more dramatic manner actually calls its veracity into doubt.

Ironically, some of the things I would like to have seen expanded upon, such as her mistreatment by her second husband, were passed over with only a sentence or two of explanation. Then, too, very little was said of her son as a child; one must imagine she would have referenced being torn from him so young. But then, perhaps this was not a concern for Mary.

Overall, this was more enjoyable to read than a dry history (though its age does make the tone more tedious). But the reader is required to put much care into the things they accept as fact. It makes for a good overview of Mary's power struggle, even as it provides supposed details.

Mary Stuart Queen of Scots was held captive for 19 years before being sentenced to the block by her cousin Elizabeth the First. The former's Grandma, Margaret Tudor, was the elder sister of the latter's dad, Henry the VIII.
Dumas tells of the deadly games of power that cost the candid and badly counseled Catholic Stuart her reign, and eventually her head, at Fotheringhay Castle, 70 miles north of London. Conversely, the Protestant Queen of England portrait is devastatingly cruel and calculating in her design to eliminate any obstacles to the crown.
There were abundant cries from Catholic camp that Henry VIII had married Anne Boleyn before his divorce had actually come through. Therefore Elizabeth would have been an illegitimate and the nearest legal heir to the English throne would have been Mary, Queen of Scots.
Regrettably, Dumas report leaves several crucial questions unanswered such as why Mary would choose to flee to England once escaped from the her Scottish conspirators on the first place.
Puzzling.