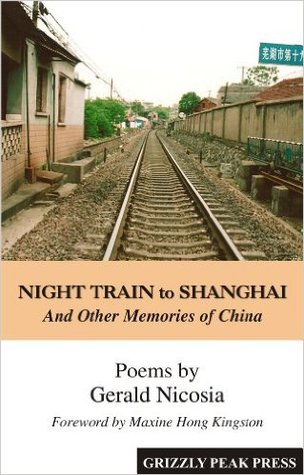 Gerald Nicosia is the well-known biographer of Jack Kerouac in his ground-breaking biography on the beat legend called Memory Babe (Memory Babe was Kerouac's nickname as a young man owing to his prodigious photographic memory). Memory Babe is hands-down the best-written and most exhaustive biography on Kerouac ever published. If you are interested in Kerouac or the beat at all, you owe it to yourself to read that book some day. Essential reading.

This was my first time to read Nicosia's poetry but I was not disappointed. The occasion for writing these poems was a trip to China that the author made with his adopted daughter whose ethnicity is Chinese.

This book is a mixture of discoveries by the author travelling to a mysterious land for the first time, reporting on his observations, joys and disappointments with both China and his own country, the US, as he compares the two in his mind and on the page. This book is more than just that. It is also a book of discovery and confrontation for his adopted daughter, Amy. Amy must confront her birthplace Wuhu, and somehow deal with all these conflicting emotions, emotions of both excitement to see the city where she was born but at the same time deal with the terrible feelings of abandonment by her parents. There is a beautiful poem in this book called 'Guangji Temple, Wuhu' which is one of the high-points of Night Train to Shanghai. It was an incredibly auspicious occasion as the monks from the town performed a special chant for her, for this girl whose name means 'Lucky' in Chinese, and someone who went to America (a land of promise and plenty in the eyes of the Chinese as well as a country they fear will one day invade them) and managed to return to the town of her birth. The monks view this as nothing short of magical.

There are many good poems in this book but for me, the real 'clincher' was a poem called 'Three Buddhas' which comes to a conclusion with a brilliant summary of the wisdom that the author has learned from trying to obtain the perfect "white jade Buddha of [his] dreams". What I loved especially about this book was how the final few lines of each poem gave a perfect summation of the main point of each poem. As I was reading some poems, I wondered where Nicosia was taking me but then wham! the punchline reached out and hit me right between the eyes. Brilliant.

One thing I slightly disagree with is Jerry Kamstra calls the 32 poems of this collection "extended koans." Yes, a few of them share characteristics of the 'koan', a Japanese Buddhist term which loosely translates as 'riddle.' Other poems are just simple, rhythmic, exuberant, expressionistic poems that capture any given moment on the author's travels through China.

There were two other things I really admired about this work: 1) while this is undoubtedly a book of poetry, it is also at the same time a kind of 'journal' in which each poem serves the function of a small chapter of the whole trip; and 2) the last poem absolutely floored me when I realized what the author had done. The final poem is called 'Coda: Sunday morning in Maui.' The closing lines are "Everything is suffused / with a cool, eternal blue / The unchanging light of the gods / The way we kill each other / It would seem / This is really the world we want." Here the author is in the middle of the Pacfic Ocean, roughly at the midpoint (geographically speaking) between these two huge nations, the US and China, on the way home, and metaphorically he is thinking about the two countries 'meeting each other halfway' in the interests of peace and mutual understanding and respect. The work finishes with a masterful touch. And so as the French say 'chapeau!'

A great book, which I recommend to everyone.
So why only four stars? First of all, I very rarely give five stars in general and secondly, I suspect that the author is capable of even greater heights. But make no mistake, this is absolutely worth reading. Much has happened between China and the US since these poems were written, especially recently with the Coronavirus spreading across the globe and affecting people's health, the economy and political relations, which have become strained between these two countries. One of the underlying messages I implicitly felt, coming away from this book, was of the importance of mutual understanding and respect, in the greater interests of Mankind and our survival.