Notice: Trying to get property 'slug' of non-object in /home/bukrate/domains/bukrate.com/public/book_detail.php on line 23 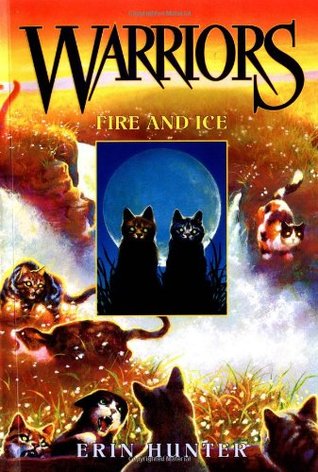 "(He) felt lost and alone without his old friend, though he barely recognized him anymore. He wondered if they could ever be friends again."

This second installment in the Warriors series is, to me, even more gripping and compelling than the first. Whichever Erin Hunter wrote this novel tackled some deep and complex interpersonal issues, including loyalty to oneself and one's people, friendship and the painful barbed obstacles that can come between even boon companions, the effects of love (both old and new) on one's life, and what it means to feel alone and significantly different from everyone else.

The author navigates these thorny subjects with skill and tender feeling, allowing the reader to identify with the characters on a deeply personal level. Along the way plot revelations are made and surprising developments come from the new relationships that are formed.

Fire and Ice does an excellent job taking the reader further into the fantasy world of the cat clans and keeping a high level of interest. I'm impressed by both book and author.

I would give three and a half stars to this novel that so surpassed my expectations.

"It's not easy being different."

I thought this book was exciting because they brought one of the enemy Clans back home after they were driven out. Then Firehearts first apprentice was hit by a "monster" (car) and it was a trap for the clan leader Bluestar, and Fireheart can't convince Bluestar that it was a trap. I would reccomend this book to people who like to read books that follow another like its repetative you know whats going to happen. (FYI: This is my second time reading this series that should tell you how good it is!:)...).

Continuing to reread the series and I'm enjoying it. :)

I enjoy how this author writes her books, she doesn't recap everything that happened in previous books. And Book 2: Fire and Ice started up right where book 1 left off. I enjoy reading the Warrior books and at the moment can't seem put them down. :-)

Well, It's been awhile since I've read this but, like all the other Warriors books I found this to be a very exciting read. This is the second book out of the original Warriors arc, and and it continues from where the last ends. I don't think I'll get too detailed into the plot or else I'll be writing for ages, but it's definitely not just your typical kids book about cats. It's so detailed and the plot is very cleverly thought out. As you progress through the books, you become really attached to the characters. There is mystery, good, evil, secrets and love. AMAZING. It's a must read! But read the first one before you read this one. These books are best read in order.

Adored this one as well. I don't know why I'm so attached to these warrior cats, but they hurt I hurt.


APPRENTIFES ONLY OPEN ONCE A QUEEN GIVES BIRTH


I WILL MAKE OTHER CLANS WHEN THIS ONE IS FULL TO 100 USERS AND PLZ LIKE THIS LET'S GET THIS REVIEW TO 111 LIKES OF MORE AND MAYBE I WILL MAKE THE OTHER CLANS SOONER.....

Cute kittens are cute. But still there are also lots of serious and somber moments. But never the less if you like cats this an fun read.

And it's always fun to read about kittens having fun, meow meow :D

Fire and Ice is a children's fantasy novel, the second book in the Warriors series, written by Kate Cary under the pen name of Erin Hunter. The plot centers around Fireheart and Graystripe, newly promoted warriors of ThunderClan, which is one of the four groups of feral cats living in the wilderness. Fireheart learns that his best friend Graystripe has fallen in love with Silverstream, a warrior from RiverClan, even though it is against the cats' "warrior code".
The book was first published on June 1, 2003 in the US as a hardcover. Since then, Fire and Ice has been released in paperback and e-book format in other languages. The main theme of the book is that the type of person one is inside is more important than the way one seems from the outside. The book received mixed reviews: the negative reviews criticized the flat characters, and how troublesome it was to flip back to the characters list due to the large number of cats; positive reviews praised the suspense and rising tensions in the book.

Fire and Ice takes place in a fictional forest which is home to four Clans of wild cats, ThunderClan, RiverClan, ShadowClan and WindClan, each of which lives in a territory best suited to their skills. The authors based the forest on New Forest in southern England.
• Fireheart is the main protagonist of the book. Originally a house cat named Rusty, he left his human owners to become an apprentice in ThunderClan. He is sent with Graystripe to find WindClan, who were chased out of their home by ShadowClan. Later, he realizes that Graystripe is in love with Silverstream, a warrior in RiverClan. Although he advises Graystripe against meeting her secretly, Fireheart agrees to keep it a secret.
• Graystripe is Fireheart's best friend. After receiving his warrior name, Graystripe is sent with Fireheart to find WindClan, who were chased out of their home by ShadowClan. During a patrol, Graystripe is saved by Silverstream, a RiverClan warrior, when he falls into the river, and almost drowns. As a result, Graystripe and Silverstream fall in love and begin to meet each other in secret, against Fireheart's warnings.
• Silverstream is a RiverClan warrior and the daughter of RiverClan's leader, Crookedstar. After saving Graystripe from drowning in the river, the two fall in love. Since the warrior code forbids cats from different Clans to be in love, they begin to meet in secret, sneaking out of camp in order to see each other.
• Tigerclaw is the main antagonist. Tigerclaw had previously killed his own Clanmate, Redtail, in hope of taking Redtail's place as deputy. Instead, Lionheart becomes deputy, but he too, later dies. Tigerclaw then finally becomes deputy. Only Fireheart, Graystripe and Ravenpaw know of Tigerclaw's plans, but they do not tell anyone out of fear of him.

Fire and Ice begins with Fireheart and Graystripe performing a traditional silent vigil after their promotion to warrior status in Into the Wild. As their first task as warriors, Fireheart and Graystripe are assigned to find and bring back WindClan, which had been driven out by ShadowClan, and bring them home. They succeed, finding WindClan under a tangle of Thunderpaths (probably a highway interchange), and bring them home.
Soon after, Bluestar apprentices Cinderpaw to Fireheart, and Brackenpaw to Graystripe. During a hunting patrol, Graystripe almost drowns after chasing a vole onto thin ice, falling in the river separating RiverClan and ThunderClan, but is rescued by Silverstream, a RiverClan warrior. Graystripe and Silverstream fall in love; however, this is against the warrior code, a code of honor that all warriors must follow. Fireheart discovers their relationship, and unsuccessfully attempts to discourage them from seeing each other. Graystripe finally agrees to meet Silverstream only at the full moon at the Gathering, when the four Clans meet to share news. Fireheart, later realizes that Graystripe has not been keeping his promise. Because Graystripe is often gone to see Silverstream, Fireheart takes over training of Brackenpaw, as well as training his own apprentice.
Tigerclaw, in his ambition to become leader, sets a trap for Bluestar by the Thunderpath (road), intending to kill her, thus bringing him closer to becoming leader. Instead, Cinderpaw is crippled by the trap. Her leg is broken, and when it heals, she has a permanent limp, preventing her from becoming a warrior. She then trains under Yellowfang to become a medicine cat.
Fireheart is reunited with his sister, Princess, a kittypet living in a Twolegplace (a human town). Princess gives Fireheart her oldest kit, Cloudkit, to take into the Clan as a new apprentice. Although Fireheart agrees to accept the kit, his Clanmates, with the exception of Frostfur and Graystripe, are reluctant to accept him because of his kittypet blood. Bluestar allows him to stay, and Brindleface becomes his foster mother.
Brokenstar, the former ShadowClan leader, eventually attacks ThunderClan, along with several other exiled ShadowClan warriors. After the battle, the rogues are driven off, with the exception of Brokenstar himself, who is blinded by Yellowfang and is kept as a prisoner. When Fireheart suggested to kill the evil cat, Yellowfang refused, sadly revealing that herself is Brokenstar's mother.
Later, ThunderClan becomes involved in a fight against RiverClan and ShadowClan when RiverClan and ShadowClan unites and tries to drive WindClan out again, and WindClan allies themselves with ThunderClan. When Fireheart is attacked byLeopardfur, the RiverClan deputy, Tigerclaw watches as Leopardfur and Fireheart fight, and does not attempt to help Fireheart. Silverstream attacks Fireheart but releases him; he attacks her but sees Graystripe's look of dismay, and releases her.Darkstripe witnesses the event and reports it to Tigerclaw. Consequently, Fireheart becomes certain that Tigerclaw is not to be trusted.

The main theme of Fire and Ice is that "it doesn't matter where you come from, only who you are inside". Fireheart is challenged by other cats because he was once a kittypet (house cat), despite having proven his loyalty and bravery as a warrior. Similarly, Cloudkit was initially not accepted by the Clan because he had kittypet parents. Other themes include loyalty, betrayal, and forbidden love.

Michelle Sedai of the Brown Ajah

Essentially, this is a story about suspicious loyalties: Graystripe is in love with a RiverClan she-cat, and may well bring the wrath of both Clans down upon him; not least of all, he may well sacrifice his best friend in the process. RiverClan and ShadowClan seem to have formed a secret alliance, and if so, what does it mean for the other two Clans?

This is Graystripe’s story; specifically Graystripe and Silverstream’s story. It’s sweet on one hand, and annoying on the other; Sweet because love knows no bounds, and annoying when RiverClan identifies a ThunderClan scent on their territory, but Graystripe still (potentially) puts his Clan, and himself, in danger by going back to visit Silverstream.

I can actually relate to Fireheart in this one; I know what it’s like to see someone I care about in a relationship in a less than desirable relationship and worry about their well-being. That sounds like a really deep meaning being assigned to a children’s book, but it does deal with a variety of issues through it’s characters, and I think we can all relate to this aspect at some point.