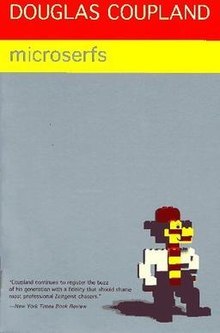 Narrated in the form of a Powerbook entry by Dan Underwood, a computer programmer for Microsoft, this state-of-the-art novel about life in the '90s follows the adventures of six code-crunching computer whizzes. Known as "microserfs," they spend upward of 16 hours a day "coding" (writing software) as they eat "flat" foods (such as Kraft singles, which can be passed undernea Narrated in the...

"...and when you meet someone and fall in love, and they fall in love with you, you ask them "Will you take my heart-- stains and all?" and they say "I will," and they ask you the same question and you say, "I will," too."
98 likes
"I used to care about how other people thought I led my life. But lately I've realized that most people are too preoccupied with their own lives to give anybody else even the scantiest of thoughts."
62 likes
"I saw doves and I thought they were rocks, but they were asleep. My breath made them stir, and they rocks took flight, the earth exploding... and my only thought was that I wanted you to see them, too."
60 likes
"Happy. And then I got afraid that it would vanish as quickly as it came. That it was accidental-- that I didn't deserve it. It's like this very, very nice car crash that never ends."
44 likes
"...most guys have about 73 calories of shopping energy, and once these calories are gone, they're gone for the day - if not the week - and can't be regenerated simply by having an Orange Julius at the Food Fair."
40 likes
"Anyway, I want to remember that love can happen. Because there is life after not having a life. I never expected love to happen. What was I expecting from life, then?"
39 likes
"I ma trying to feel more well adjusted than I really am, which is, I guess, the human condition."
39 likes
"Letting go of randomness is one of the hardest decisions a person can make."
39 likes
See All Quotes From "Microserfs"