Home › Authors › Michael Geyer › The Cambridge History of the S... 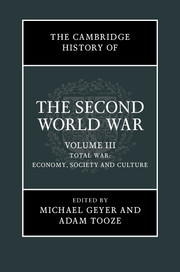 The third volume of The Cambridge History of Second World War aims to advance a history of WWII as an social, economic and cultural event on a global scale. It presents society, economy, and culture as forces in and of war. It centers on war-making, and posits the regional worlds of war as overlapping and interacting fields of force spanning the globe so that actions in one field impact on others and memories overlay each other. The authors regard the Second World War as a culminating moment in the forceful transformation of the world. What they have tried to do is offer in their respective essays is less a summation of of what we know than an invitation to explore what we should know and how we should tell the story of such a war.

The essence of the matter is that WWII was a war that engulfed entire peoples – their societies, their cultures, their economies. It was fought for and against peoples, and was, in short, a war of peoples. The first two volumes of the Cambridge History demonstrate that WWII was a high-intensity, battle-centric war. But they clearly show that it was also a war in which entire societies mobilized. What that means in practice is a key subject in volume III.
While governments managed this process with varying degrees of compulsion and suasion, mobilization also had to take place from the ground up. The war wasn’t fought simply in the name of peoples, and populations weren’t just a resource to be spent. Both as enemies and friends they were a force that all governments and all military organizations reckoned with. In this volume, the authors discuss the important questions that troubled the politicians and military leaders of the time, such as: Would people support the war?; Could people be bombed into submission?; Could women be trusted to mobilize in support of the war effort?; Would men and women fight to the point of self-distraction?
Peoples threw themselves into the war in immense mobilizations of society, economy, and culture, and they weren’t destroyed in military actions such as Strategic Bombing. WWII wasn’t fought only for the control of territory and resources, but rather for the annihilation of social utopias and political regimes. It was a war about mutually exclusive ideas of social order and about the ‘right’ to live.

The volume assesses that, in addition, the conduct, goals, and effects of peoples contending the war differed radically, and if entire peoples become enemies, this did not mean that all enemies were the same. Interesting example follows: the Nazis paid the farmers of occupied Denmark for their food deliveries, while gunning down thousands of Italian villagers for guerrilla resistance and starving the urban population of the USSR to death.

The authors aim to depict the Second World War as a project of transformation, as a clash of radical and revolutionary projects to remake societies, fueled by mobilizing peoples. They find a new, more apposite place for the history of extermination in this war, and present a better understanding of the term “totalizing war”.

For me, the last volume of the Cambridge History is it’s best. It deals with much more than explaining the nature of totalizing war. The authors analyze the natural resources as an important factor in waging warfare; they peek into the military brothels; they examine the subject of sexuality, so differently regarded in each of the belligerent countries’ armies; they brilliantly depict the aftermath of the war, the grief, the pain, and the losses that were omniscient. Very well done, with very insightful analyses.