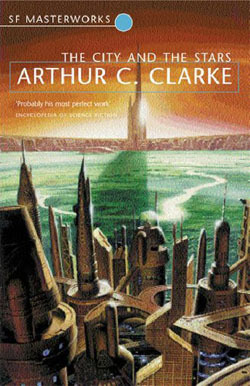 The City and the Stars

Clarke's masterful evocation of the far future of humanity, considered his finest novel.Men had built cities before, but never such a city as Diaspar. For millennia its protective dome shut out the creeping decay and danger of the world outside. Once, it held powers that rule the stars.But then, as legend has it, the invaders came, driving humanity into this last refuge. I Clarke's masterful evocation of the far future...

Quotes From "The City and the Stars"

"When the reality was depressing, men tried to console themselves with myth."
3 likes
"That suggested two possibilities. It was either too unintelligent to understand him—or it was very intelligent indeed, with its own powers of choice and volition. In that case, he must treat it as an equal. Even then he might underestimate it—but it would bear him no resentment, for conceit was not a vice from which robots often suffered."
2 likes
"Long ago the signalling had become no more than a meaningless ritual, now maintained by an animal which had forgotten to learn and a robot which had never known to forget."
2 likes
"He was still prepared to go on collecting all that life could offer, like a chambered nautilus patiently adding new cells to its slowly expanding spiral."
1 likes
"And yet, even while they baffled him, they aroused within his heart a feeling he had never known before. When- which was not often, but sometimes happened- they burst into tears of utter frustration or despair, their tiny disappointments seemed to him more tragic than Man’s long retreat after the loss of his Galactic Empire. That was something too huge and remote for comprehension, but the weeping of a child could pierce one to the heart.
Alvin had met love in Diaspar, but now he was learning something equally precious, and without which love itself could never reach its highest fulfillment but must remain forever incomplete. He was learning tenderness."
0 likes
"Carente de contacto con el mundo exterior, era un universo en sí misma."
0 likes
"Las líneas borrosas y confusas, los colores inciertos y opacos demostraban que, si el artista no conocía su meta, las herramientas más milagrosas no eran capaces de lograrla."
0 likes
"Ésa era la respuesta formal; después de escucharla con tanta frecuencia, perdía todo sentido, reducida a una secuencia de sonidos sin significado especial."
0 likes
See All Quotes From "The City and the Stars"