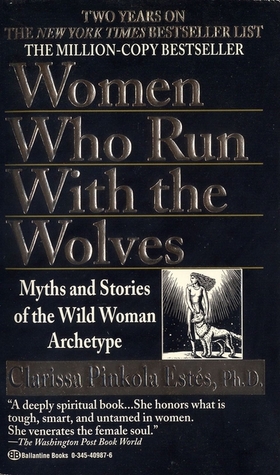 Women Who Run With the Wolves: Myths and Stories of the Wild Woman Archetype

Within every woman there is a wild and natural creature, a powerful force, filled with good instincts, passionate creativity, and ageless knowing. Her name is Wild Woman, but she is an endangered species. Clarissa Pinkola Estes, Ph.D., Jungian analyst and cantadora storyteller shows how women's vitality can be restored through what she calls "psychic archeological digs" in Within every woman there is a wild...

Quotes From "Women Who Run With the Wolves: Myths and Stories of the Wild Woman Archetype"

"It is worse to stay where one does not belong at all than to wander about lost for a while and looking for the psychic and soulful kinship one requires"
504 likes
"There is probably no better or more reliable measure of whether a woman has spent time in ugly duckling status at some point or all throughout her life than her inability to digest a sincere compliment. Although it could be a matter of modesty, or could be attributed to shyness- although too many serious wounds are carelessly written off as "nothing but shyness"- more often a compliment is stuttered around about because it sets up an automatic and unpleasant dialogue in the woman's mind.

If you say how lovely she is, or how beautiful her art is, or compliment anything else her soul took part in, inspired, or suffused, something in her mind says she is undeserving and you, the complimentor, are an idiot for thinking such a thing to begin with. Rather than understand that the beauty of her soul shines through when she is being herself, the woman changes the subject and effectively snatches nourishment away from the soul-self, which thrives on being acknowledged."

"I must admit, I sometimes find it useful in my practice to delineate the various typologies of personality as cats and hens and ducks and swans and so forth. If warranted, I might ask my client to assume for a moment that she is a swan who does not realzie it. Assume also for a moment that she has been brought up by or is currently surrounded by ducks.

There is nothing wrong with ducks, I assure them, or with swans. But ducks are ducks and swans are swans. Sometimes to make the point I have to move to other animal metaphors. I like to use mice. What if you were raised by the mice people? But what if you're, say, a swan. Swans and mice hate each other's food for the most part. They each think the other smells funny. They are not interested in spending time together, and if they did, one would be constantly harassing the other.

But what if you, being a swan, had to pretend you were a mouse? What if you had to pretend to be gray and furry and tiny? What you had no long snaky tail to carry in the air on tail-carrying day? What if wherever you went you tried to walk like a mouse, but you waddled instead? What if you tried to talk like a mouse, but insteade out came a honk every time? Wouldn't you be the most miserable creature in the world?

The answer is an inequivocal yes. So why, if this is all so and too true, do women keep trying to bend and fold themselves into shapes that are not theirs? I must say, from years of clinical observation of this problem, that most of the time it is not because of deep-seated masochism or a malignant dedication to self-destruction or anything of that nature. More often it is because the woman simply doesn't know any better. She is unmothered."
476 likes
"I hope you will go out and let stories, that is life, happen to you, and that you will work with these stories... water them with your blood and tears and your laughter till they bloom, till you yourself burst into bloom."
471 likes
"Sometimes the one who is running from the Life/Death/Life nature insists on thinking of love as a boon only. Yet love in its fullest form is a series of deaths and rebirths. We let go of one phase, one aspect of love, and enter another. Passion dies and is brought back. Pain is chased away and surfaces another time. To love means to embrace and at the same time to withstand many endings, and many many beginnings- all in the same relationship."
412 likes
"Having a lover/friend who regards you as a living growing criatura, being, just as much as the tree from the ground, or a ficus in the house, or a rose garden out in the side yard... having a lover and friends who look at you as a true living breathing entity, one that is human but made of very fine and moist and magical things as well... a lover and friends who support the ciatura in you... these are the people you are looking for. They will be the friends of your soul for life. Mindful choosing of friends and lovers, not to mention teachers, is critical to remaining conscious, remaining intuitive, remaining in charge of the fiery light that sees and knows."
392 likes
"Be wild; that is how to clear the river. The river does not flow in polluted, we manage that. The river does not dry up, we block it. If we want to allow it its freedom, we have to allow our ideational lives to be let loose, to stream, letting anything come, initially censoring nothing. That is creative life. It is made up of divine paradox. To create one must be willing to be stone stupid, to sit upon a throne on top of a jackass and spill rubies from one’s mouth. Then the river will flow, then we can stand in the stream of it raining down."
370 likes
"The doors to the world of the wild Self are few but precious. If you have a deep scar, that is a door, if you have an old, old story, that is a door. If you love the sky and the water so much you almost cannot bear it, that is a door. If you yearn for a deeper life, a full life, a sane life, that is a door."
335 likes
"The way to maintain one's connection to the wild is to ask yourself what it is that you want. This is the sorting of the seed from the dirt. One of the most important discriminations we can make in this matter is the difference between things that beckon to us and things that call from our souls.
Nowhere can this be seen more clearly than in the choice of mates and lovers. A lover cannot be chosen a la smorgasbord. A lover has to be chosen from soul-craving. To choose just because something mouthwatering stands before you will never satisfy the hunger of the soul-self. And that is what the intuition is for; it is the direct messenger of the soul."
319 likes
See All Quotes From "Women Who Run With the Wolves: Myths and Stories of the Wild Woman Archetype"