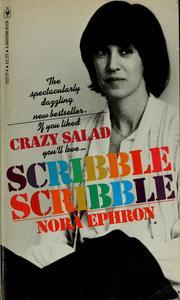 Scribble, Scribble: Notes on the Media

This volume is a collection of the columns the author wrote for Esquire magazine from 1975 to 1977. Her subject was the media, especially print journalism.

This volume is a collection of the columns the author wrote for Esquire magazine from 1975 to 1977. Her subject was the media, especially print journalism.

I bought this book decades ago in a used bookstore (remember them?). I was familiar with Ephron from her movies and her novel Heartburn, which I periodically pick up for its casual, seemingly effortless voice (especially if my own writing seems awkward and cumbersome, like this sentence).

The book reprints 24 articles Ephron wrote in the mid-1970s for her monthly media column in Esquire. There's also one article Esquire refused to run, presumably because it touched on the magazine's libel and out-of-court settlement practices.

There's a wide range of subjects. Ephron will sometimes look at people associated with a publication, like Dorothy Schiff, publisher, editor and owner of the New York Post, where Ephron got her first big break, or Brendan Gill and The New Yorker (one of the most savage take downs in the collection).

Other times, Ephron will put a publication itself under the microscope: the new, fledgling People Magazine, for instance, or the glossy, aspirational pages of Gourmet or the New York Times' food sections. One of the funniest pieces dissects a little-known periodical called the Palm Beach Social Pictorial (the name kind of says it all). In a self-indulgent low point, Ephron even writes about her apartment building's circulated bulletin.

My favourite articles – and the ones, I think, that have the most lasting value – examine ethical issues in journalism. Should a photographer have taken pictures of a mother and daughter falling off a fire escape during a fire, as Stanley Forman famously did in 1976? What constitutes conflict of interest for a food critic (her story about New Orleans critic Richard Collin is a doozy). Should sources be paid to appear on television? If American Express picks up the $4000 tab for a Craig Claiborne meal and the Times puts the article on page one, is that okay?

What's most exciting about the book is watching Ephron experiment. "The Making Of Theodore H. White" is a note-perfect parody of the noted historian's fussy, pretentious prose. "How to Write a Newsmagazine Cover Story" satirizes cookie cutter celebrity profile writing. Her article on the long-running British soap opera Upstairs, Downstairs is a whimsical, chatty piece that shows what she would accomplish later with dialogue.

In fact, reading this collection all the way through, you can sense Ephron becoming disillusioned with the media. There's too much emphasis on celebrity, she tells us, and journalists themselves are becoming celebrities.

In a year or two she would soon break through with her own screenplays and movies, bringing her wise, wry voice to a much larger audience. But I'm glad to have Ephron's articles and essays around to know what was going on decades ago, and to know that there was someone with a major B.S. detector writing about it.

I had to reread this before sending it to the library book sale. I cannot, of course, get rid of it without rereading it first. Clearing some space on my shelves is going to take awhile.

I enjoy Ephron's writing, though I'll probably (reread and then) get rid of Heartburn, too.

The columns collected in this book were written in the mid-70s. I don't know if it's the time distance from that period or the New York/D.C.-centrism of the pieces that confused me - there were many references to people or events that I just didn't recognize. I was certainly able to read and enjoy the pieces without knowledge of these references, but they caught me up. It works well as a window into the era of the 70s, and also into the world of journalism.

It seems as if many whom have given fewer stars have done so because the topics of Ephron’s essays are too topical of the time. As a book published in the seventies and compiled of essays written in the seventies about the world of journalism in the seventies, it was exactly what i expected. Some subjects were well-known to me, others were new. But overall, this book proves that Nora Ephron’s voice was always Nora Ephron, even before Heartburn and Hollywood. If you enjoy Ephron or snapshots from the last heyday of print journalism, give it a read. Five damn stars from me.

Nora Ephron apparently used to write a media analysis column for Esquire back in the 1970s. So this book is sort of a time capsule - she's commenting on the NYC-Washington media world largely, and American media at the time. So - newspapers, magazines, occasionally television. A lot of the people she mentions in this book are already dead. The ghosts of Watergate hang over this. There are times when there's a "Network" vibe. A lot of the big names that get mentioned - Clay Felker, Daniel Schorr, Theodore H. White, Russell Baker, Evans & Novak - are hardly remembered.
But it's Nora Ephron writing about it, so everything devilishly clever and keenly observed. Her parody of White's "Making of the President" style of writing is funny to anyone familiar with the books. She is scathing about the idea of journalists becoming celebrities. One piece - on how to write a news magazine cover story - was hilarious in a "you had to be there" way. She writes of newspapers long dead and you get the feeling of a historian of the Roman Empire recounting all the long-dead intrigues.
On the early People magazine: "It's almost not worth getting upset about. It's a potato chip. A snack. Empty calories. Which would be fine, really - I like potato chips. But they make you feel lousy afterward too."
Of Dorothy Schiff, publisher of the New York Post: "Every little whim she had was catered to. Her yellow onionskin memos would come down from the 15th floor, and her editors, who operated under the delusion that their balls were in escrow, would dispatch reporters."
One piece includes Nora's recipe for Beef Borscht. She writes a lot about food. Her collection of Gourmet Magazine. Her obsession with the British TV series "Upstairs, Downstairs." Most of this would probably seem like it was written in a foreign language. And there are the seeds of the future. One piece about how the Detroit News reported on a congressman's sex scandal, castigates the paper for paying attention to someone's private life in a way that would not play well today. I have really enjoyed this book, because it has no idea of what awaits it in the future - news staffs stretched thin, the great old newspapers stripped and repurposed, no expense accounts, the constant refrain of "NOW! NOW! NOW!" when reporting.
There's cleverness and sophistication to her style that was expected in those days on deadline, but they had time. An hour here or there. Discourse was on a slightly higher plane. Competition was a different animal. I'm not saying it was a better world, but different for writers. And I got all of this for $1.25 at a second-hand bookstore. I got to smell distressed 70s era paperback paper on the yellowing pages. I got to imagine big presses and linotype and Time magazine style. Well, maybe not that. But it was a nice little retreat for a few hours.
-30-

3.5 As an historical record, you’ll find no better.

A fantastically cutting read. Such a clever narrative tone with a real voice to back it up! Hilariously honest, Nora Ephron held no prisoners.

This is the second part of a two-book ebook (Crazy Salad and Scribble Scribble: Some Things About Women and Notes on Media) by Nora Ephron and I liked it less that the first Crazy Salad: Some Things About Women. Both books are personal and funny with lots of inside baseball commentary--which can be a plus or a minus. The first one centered on the women's movement and I very much enjoyed my trip down memory lane. The second on media--not so much. I married a journalist, so was very aware of many of the personalities Epron writes about, but I just couldn't get into the behind the scenes gossip. She readily admits that she didn't write her columns to be "critiques" but more of a lens on behind the camera/press/microphone antics. I still liked it for its self-referential humility and sharp wit, but it didn't grab me the way the first book did.

There's no escaping Nora Ephron's inimitable style and with a collection like this it's probably best to dip in now and then rather than read it cover to cover as I did. My favourite was her essay on the Palm Beach Social Pictorial which led me to discover Cornelia Guest who dated Mick Jagger and posed for Andy Warhol. Another interesting article about Don Riegle a Democrat congressman who had a dalliance with a staff member on his payroll who had next to none professional qualifications but was obviously endowed with other attributes. This episode led to a hardly read and mostly forgotten cash-in called The Washington Fringe Benefit. Nora has some pet peeves and the collection has some pointed references to the rise of celebrity culture. Journalistic personalities are unable it seems to resist the allure themselves often becoming the story and losing that all important objectivity. Worth reading for sure but the dated topicality of people and places took some of the edge of my enjoyment off the finished product.

A much better collection or one unmarred by the transphobic essay that ended Crazy Salad, this collection of essays involves Ephron writing very sharp criticism of media and media outlets. It's another collection of previously published works, so the mix is by nature eclectic, but the different pieces range from very interesting book reviews of New Yorker figures to poignant and damning analyses of Watergate coverage. To the 2020 reader, what really comes through in this book is how much the medium maybe have changed in 45 years, but how little the presentation and weakness of corporate media ultimately has been. Individual references and essays do stand out, especially book reviews, but the methodology and total effect of this collection is in its way to cut through what was even at that point the total bullshit of mass media. Think Network in book form (previous to Network even!).

A good amount of this book felt over my head, given that much of what was discussed was from the '70's and '80's. However I still appreciated it for what it was and enjoyed getting a window into what was of importance to Ephron and many others during that time.