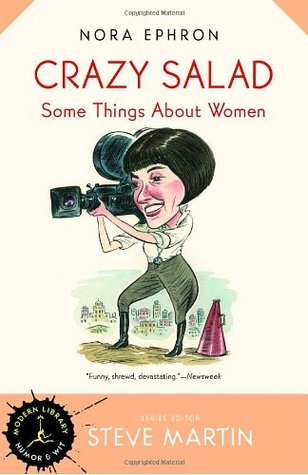 Crazy Salad: Some Things About Women

Portions of this book have appeared in Esquire magazine, New York magazine, and Rolling Stone.

Nora Ephron (1941-2012) is famous for her screenplays (Silkwood, When Harry Met Sally...) and films (Sleepless In Seattle, Julie & Julia), but I've always loved her for her prose.

She started out as a journalist, and this collection of essays about women, published in magazines like Esquire and New York in the early 1970s, contains lots of gems: some are funny, some are deadly serious, and all of them are clear-eyed, intelligent and written in her signature conversational style.

The collection begins with one of Ephron's classics, the candid and very funny "A Few Words About Breasts," in which she chronicles a lifetime of being flat-chested. The piece is chatty and full of anecdotes, but there's pain and anger simmering beneath the writing, including the final four-letter word (which would have been shocking in a general interest magazine in 1972). The tone of the piece reminds me of one of my favourite passages from her novel Heartburn:

Although many of the essay subjects might seem like obscure footnotes today, Ephron's writing is so good you'll be engrossed about everything from consciousness-raising (about which she is understandably skeptical) to minor Watergate figures.

One of my favourite articles is a profile of Bernice Gera, who was the first female umpire in professional baseball, but quit on the very first day she began. The way Ephron describes her Bronx apartment, full of baseball paraphernalia, and the horrific sexist behaviour she endured, is masterful and very moving.

And a long article about the marketing of "feminine hygiene spray" is a disturbing yet eye-opening look at Madison Ave's view of women.

Unfortunately, the book ends on a sour note, as Ephron reviews a book by Jan Morris, who was born James Morris. The world has come a long way in terms of acceptance of trans issues, and it's sad that Ephron's review is full of cheap shots and unfunny jokes.

That said, this entire book is a fascinating time capsule. How sad that Ephron's no longer alive to weigh in on some of the big issues affecting women and men – and non-binary people – today.

My friend Hannah lent me this book a little over a month after the passing of Nora Ephron. "Skim through it," she said, "you might enjoy some of the essays. You don't have to read all of it."

But of course Nora started this book with "A few words about breasts", and as soon as I finished reading that, I knew that I would read the book in its entirety, and quickly. Nora seems to be free of self-consciousness - she says it as it is without worrying too much about who will think what. This quality is refreshing, and maybe even rare, seeing that she must have been in her early 30s when she wrote these essays in 1970s New York. What fascinated me most about her writing was that every time, no no, every.single.time, she knew exactly how to finish every.single.essay at just the.right.note.

Are all these essays relevant to women? Do her conclusions stand the test of time? Did I identify with all the essays or have insight about the people she was talking about? The answer to all of these questions may be "no", but it really does not matter so much. I didn't know half the people she was talking about, I was not even born in those times, but I'm glad she took the time to give us a glimpse of what it must have been like in the early 70s, and to raise questions about women's lib and see how they translate to our personal lives, and to see that perhaps the more things change, the more they remain the same.

*
From 'A few words about breasts': "She [the boyfriend's mom] was, as it happens, only the first of what seems to me to be a never-ending string of women who have made competitive remarks to me about breast size. "I would love to wear a dress like that," my friend Emily says to me, "but my bust is too big." Like that. Why do women say these things to me? Do I attract these remarks the way other women attract married men or alcoholics or homosexuals?"

If you can get your hands on it, I recommend reading the original hardback/paperback issued in the seventies. You get all the essays in their completeness.

Before reading this book, I was only familiar with Nora Ephron from Sleepless in Seattle and You've Got Mail. These essays, unlike the movies, are not schmaltzy in the least. They are sharply observant, acerbic, and very funny.

I especially enjoyed her writings on the sixties/seventies women's movement. Although Ephron was a feminist and a supporter of the movement, she was also clear-eyed about its many shortcomings (for example, she questions the efficacy of "consciousness raising" rap groups. Too often the "personal is political" devolves into useless navel-gazing.)

Megan Daum recommended Crazy Salad when I saw her speak at Butler as part of their Visiting Writers Series last month. Ephron's influence on Daum's writing is evident. A good thing! Love their ears and eyes for social irony, and their habit of wrapping up essays with a tough question or a jewel of wisdom.

Learning about Ephron's work as a feminist activist and thinker give me a new appreciation for Sleepness in Seattle and You've Got Mail. Her passing is such a loss. We could really use her wit and sense of humor to make sense of these interesting times...

The essay in this book called "Miami" is one of the best things I ever read, basically it details how Betty Friedan picked the biggest catfight of all Feminism with Gloria Steinem, basically because she was so much thinner and prettier than she was.

I love that Nora Ephron told the truth about that, because it was that kind of behavior within Women's Groups at my own college that initially turned me off on the idea of calling myself a Feminist.

I've changed on that, and I say, don't let the bitches keep you from being a Feminist.

And I'm not being sexists, because you shouldn't let the bastards stop you from being a Feminist either!

I'm so sad Nora Ephron is dead. I'm so sad I didn't know more about her until she died.

It seems terrible form to give this book a bad review, but here I am doing it.

First things first: Nora Ephron was an amazing talent and hilarious voice. But if you're looking for a sampler of that wit that feels lively and relevant to today, I suggest you look elsewhere. "Crazy Salad" is not a collection that, for anyone born in the last 40 years, has aged terribly well.

Though a few excellent essays transcend time, many of the rest feel so dated and trapped in their own historical era that you half expect shag carpet to begin growing underneath your feet as you read it. (Want to read about the interpersonal dynamics between Bella Abzug, Gloria Steinem and Betty Friedan at the 1972 Democratic Convention? Don't worry - there are TWO essays in this collection that address this topic.)

There is no question that Ephron was an incisive writer and razor wit and I don't doubt this particular collection read great when it was published in the 70s but I think this book begs some editorial deletions (and combination with other collections) to be interesting to a casual reader today.

But I think its only for women. Not necessarily though. Men can read this book too but its too girl-y for me! And I could relate so much with Nora. Funny thing is that...I am always on with such sense of humor & do all these kind of stuffs everyday but somehow read & like Angst/Tragedy genre only! After reading this, I think I should start reading humor now!

And there were few parts which did not even affect me in anyway, may be because it was time period issue! I am 90s kid & 2k teenager so I might not get few points from an American in 60s to 80s era! Maybe...not sure though! My personal favourite chapter - Divorce, Maryland Style! I really found it funny but somewhere it was mix of emotions such as anger, sadness & hurt and that too ego hurt! #FunnyYetEmotional

All in all, a good book!

Crazy Salad - Nora Ephron Ephron amuses me, even if I don't always agree with her.


It’s been a long time since I read this, which I’ve wanted to do ever since the recent Ephron buddy binge with Veronica. But I couldn’t find our copy. And then I did! It was a housekeeping miracle.

These essays originally appeared in the early seventies for Esquire. So in turn, that ties back into the women’s college tour, and the Steinem emphasis of this spring.


I say “our copy”, but it isn’t: it’s the Spouse’s copy that he brought to the marriage. That makes this one of the reasons why I married him. The books and the feminist cred. Personal copy

This was going four-stars great (so many interesting anecdotes! pretty fascinating to see a woman's point of view on the women's lib movement as it was happening) until I got to the very last essay, which is filled to the brim with ignorant, unapologetic transphobia (from the author) and misogyny (from the transperson the article is about), which... well, really put a dampener on my feelings about the book. I'd have taken the rating all the way down to one or two stars save for the fact that this was written in the 70s, which isn't really much of an excuse at all.

I am really not in the mood to be preached to about how I should think and act. I've had enough of that this past year, thank you very much.