Home › Authors › John Lennon › Skywriting by Word of Mouth an... 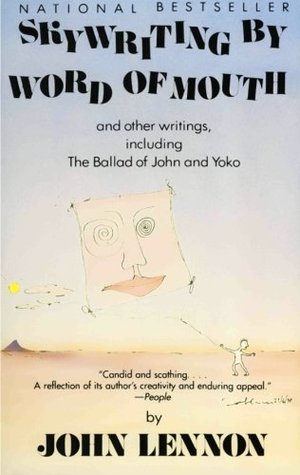 Skywriting by Word of Mouth and Other Writings

I am the biggest Lennon fan in existence so you may find this biased, but if you do (after having read the book that is) then you are a Lennon-hating hipocrit. It is without a shadow of a doubt a-fucking-mazing, I don't know how he does it. We get immersed in the work of one of the most brilliant people to date. Witty, funny, dark, light, heavy, sexy, raw, clever and absolutely entertaining are a few of the adjectives I dare use in description of this work of genius. I am noticing my words and laugh but my heart is full. It makes me so happy to have something so personal and eyeopening in my hands. Lennon proves his worth in a million ways. Such a romantic- complicated-twisty soul in such an advanced before-his-time person that is John. No story line whatsoever, the puns jump faster in ideas than chapters of organised nonsense, with English fit to fullfill his heart (minds desire). Totally completely and overwhelmingly in love with him, his music and now his writing. a must read.

I am a big Lennon fan. I am also a big fan of him and Yoko Ono, and I didn't, not once in my life, blamed Yoko Ono for breaking up the greatest band ever. This book was special to me because it was written by one of my idols, but that was never enough to give me a million stars for his book. The autobiographical piece, "The Ballad of John and Yoko" was phenomenal. It contained so many things a lot of people didn't know about him and his wife, and it gave me a piece of him as a person and not as the man many people worship. If only the whole book was about his life and his thoughts, this would havr been an awesome, awesome book. However, this contained many short stories and essays that were too deep and too weird for my tiny brain to understand. Some were amusing, but for the most part, reading the stories felt like watching "The Yellow Submarine" all over again - there was a story, but it was like being on a raft letting the current take you where it wants to take you.

Maybe reading the stories one after another was too much for me to digest. If I read one story a day, I might be able to fully understand it. Good thing I own the book. It will allow me to re read some pieces and maybe next time the rating will go up a star higher. For now, I will give it a safe 3 stars... but do know that the first article and his drawings were 5 stars for me.

A book of witticisms is what I would call this. You need a different kind of stamina to read this in one go. May invoke memories of Spike Milligan, if you are familiar with him that is. There were haha moments, hahaha moments and some sombre eloquence that only a Brit can come up with. There are some neat drawings the writings on which were scribbles from a scripture so I gave up deciphering those. Hope I have written enough to pique you red.

Man, I love me some John Lennon but this was just an incoherent string of brain farts and puns. Sure, once you dissect the sentences you find some clever little plays on words and the odd mildly amusing/witty line, but on the whole I found it unreadable. In His Own Write is similar (short nonsense stories), but more enjoyable because each story is illustrated and had more structure/coherence than this.

The first 30-odd pages (the autobiographical stuff: "The Ballad of John and Yoko") is great though: John's thoughts on his relationship with Yoko, protesting for peace, creativity, and breaking up with the Beatles. Those pages are definitely worth a read for Lennon/Beatles fans.

I really liked the autobiographical sections on him and Yoko Ono.

Then came his part amusing, part nonsensical musings which gave the reader glimpses into the psyche of this very talented artist. I skimmed through some of those as they can get repetitive, and I gather he might be high on mushrooms or other processed plants when he wrote some of them.

Not to say they weren't fun to read though. They could be, depending on your mood and/or perhaps how much cough syrup/hash you're currently inhaling.

This book is great at showing how to use conjunctions in a more creative way and therefore scores and seven years ago I first read it. I suggest this book to everybody of evidence as an example of John Lennon's genius.
The humor is very dry witted and anyone of the best examples of John's sense of it. That is his sense of the humor thereof that which he possessed within & out of itself made man. Just read it -
Peace,
James Murrell
http://www.jamesmurrellgtr.com

In its first few pages this book grabbed me by the chest and tickled -quite ruthlessly- at my heart. (Although this only prepared me for a tumultuous read that- sadly- was not in store.) The initial autobiographical foreword is honest and sad and my favourite part of the whole collection of writings; not least, because it's basically the only section that doesn't require an intense mustering of interpretation.

Despite my two-star rating, this is definitely a a worthwhile read. John Lennon's drawings make up a significant proportion of this collection and, for the most part, are very witty and amusing; both words that could also be used to describe his meandering prose. John Lennon's writing is exceptionally witty. His use of word-play, though relentless, is charming and again, very witty and speaks heavily of Lennon's -occasionally dark- sense of humour.

However, I don't believe even the most exceptional of wit can make up entirely for his writing which feels lacking in almost every other way. Albeit, this was most likely always his intention. Some parts were not made to make sense and at times his style was quite literally the same as when you follow the words on your phone's predictive text to see what it comes out with. He found the charm of predictive text before predictive text.

I gave it a two but it could have just as easily been a five.

I got this book for free; thank God.

It's broken up into about 3 sections. The most interesting section is the first, "The Ballad of John and Yoko." As I've not read any Beatles, Lennon or Ono books on Beatles-related topics, it was slightly interesting to read some of this coming from John's mouth.

A few times it was disheartening as he didn't use quotation marks when calling Ono an "Oriental" or a "nigger." It would have made it more clear as to which way he was using these derogatory labels.

I also think a lot of this was a front and he was trying to convince readers that it was only his way while others might have viewed these experiences differently. Especially when the person writing them was drinking or on drugs.

The most obnoxious part of this book was the "Skywriting" part which made Monty Python seem high-brow. It wasn't humorous or smart or witty. It was simply dumb and stupid and boring.

I've always thought I'd admired John Lennon because he's a good song writer and from all appearances fought for what was right and liked Peace and all that. But after reading this book, I realize he's no better than you or me. He just wrote some decent songs and sang them well. He should have stuck to that.

John Lennon was a brilliant songwriter and activist, and a decent cartoonist, but his prose is an acquired taste at best.

The short section titled The Ballad of John and Yoko is as close as John ever got to an autobiography and is worth the purchase price alone.

The main section is a ‘novel’ in name only. Put simply, it’s nonsense – top shelf nonsense for sure, with plenty of giggles along the way, but nonsense nonetheless. Think Spike Milligan on a particularly weird day and you’re about half way there.

Fine if you’re into that kind of thing but bound to be disappointing to anyone expecting the written equivalent of Imagine – or even Some Time in New York City.

I have a positive prejudice for the author, since I am a big Beatles fan. It is Lennon at his usual genius. Any true fan of John's will get a kick out of this book. It is a group of short Lennonesque stories along with some of his art work. Witty, unexpected and mischievous. A great book, I will revisit it again in the future.