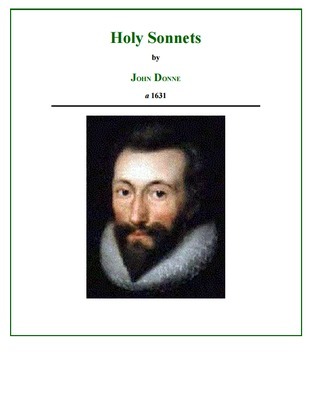 The second in my series (3) of reviews of John Donne as read in The Complete Poetry and Selected Prose of John Donne.

This collection of his Holy Sonnets (often called the "Westmoreland sequence") contains 19 sonnets written by Donne from his conversion to Anglicanism up until his death. These are metaphysical poems that deal with divine love, death, penance, his own grievances, and obviously mystical devotion to the trinity.

I have to say that while I was not shown anything new in regards to themes with Donne I was still impressed by how could his style is. His sonnet style was influenced primarily by the Italian poet Petrarch and of course Shakespeare. My personal favorite admittedly is the one that most people will recognize, his sonnet that deals with the one theme that comes up in much of his work-death. Sonnet "Death Be Not Proud":

"Death, be not proud, though some have called thee
Mighty and dreadful, for thou art not so;
For those, whom thou think'st thou dost overthrow,
Die not, poor Death, nor yet canst thou kill me.
From rest and sleep, which but thy picture[s] be,
Much pleasure, then from thee much more must flow,
And soonest our best men with thee do go,
Rest of their bones, and soul's delivery.
Thou'rt slave to Fate, chance, kings, and desperate men,
And dost with poison, war, and sickness dwell,
And poppy, or charms can make us sleep as well,
And better than thy stroke; why swell'st thou then?
One short sleep past, we wake eternally,
And Death shall be no more, Death, thou shalt die."

My next review on Donne will be The Complete Poetry and Selected Prose of John Donne itself.

These are amazing, life-changing poems--not only the most famous ones such as the one beginning "Death be not proud", or "Batter my heart, three-person'd God" but also the less well-known ones, like the one beginning, "At the round earth's imagined corners, blow"

These are beautiful, and I will definitely listen to them again. I do think poetry should be listened to, rather than read silently. It seems to convey more that way.

What did I think of this book?Ah.....What was the question?

Poetry is a tricky thing for me. One cannot rush through poetry, there is a quieting of the heart that must take place to receive it, and for me that quiet place is connected with the LORD Jesus, and the Bible as His word.

But John Donne, while not an inspired writer of Scripture, captures the struggles and mysteries of the Christian life in a compelling manner. When I can savor these Sonnets, they are a blessing and refreshment. I'm glad I set aside time to read just one per sitting and think about it. It took me a few weeks to get them all in, but the discipline was well worth it. If you don't want/ have/ cannot find/ the book, you can read them (and a lot of Donne's other works) online here:
http://www.luminarium.org/sevenlit/do...

I reread this for my Berkeley TA-ship with a Donne scholar. He made a lovely point about reading poetry as the rigorous discipline of attention and connected this focusing of attention with a Donne sermon about unifying the soul. Also, he looked at Donne's relationship to Petrarch, whose sonnets were the first poetry we covered this term, bringing the course full circle on the last official day of class. I might say rereading sonnet sequences this term helped me foster mindfulness and connection with Donne's cruel Petrarchan mistress of a God.

I originally read this for my undergrad independent study on sonnets.

Listened to these sonnets on a nice evening walk. I feel like poetry doesn't make a lot of sense sometimes without context so it's tough to give this a good review. Perhaps I will read these again sometime when I am feeling more contemplative. Or not.

Donne's thought-provoking "Holy Sonnets" are some of my favorite poetry. They can be confusing to read at times; but when the meaning of a sonnet suddenly "clicks," its brilliance and beauty become wonderfully apparent.

This is my best bedside book!
Actually, I don't have a copy... YET. But I will very soon!

John Donne is, under my mere point of view, the BEST English writer (at least, the best of those I have already read).

If you really want to enjoy, read this poem: "Death, be not proud"