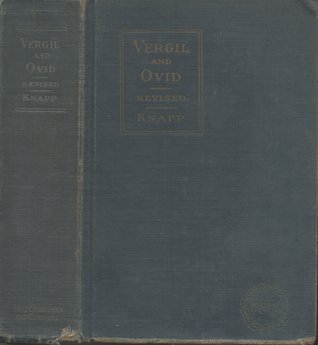 I read this in Latin. I am a nerd.

yes, in latin. yes, i am that hardcore.

Come on - a huge horse parked outside your battlements and you're not in the least suspicious? This is supposed to be the cradle of Western civilization?

I read the English translation and then I translated this one. It was hard. This is only the first six books and it took so much longer than the translated 12 books I read. But it was so worth it; the poetry was incomparable between the English and the Latin.

I used this text as an undergraduate in an intermediate Latin class 35 years ago. I fondly recall how reading the Aeneid in Latin for the first time was a completely transformative experience. Before my encounter with Vergil, I had no idea that literature could possibly be so incredibly beautiful and moving. His diction, rhythm, narrative genius and virtuoso command of the language struck me like a bolt of lightning. Suddenly, I emerged from an abyss of darkness and entered a new world illuminated by the dazzling brilliance of Vergil's immortal poetry.

Even more satisfying to me now is to witness my own students responding to Vergil in the same way, decades after my own first reading of the poem. I see in them the same wonder and admiration for his extraordinary artistry, their delight in discovering the remarkable poetic techniques that lie at the heart of his inimitable style.

To read Vergil in Latin is one of the most serious undertakings a young student can hope to achieve. It is a literary training of the first rank. Unlike in English classes, where students blow through several "great works" in the course of a year, in an upper level Latin class students will read Vergil, and only Vergil, over the entire year. And this means close reading: parsing each word in each line, admiring complex sentence structures, unusual word choices, richly figurative and rhetorical language. Through his unforgettable characters and their actions, Vergil never fails to provoke in his readers a means of contemplating the deepest mysteries of human existence. Honor, duty, sacrifice, the ties that bind human beings within their families and a larger political community -- all this and so much more is what Vergil has to offer. He is, in short, a serious writer for serious readers.

How many students, perhaps many years later, have recalled the famous bee simile as Aeneas gazes down upon Carthage when he sees it with Achates for the first time? Or summoned up a recollection of Laocoon and his two sons devoured by the fearsome snakes coiling over the sea and heading straight to them with deadly ferocity? Or called to mind the shocking violence of Pyrrhus (Neoptolemus) as he smashes his way into the innermost sanctuary of Priam's palace to slaughter Polites before his father's eyes, a moment before butchering Priam himself as he cowers helplessly at an altar with Hecuba and their daughters and daughters in law? Then there is Dido, the descent to Avernus, the encampment in Italy, and the inevitable death of Turnus.

Nowadays the word "epic" is used to describe just about anything that is big, or perhaps anything that is big and spans several generations. In its true sense, however, "epic" means much, much more. It is a word that describes a work of art that is universal, that narrates a story which fully embodies all of the most cherished values of an entire civilization. This is the Aeneid.

This was actually the copy I think I had in high school. One of the best classes I have ever taken, thanks to my Latin teacher, who was practically immortal and unfathomably wise. I wish I could still read Latin, because The Aeneid in Latin is like Anna Karenina---there's so much there, it would take more than a lifetime to get everything out of it that was possible to get. The part with Dido breaks my heart, especially about how "they fondled through the winter, forgetful of their kingdoms." I know you like fondling guys, we all do, but don't forget your kingdoms!! Something bad is going to happen!

I translated most of chapter 4-6 in Latin 300 at the University. I love this book so much. It inspired me to pursue Classics for a time and it continues to shape the way I look at the world.

Best way to read Virgil in Latin. Everything you need is in the book. You don't even need a dictionary.

If you're in Latin, you like this book. End of statement. No questions asked.

I read this book in Latin. And I must say Virgil is a writer I really like reading during Latin classes. It's written in a beautiful metrum, with lots of figures of speech and a wonderfull story. At the moment I am reading the odysee and it is fun to see that Virgil tot inspired by Homer.