Home › Authors › Colin McGinn › The Power of Movies: How Scree... 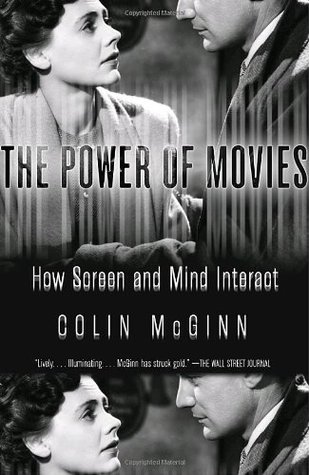 The Power of Movies: How Screen and Mind Interact

What kind of book can talk about "the power of movies", and never refer to a single scene in a single movie? Oh sure, McGinn mentions Citizen Kane in the second chapter, but says absolutely nothing about it: he uses the movie, and the fact that Orson Welles played the lead, not to tell us anything about the art or craft of making movies, but merely to ruminate on the relation of image to object. This is not helpful.

I suppose the subtitle of the book (How Screen and Mind Interact) ought to have been a clue. Still, you would expect (OK, I would expect) that to talk about "movies" would involve talking to some extent about actual, specific movies. What can you possibly hope to achieve by generalizations? When talking about "movies" are we meant to think that there is nothing different between the films of Peter Jackson and those of Carl Theodor Dreyer? That the mind "interacts" with all films in the same way? McGinn seems to suggest exactly that, as when he says that you don't look at the image but "through" it. That may be true for many films and for many viewers, but it is nowhere close to true for certain films (12 Monkeys, or Un Chien Andalou, or Daisies come to mind). And it is certain that film students, actors, and directors look at the images, to figure out how the director and cinematographer achieved the effects, the "power", that they achieved.

This was just a disappointing book. As I was reading it I felt that McGinn was being lazy, that he hadn't done proper research. But I think the problem is more fundamental: McGinn simply doesn't see this (the understanding of cinema) as an object of empirical research. For him it seems to be a matter of pure analysis, taking the most evident features of cinema as a jumping off point. What next? Will he write a book, The Power of Painting, and never refer to any specific painting or artist? What could anyone ever learn from such a book? And what can anyone learn from the book that he actually wrote? Nothing, I think, or very little.

Intriguing theory, but it seems to make claims that are both too bold (specific claims about the substance and production dreams that need further validation and seem to fly against some of the evidence) or too narrow (why wouldn’t a similar theory apply to reading a novel or watching a play?). He also seems to handwave much when answering potential criticisms.

Excellent! An important book that explores why it is that we like movies so much. I learned a lot about seeing, dreams, and even a little philosophy as I read this important little book. We all love movies, but how often do we stop to ask why? I think McGinn is clearly onto something in his analysis. It is one of the few books that I wish was bigger so that I could learn more. See comments on my blog as well: Sects and Violence in the Ancient World.

My favorite thing about the book was its promulgation of perspectives. What I mean is, the author creates a surface or network to provide all of his ideas and perceptions, and this I found very interesting because it provided me with new visions on how dreams and film could interact... + It allowed me to imagine new ways of viewing the topic, introducing to different visions on this specific topic (the views of the writer Colin McGinn).
I recommend this book if you are learning about cinematography and films because it could provide you with new ways of looking at movies and how they could evolve in time.
The lesson I find this book has to offer is that, movies are kind of like dreams in the way that they interfere with our senses and allow us to get inmersed within a story. The characters are not physically with us or in front of us, they are on screen, yet they resemble characteristics and emotions that stay with us until long after we have watched them.
I appreciate the content of this book in the way that I learnt a different person's view, yet I didn't like how , many times the book felt like mere opinions (in part because they are, it is all following a thesis, based out of thought) .
To finalize, "The Power of Movies" is a good book if you are interested in grasping all you can about films/movies, this is an insightful journey inside of Colin McGinn's perceptions about dreams and their comparison to films.

Maybe this would be the perfect book for someone else but it was not what I was looking for. I think it would have made a better essay than book, it's so repetitive as to be mind numbing. Every interesting thought gets dragged out to death. I am looking for something more introductory for thinking about movies, philosophical but not 50 pages of all the things that can be compared to movie screens.

A New York Times review of this work, which got its title wrong, called its first 60 pages “twaddle.” The reviewer is speaking of McGinn’s distinction between looking at and looking into. McGinn says we look into movies in the same way that we look into people’s faces to discover their souls. I like this distinction, but McGinn does not explore the idea of soul in any depth. In terms of film theory, he is much more in the camp of Arnheim than that of Kracauer. Like the surrealists of the twenties, McGinn says that film is at its best when it approaches the condition of dream, not when it most faithfully reproduces the exterior world

I read the first two chapters. McGinn's basic premise is that movies are so powerful because they are dream like. His whole premise hangs on the idea that movies, as we experience them in the theater, are the power. I think that movies are powerful because they are living stories, and they do a good job of telling stories, just like the old days of myths around the campfire. Also, movies are powerful whatever medium they are presented through, even 6 inch screens of portable DVD players.

I found the subject quite interesting, but the presentation was lacking. For a book about the power of movies McGinn seemed reluctant to use examples from film history. He also is quite adept at pounding a point home ad nauseum. Two hundred pages to point out that films are very similar to our dreams seems like overkill. He comes at his theory from every possible angle, but by the end I was wondering what the point was.

McGinn explores some interesting ideas about the way our minds connect with movies as though they were dreams. The book analyzes several implications of the theory, and provoked thought about the importance of both ways of thinking. Nothing earth-shattering, but still worth a read.