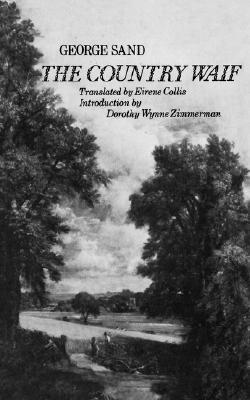 Set in the countryside of the author's native province of Berry, The Country Waif tells the story of François, an orphan boy placed in a rural foster home, and Madeline, the miller's wife who befriends him. Sand's contemporary, Turgenev, wrote that it was "in her best manner, simple, true, affecting." The book has been admired by writers as diverse as Willa Cather (she found it "supremely beautiful") and André Malraux, who considered it a masterpiece.

As well as examining the setting, language, and narrative mode of the novel, the introduction looks at Sand's life, in part from the feminist perspective, with attention to the sociopolitical background of the post-Napoleonic era, when Aurore Dudevant felt impelled to rebel against her status as a country wife and to become George Sand.

François le champi (A Country Waif) is not one of the most celebrated novels in French literature. It is not even the major work by George Sand, a fascinating woman but who does not rank at the very top of the French literary figures.

And yet, Le champi holds one of the keys to the greatest work in French literary modernism.

This book stands at the beginning and at the end of La recherche tu temps perdu. It is one of is multiple frames. In the opening of La recherche it appears as the first novel to which Proust’s young protagonist is exposed, and this conveys for him the feeling of mystery in literature. It then surfaces again at the closing of Proust’s work with a revelatory role. We can then see this minor novel as actually inaugurating the beginning of time being wasted away while also signaling the possibility that lost time can be regained when we are approaching its end.

Little did George Sand suspect, when she wrote this novel in 1848, that this work would play later on such a major literary role.

In her preface she explains how the end of the July monarchy and the 1848 revolution had interrupted the publication of her work. These interfering circumstances however were the appropriate context for her work. For her aims with this novel were social. She wanted to present how a boy, a waif, could be honorable. She wanted to break social stigmas. A good-for-nothing could be good-for-everything. Her aims were also aesthetic. She wanted to find beauty in the common, in the everyday, and for this she chooses what she thinks is the simple life, the country life. She draws then from the pastoral tradition to which she however has given a socio-political twist and has transformed it into an engaged “roman campagnard”.

In François le Champi, she constructed a story within a story. A couple of characters, who remain inexplicable in spite of explicating themselves, discuss aesthetics and its application to real life. At the core of this debate there is also a strong moral standpoint. One of these two characters proceeds then to illustrate his points with the tale of the Champi. This second story is the bulk of the novel.

I wonder how much of Proust’s interest in this novel was drawn to this fictitious dialogue. I suspect that not much, even if some sentences seem to denote an echo in his writing (entre la connaissance et la sensation, le rapport c’est le sentiment). My impression is that the attention of his young narrator is drawn directly to the tale of François le champi, a boy like himself.

In this second narrative, the plot is simple and the characters are simple. The story, however, has baffled me.

What leaves me in suspense is that I would like to know why Proust chose to include this particular novel in such a prominent place in his own work. Le Champi involves a surrogate mother and a young castaway and, easily to predict, love develops between the two. This plot becomes a very tempting premise. I have however preferred to push aside any Freudian lenses and looked through less pre-colored filters.

For one, the young Narrator did not read the book himself, it was read to him by the mother. She censored the sections that she thought were sensual and jumped over those passages. Consequently a certain level of incomprehension was created but immediately endowed with a veil of mystery by this sensitive and highly imaginative young boy.

And last there was the title. For the word Le champi is not a common word in French. Sand has one of her characters explain to the other that he is mistaken if he thinks it is a foreign word, for Montaigne had used it. The title was incomprehensible to Proust’s dreamy child as well (sa couverture rougeâtre et son titre incompréhensible donnaient pour moi une personalité distincte et un attrait mystérieux). And the fascination that a word can enclose (la source devait être dans ce nom inconnu et si doux de “Champi” qui mettait sur l’enfant qui le portait sans que je susse pourquoi, sa couleur vive, empourprée et charmante.) is what endows the name with such a strong evocative power than it can make memories be relived or older selves resuscitate and possess the current identity.


And so a copy of François le champi rests on the night table in Marcel’s room in Tante Léonie’s house in Illiers-Combray, an idilic countryside. It is a witness that Time was Recovered and that we, posterity, continue to keep his Time ticking. 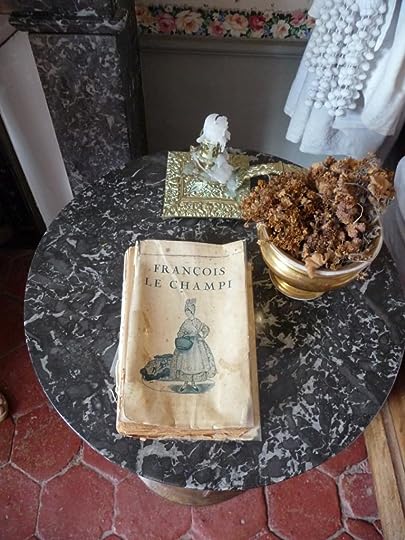 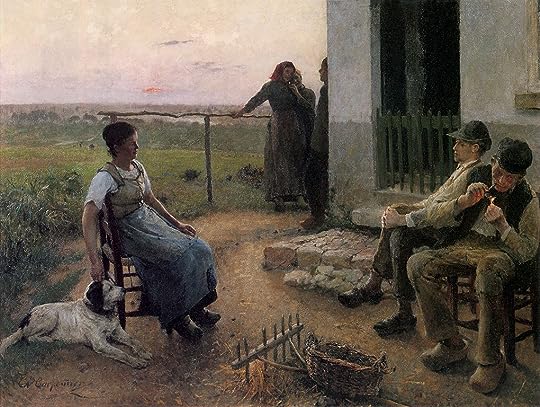 My feelings about this novel are quite mixed. At times, I found The Country Waif to be extremely moving and yet at other times, it felt a bit silly and melodramatic. The pacing and the tone of the novel seemed a bit problematic. There were some twists and turns that didn't make sense to me. However, The Country Waif is in many ways a fascinating read. I'm certainly glad I read it.

The Country Waif (original title Francois Le Champi) is one of the three pastoral novels written by George Sand and it bears many similarities with the other two. Together with her autobiographical writing, these pastoral novels are probably Sand's best known work. These pastoral novels are filled with emotions and youthful romanticism as well as a hint of socialism. There is always a love story at their core and female heroines are always very prim and proper. There is always a material difference between the love interests. All the protagonists in these novels are peasants but they happen to belong to different social (financial) class, hence the hint of socialism. You can read my reviews for the other two novels by following the links bellow:
https://www.goodreads.com/review/show...
https://www.goodreads.com/review/show...

Moving on with my review.

The Country Waif (François le Champi) is a strange mix of serious and romantic themes. Sand's pastoral novels often focus on marginalized individuals. This one features an orphaned protagonist in many ways similar to female characters in the two other pastoral novels written by George Sand. The difference here is that the impoverished individual is a boy, not a girl. This novel reads both like coming of age story and a romantic one.

The story is set in the countryside, as goodreads states it's : 'the countryside of the author's native province of Berry'. This novel tells the story of François, an orphan boy who is at the time the story starts raised by a poor spinster who takes care of him in exchange for a few coins from the orphanage. The old spinster lady isn't unkind, but she is not really able to take good care of Francois and hence the boy doesn't even know how to say how old he is.

The spinster is too poor and old to properly take care of the boy. While it is clear she partly took him in because of the coins she gets for his care, she also tries to take care of him to the best of her abilities. Soon into the story, Madeline, a young married women with a child of her own comes upon Francois in the open and realizes the boy has fever. She wraps the boy (Le Champi- an orphan) into her own shawl and thus a friendship is started. Madeline's husband and mother-in-law aren't happy about her desire to help the poor boy and the old lady taking care of him, but Madeline is willing to do everything to help the boy.

Madeline initially teases the boy because he doesn't say much and doesn't seem very intelligent but soon she realizes that he is very quick to help her. The boy isn't talkative but he is helpful and seems to always understand what needs to be done. It is a friendship that will change both of their lives. Madeline is a simple and virtuous women with a problematic husband and mother-in-law. Madeline founds comfort in Francois and he dreams of calling her his mother. That's the start of the story. The plot of this novel was a bit less predictable then her other pastoral novels, but I failed to get completely engrossed into the story and view the characters as real people. They seemed more like symbols to me. The ending surprised me and I'm still not sure how I feel about it.

François le Champi (1848) is the third in the trio of George Sand's popular "pastoral novels," and just as rewarding as La Mare au Diable and La Petite Fadette. Sand's Avant-Propos or Prologue is a beautifully written tribute to the beauties of nature (especially in rural central France) as God's work of art, and the peasants of the region who are the caretakers thereof. “ . . . le paysan le plus simple et le plus naïf est encore artiste, et moi, je prétends même que leur art est supérieur au nôtre.” The title character is a handsome, but abandoned and ragged, 10-year-old child with no last name, who is known only as François le Champi (champi: a child found in the fields). François is found one day by 20-year-old Madeleine, a wife of a local farmer, who has a small child. She finds the boy a new guardian, but continues to give him food and clothing in secret. Sand can't help but comment here on how Madeleine, a kind and decent person, is ill-used by her husband, and that marriage often turns sour for the nicest and prettiest of young women. As François matures, he remains innocent, but grows in strength, looks, and Christian faith. Eventually, other young women in the region will become attracted to François even though he has always loved Madeleine, and despite the difference in their ages, he is growing, and she is widowed, and . . . This is a lovely story--not only rewarding in plot, but rich in Sand's love for her native area of France and all its natural charm.