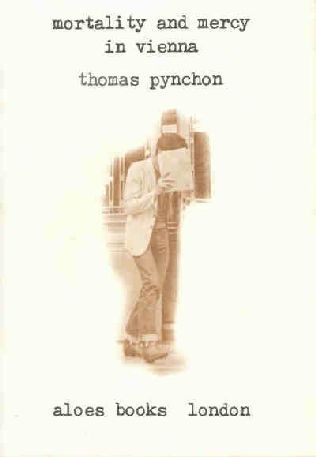 Mortality and Mercy in Vienna

I had previously read all of Pynchon's novels. This is now the last of the easily available chapbooks and that completes all of them. Always good in his own way.

The story of a late Fifties Washington D.C. party in which cultures clash.

Story Review: "Mortality and Mercy in Vienna" was Thomas Pynchon's second published work, appearing in Cornell University's formal literary journal, Epoch, in Spring of 1959. Written while still in college, for some reason he did not include the story in his short fiction collection, Slow Learner (1984). Which is a shame because it's easily as good as any piece in that company. The title comes from a line in an early speech in Shakespeare's Measure for Measure referring both to the powers of life and death and of mercy. Apt and lovely title for this story. Unlike so much of Pynchon's work "Mortality and Mercy in Vienna" is written in a straightforward, quick-reading style. A story that encompasses the carousel of an "absurd, surrealist" party consisting of a fetal pig, Chianti, Kurtz, Seconal, T.S. Eliot, Peter Arno, a Bartok Concerto, and a Klee original. The sort of party in which "you might give absolution or penance, but no practical advice." A party which you want to attend, but might not stay till the end. Apparently written quickly, it's all the better for that as it exists in its natural state before Pynchon had time to gild it with myriad additional layers of his encyclopedic and many-lives-lived knowledge. Available for sale or in PDF on-line, "Mortality and Mercy in Vienna" is well worth seeking out for anyone with an interest in Thomas Pynchon and an entertaining story. [5★]

Not sure if this was his first or second published story but I think this might be his best. Heart of Darkness, Flowers of Evil, The Wasteland, dopplegangers, Windigo psychosis - they are all in there.Faulknerian length sentences too.

There is all you've expected from P.

Absolute garbage. I like Pynchon but this is an incredibly short story that can be found for free online, already appeared in certain editions of Slow learner, and just isn't good. There's some mild amusement to be had with the story, but like Pynchon's other early stories, it's a deeply flawed prototype of things he later perfected in books like V. and Gravity's Rainbow.

Making people pay over 10 dollars for this story on its own is highway robbery.

Tiny masterpiece! There is all you've expected from P. - absurd situations, intertextuality, some Jewish, some French, some German, some Spain and Bartok and pig foetus, of course))