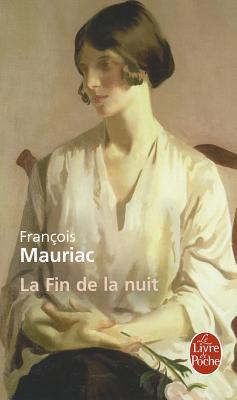 La Fin de La Nuit (The End of the Night in English) is the final part of Mauriac's series about a troubled woman named Therese Desqueyroux. I very much enjoyed the first novella, Therese Desqueyroux, and found the intervening stories rather interesting. This, however, was a little disappointing. Whilst I cannot fault Mauriac's writing, a lot of the plot details from Therese Desqueyroux were copied almost verbatim, and it failed to pull me in. I am a huge fan of French literature, but with regard to the old heavyweights, I feel that dear old Gide and Zola are far more my jam.

François Mauriac ended his 1927 novel Thérèse Desqueroux with his eponymous heroine, a frustrated, then later, disgraced wife and indifferent mother, running off through the streets of Paris, finally liberated by her stultifying husband, and leaving readers with high hopes for an independent and happy future. Mauriac loved Thérèse enough to continue her story through two short stories “Thérèse and the Doctor” and “Thérèse at the Hotel” (1933) and another novella The End of the Night (La Fin de la Nuit). In the first novel, young Thérèse married Bernard Desqueroux mostly out of convenience—their alliance joined two families’ valuable pine forests in Argelouse in the Bordeaux region. But the restless Thérèse was so unhappy that she eventually was desperate enough to try to poison her husband with ongoing doses of arsenic. Discovered, tried for her offense, then acquitted through her in-laws’ influence, she returned home a virtual prisoner of Bernard and his family. “She had not brought destruction on this family: Rather it was she who would be destroyed. They were right to look on her as a monster, but in her eyes they too were monstrous. They were planning slowly and surely to obliterate her, few though the signs might be their intention.” But even years after Thérèse was finally cast adrift on the streets of Paris, she is not able put her past and her guilt behind her. In “Thérèse and the Doctor,” 10 years have passed and our heroine has been through a few love affairs and also has a history of consultation with a Parisian psychiatrist. During a visit with the doctor, readers see the effects of Thérèse’s ongoing guilt. In “Thérèse at the Hotel,” she inadvertently attracts the attention of a young man, but feels unable to encourage his attention. She addresses and analyzes herself: “Rejected, as a result of my crime more wholly than anyone was ever rejected before, and with such a heart and such a body, why didn’t, as the phrase is, go to the dogs altogether? I know perfectly well why. You are intelligent, Thérèse.” In The End of the Night, (1935), 15 years have past since Thérèse, now age 45, left Argelouse. She has given up chain smoking since she was diagnosed with a failing heart, and she suffers debilitating chest pain. Thérèse reconnects with her estranged daughter, Marie, and also meets Marie’s boyfriend Georges, who, for a brief time, believes himself in love with the mother, not the daughter. The ensuing guilt drives Thérèse mad with fear and paranoia from her original crime, which she feels is still dogging her. The question is whether Marie can rise above her own sorrow and resentment to help her damaged mother. All of these stories are beautifully and sensitively written, and even in English translation, Mauriac’s fine writing style comes through—a testament to his years long devotion to a troubled, but special, character.

I started reading this book a few years ago for a French book group. It is very well written. The French was difficult enough to be a challenge, but not so hard that I had to use a dictionary constantly.

Honestly, I do not like the character of Thérèse. She bothers me and her thoughts in this book seem to run in circles. I realize that she is supposed to be a bit crazy and the author does a great job of expressing that, I just do not like reading about it. I have also read "Thérèse Desqueroux" that this book is the sequel to.

And they dare say that Russian literature is depressing... "End of the Night" finishes the story of Therese Desqueyrox, but it's not a happy ending: no faith or love found, not even hope. Life goes on and children are destined to repeat their parents' mistakes.