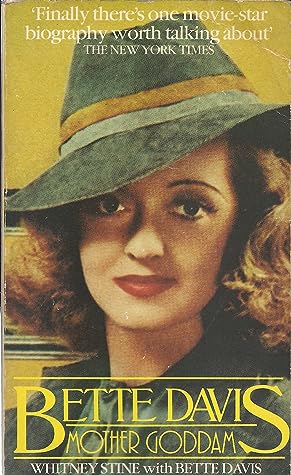 Bette Davis is fascinating to me, but this book written with her heavy editing offered me little. Talk about an unreliable narrator. I did get the gist of her life up to Baby Jane, but she came near to saintly and was a legend in her own mind as well as the rest of us. No objectivity, but did enjoy hearing about her films.

Not a biography, but rather a verbal scrapbook of Bette Davis’ career, with Davis providing the color commentary. Discrete industry gossip from Hollywood’s golden age. Worth picking up if you’re a vintage movie fan and come across it; worth seeking out if you are a Davis fan.

With Miss Davis adding in her own commentary and corrections where she felt it was warranted I loved and still love this book. This is definitely one to read and keep handy as a true reference guide

Reads like an extended publicity release. Marginally entertaining, but if you've read any other decent bio of Bette Davis, there is nothing new to learn here. Virtually nothing about her personal life, just a chronology of her movies, with her comments interspersed.

A chronology of the Davis career, with often hilarious running commentary by Davis herself, added after Stine completed the book.

Sadly this book is very boring. Even Bette's comments can't save it. It took me months to read it.

Whitney Stine's other book about Bette is much better.

Another precious find from a used book store! I love old Hollywood. In fact, my grandmother, born only five years after Bette Davis, always reminded me of Bette. Both women lived unabashedly, thumbing their noses at conventionality, and both women had those "Bette Davis Eyes." I grew up loving the movies, just as my mother had before me. So, finding this gem, recapping Bette's career from the twenties until the mid-seventies, was like dusting off old love letters found in an attic trunk. Because my mother was raised in L.A., she introduced me to the movies of her youth. And, they still hold the test of time.

The best thing about this book, which is pretty much your standard biography, are the comments interjected by the great Ms. Davis in order to clarify Whitney Stine's facts. For you young readers, it would be like reading the set notes from Downton Abbey with Maggie Smith interjecting her pithy responses as the Dowager Countess.

Bette Davis was definitely her own woman. From day one of her career in the late 1920's and early 30's, she had a say in how she was going to act. I especially admire how Bette fought in court for what was ethically right regarding deals and contracts. She even stood up to the movie moguls of the time when studios owned their stars and actors, threatening to quit if she and her fellow actors weren't treated fairly. Bette was one of the first actresses who purposefully made herself look bad in roles to retain their authenticity. She wasn't afraid to age out in her roles. Bette was a dedicated and consummate professional. And how refreshing that she took ownership of the roles that tanked in her career!

I found myself going crazy on Google, looking up all of her movies and co-stars. I even watched some of her movies on You Tube, thoroughly moved and entertained. If you want to learn about Bette's early and middle career, this is the book. However, if you want to know what happened to her before her death in the late 80's, you have to look that up on your own. (It saddened me to know that her daughter wrote a horrible book about her. From Bette's comments in this book, she truly loved her children. No matter what their relationship, Bette didn't deserve that.) Rest in peace, Bette. And thank you for thousands of celuloid hours of pure joy.

As for my review of the book- the gimmick that makes this book awesome, is that Bette herself chimes in with commentary as her biographer is writing. As a fan, one cannot read those lines without hearing Bette say them in her husky, cigarette-destroyed voice. I was a little disappointment in Miss Davis' commentary because she almost always takes the high road. For example after an excerpt of a critic bashing her movie and or performance, she will often say, "He was right, the script had issues from the start, but we did the best we could." This is absolutely brilliant on her part, because she stays a victim, and the reader gets mad at the critic and feels for Bette and the art she worked so hard to create. She only has a few lines in the Whatever Happened to Baby Jane chapter, and none of them really zing Joan.
I don't recommend this book if you want to learn more about Miss Davis' private life. If That is what you're after she did write 2 other autobiographies, has had several biographies written by her, and her daughter even tried to copy Christina Crawford and do a tell all. I do recommend this book if you want to read a chapter about each film Miss Davis made and hear insights about those films from the diva herself.

No dirt to speak of, and Stine focuses a lot on her costumes, hair and make-up, but it's a breezy read through Davis' career, surviving classic Hollywood, the crumbling of the star system (she was fighting her Warner Bros. contract in court in the mid-30s), and the rise of TV.

Describing Davis and Mary Astor rewriting their parts in The Great Lie on set:
"The two actresses, by showing understanding of females in general, infused their scenes with a kind of bitchery seldom encountered - but it was the bitchery of nuance."