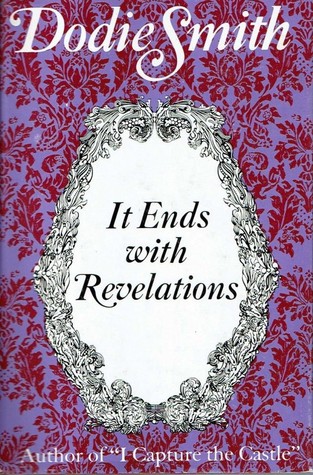 It Ends with Revelations

During a summer festival in an English spa town Miles Quentin, a distinguished actor, and his devoted wife Jill, become friendly with the local member of Parliament, Geoffrey Thornton, and his young daughters, Robin and Kit. All these attractive, intelligent and fully occupied people are seemingly untroubled. But the surface of their lives is deceptive.

All, even the lively During a summer festival in an English spa town Miles Quentin, a distinguished actor, and his devoted wife Jill, become friendly with the local member of Parliament, Geoffrey Thornton, and his young daughters, Robin and Kit. All these attractive, intelligent and fully occupied people are seemingly untroubled. But the surface of their lives is deceptive.

All, even the lively teenagers, have unusual problems which are only brought fully to light after the Quentins return to the London theatre world and the Thorntons to their Westminster house. Then the story becomes a far from conventional love story in which loyalty may prove more important than love; or it could be described as a story of different kinds of love. Few readers of its early sunny chapters will foresee its dramatic development, the outcome of which is uncertain until the very end.

The central premise of Dodie Smith's It Ends with Revelations isn't even mentioned until over halfway through the novel: its heroine, Jill, is knowingly married to a gay man. There's no scandal to it—no shocking discovery, nothing that the heroine didn't know before she entered into the arrangement. It's all very genteel, as are most of the relationships in Smith's works—as is the follow-up plot, in which an MP and his family conspire to un-marry Jill from her husband and take her over for their own.

Smith's doing some subtle and sympathetic writing on a delicate topic, here. The latter is perhaps not unexpected; Smith was great friends with Christopher Isherwood during the height of his writing career, after all. She manages to address what was still a shocking subject with great sensitivity and aplomb.

What's disappointing, somewhat, is that the novel's plotting might be too subtle for most readers to appreciate. Most of the fighting Jill's husband does to keep her takes place in the book's earliest pages, long before the average reader would have picked up on the book's central struggle. Also, among all of Smith's heroines, Jill is the most frustratingly passive. Even at the book's climax, she's allowing the men in her life to negotiate with each other for who gets her in his life; she never seems to make an actual choice of her own. She's less a person than a utility to be annexed.

Worse still, the book's shockingly old-fashioned. A casual reader picking up this tale of arranged marriages and homosexual blackmail for the first time might well assume it was written during the mid-century time period of I Capture the Castle. Yet It Ends with Revelations was published almost a solid two decades later, in 1968; to consider that it came out in the year famous for the Summer of Love betrays how very much out of touch Smith's writing was with current events. Mere months later, the Stonewall riots would make this quaint and genteel novel look like an archaeological relic.

Still, for its sweet insight into the workings of the English theater, the book's a pleasant enough read. And Dodie Smith's characteristic charm counts for a lot. Fans of I Capture the Castle and The Town in Bloom will enjoy another volume in the author's sweet re-creation of a lost and respectable age.

I bought this book only because she wrote 101 dalmations and i capture the castle,but what happened here? Nothing happened until halfway through the book , and then not much later. The characters were so unbelievable with two of the most obnoxious children in literature. Very contrived storybook ending .....bah

Creepiest, most horrible children in the whole of fiction.

Short version: Well intentioned, but ultimately a failure as a novel.

Dodie Smith published this novel in 1967. In it, an impoverished, emotionally battered young woman is rescued in her darkest hour by a saintly gay man who marries her. For awhile she finds contentment in the moderately wealthy life & very fond friendship the two share. But in her 30s, she meets a widower who immediately falls in love with her & whom she loves back. The action of the novel is how all these issues get resolved.

Smith worked in the theatre first as an actress & later as a successful playwright, & was friends with Christopher Isherwood. So she had an opportunity to know gay men in a more reality-grounded way than those who thought they knew no gay people, even if they had met some passing as straight. That she wanted to write a book that conveyed some of her better understanding to a bigoted world is respect-worthy. However, her prejudice-fighting instincts distorted her art.

Miles, the gay husband, is (yawn) noble, generous, empathetic, & a gifted actor and director. His 2-dimensional characterization isn't as distracting as you might predict because although he is the pivot around whom the action turns, he is actually a secondary character. Readers don't spend much time in the room with him -- we hear about him from others, principally his wife Jill. Jill is the protagonist, which is the reader's good luck, because she is the most developed character in the book -- she has faults, she has passion, & her character matures in the course of the tale.

Her suitor, Geoffrey, is far more implausible than Miles. My guess is that Smith wanted him to be Miles's equal in virtue, but also someone who inspires a woman's passion, & that's the circle she does not square. We are meant to think of him as a strong personality, successful as a barrister and politician. But once you see what he allows or even encourages his children do, it's hard to accept that characterization.

I note one other Goodreads reviewer called the "children" (really older teens/young adults) the "creepiest, most horrible...in the whole of fiction." I see her point. The problem, though, isn't with the kids, who merely fill a vacuum created by their father's behavior. What kind of man holds a family council with his adult (or nearly so) children to determine how they en masse can persuade an already married woman to leave her husband? Who delegates his courting to his daughters? At one point, Miles is accused of pedophilia by someone who wants to blackmail him. Jill seeks Geoffrey's advice partially because she trusts him but mostly because he's a barrister -- she's asking for legal advice. She assumes as she consults him that he will keep the matter confidential, & then she explictly states that she expects confidentiality. Instead, he replies that he of course will tell his kids; naturally she must see that he should tell his children.

This was the point that I wholly lost my already diminished ability to immerse myself in the story. In some other parts of the book, when the characters were expounding their theories of homosexuality, I started a kind of running dialog with myself along the lines of "Remember, it's 1967, attitudes were different then, you liked The Well of Loneliness well enough. Read on." But I cannot imagine an era in which a compelling, plausible romantic lead would have so little sense of appropriate boundaries between parents and progeny, nor one in which such a character would be so self-righteously dismissive of the legitimate demands of professional ethics. & what kind of mature male assumes the best way to keep a secret is to blab it to 2 teenagers? Had anyone but Smith written the book, I would have chucked it then.

& while it's clear what the actions/characters of the kids do to distort the story, it's much harder to see what they add. Geoffrey could have pursued Jill without any help from his daughters. The central conflict between Jill's sense of loyalty to Miles and her desire for Geoffrey (who, like Anne Boylen, disdains the role of lover & holds out for marriage) is resolved by the actions of one of the kids, and the blackmail issue is resolved by another. But both those resolutions have a kind of deus ex machina feel -- the plot would have worked better if the adults had done the work.

I continue to respect Smith as a writer. Even a fantasy like The Hundred and One Dalmatians was deftly written enough to allow me to enter into the world of the story & not leave until it ended. No one can always be successful, & I fear she was not in this particular story. I recommend her other works far more heartily.

Like Casablanca and Now Voyager,, this book is about a woman who is torn between following her heart and being loyal. Dodie Smith always has an interesting take on love. She's sort of like a Charlotte Bronte in reverse. While tipping her hat to the idea of self-sacrifice, Smith generally comes down on the side of personal happiness. She somehow manages to do this without making the reader feel contempt for her characters. At least, I don't...I always sympathize with Dodie's heroines, and think I would regardless of their final choices, because the characters are so thoughtful, complex, and well-rounded.

This book offers plenty of food for thought, and I often return to it when faced with moral dilemmas.

the more I thought about his book the more I realized it is like a Shirley Jackson story, not a romantic novel. the family that seems to be saving her is really steamrolling her into their lives to give them what they never had, a normal family. they also have the added bonus of getting to save her as they couldn't have their wife and mother. they arrange everything before she has a chance to know what she really wants and she seems to be powerless to refuse them anything. it was an interesting but slightly creepy story.

This is an odd book, and I guess some of my issues with it can be explained because it was published in 1967. I can't really say what my problem was without spoiling a plot point in the book, but I'll just say I disagree with the descriptions of some people as "normal" and therefore implying that others are not normal. In the first half of the book nothing really happens and then bam -- weird thing happens. I also found the daughters in the book to be creepy. I've never read this author before but I'd heard good things about I Capture the Castle, so I probably should have read that one instead.

Very strange book. Her writing is beautiful, but I think Dodie Smith must have had an odd sex life as she has a really weird take on sexual matters that isn't explained away just by the fact her books were written decades ago.

I liked the book in a way, but I found the daughters and their father creepy and boundary-less! I kept wanting the main character to tell them to back the hell off!

I found Miles to be nicely written and the treatment of homosexuality in this book was probably somewhat progressive for its time, but strikes an odd note today.

what a weird book!

This is quite a startling book. I realise that 45 years ago things were very dfferent, but for two teenage girls to SPOILEReffectively abduct someone from their sexless but nevertheless happy marriage?! good grief