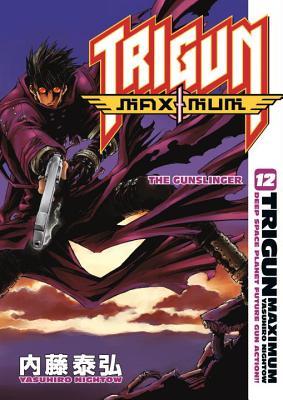 The best thing about this book is probably Legato's backstory which was really brief and came at the end. The usual problem of it being difficult to tell what is really going on is still present, especially in the Livio/Elendra fights. At least the AI Plants with the Earth forces actually talk about what they are trying to do with Knives.

https://bookwayfarer.wordpress.com/20...
Vash’s thinking back through the yrs and people he’s met and fought or is beaten down by, recognizing he’s heading towards the end by meeting up with Knives finally. Chronica and Domina are chatting of how cointegration is going as the military launch their missile, and Knvs surprises them by warping. Knives avoids the missile, but now it’s passed, they consider where he could be thinking of retaliating. Chronica shares with the scientist how only Knvs is the only creature to be able to warp his size at will.

An explosion occurs, the town seeing it, and is in an understandable panic as the military hurriedly states of not knowing what the explosion is, or whether it’s connected to the ark. Domina meanwhile, notices the humans aiming their weapons at them also stating of being in an “uproar”, screaming unintelligibly, Chronica then realizing whomever she is speaking with isn’t Domina, she sensing Knives seemingly, using “tentacles” to reach out into the stratosphere. Meanwhile, the Abureibus II ship’s defenses turn off, and Vash takes a shot with his sharpshootin’ skills. Back with Mer and Mil, they hear and see a flash of something quick, as Vash is ready to fight Knives on normal power, since his hair is quite black now.

Knives can’t understand how Vash could ignore reality so easily, he having absorbed thousands of plants and about to see another “relative” perish. Vash states he’s ready for whatever Knives throws at him, Knives being a simple one track mind about chasing “weaklings” around. When Knives shows off his power, he realizes Vash’d changed his power into bullets. About 80 yrs previously, Vash and Knives are still together, and then the tragic day happens, Vash and Knives arguing over men, women, and kids deaths as Vash’s chained to a rock and points a gun at Knives.

Knives is bored by their opinion’s differing and allows for Vash to stay there til he’s calmer. As Knives walks away announcing he planned to continue annihilating people, Vash shoots him, and Knives punishes his shit aim by using his power to slice his shooting arm off. Vash confides this time he’d be finishing the job after Knives claims to take more than his arm in this fight. When Knives realizes still Vash is siding with the flip-flopping humans, he shows his disgust, Vash not denying, but this not meaning Knives’d decide the fate of the world because of them.

Vash clarifies their 1st argument when Knives wiped out the town which’d killed travelers, Vash stating he hadn’t known the circumstances behind it, this town having to eventually have people leave for the radioactive contaminants there. 1 girl made to leave without explanation, she sobbing, alone and walking in the desert til telling her story to Vash. So, eventually Vash locates the source of radioactivity stemming from the town not cultivating the plants which’re now growing wild, Knives not seeing the point Vash is trying to make. Vash explains he couldn’t forgive Knives the ignorance he repeatedly shows by refusing to be compassionate.

The military fires more missiles which proves Knives’ point of human’s always destroying the good work 1 starts. Meanwhile, the scientist has Chronica stop “personal salvage” in preference to collecting info on their enemy.

EEEEEEEK!! That's really all I can say about this volume!

The beginning was a bit boring, but it began to pick up. More and more things keep happening that lead me to believe Vash may not be standing when the series ends! *sniff sniff* It makes me sad

And Legato's little past blurb at the end of this volume also made me sad....

It always kind of hard to tell what's going on.