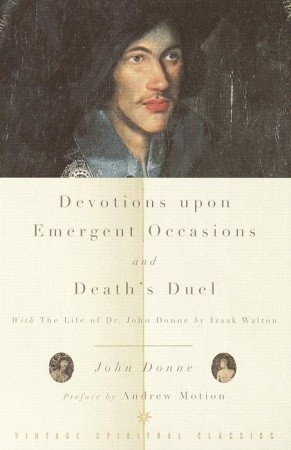 Devotions Upon Emergent Occasions and Death's Duel: With the Life of Dr. John Donne by Izaak Walton

John Donne (1572-1631) is best known as the greatest English metaphysical poet. But there was another dimension to Donne's life and writing that, if less well known, is no less profound and beautiful.

Born into an aristocratic Catholic family, Donne joined the Church of England at the age of twenty-one out of fear of persecution. At the age of forty-three, he gave up his p John Donne (1572-1631) is best known as the greatest English metaphysical poet. But there was another dimension to Donne's life and writing that, if less well known, is no less profound and beautiful.

Born into an aristocratic Catholic family, Donne joined the Church of England at the age of twenty-one out of fear of persecution. At the age of forty-three, he gave up his preoccupations with secular prestige and devoted himself utterly to religion. It was eight years later when, battered with fever, the deaths of his beloved wife, several of his children, and many dear lifelong friends, he composed Devotions upon Emergent Occasions. There is both trauma and great drama in this extended meditation on the meaning of mortality, the possibility of salvation, and the true nature of the passage of eternal life. With a new introduction by poet and biographer Andrew Motion, one of the most revered books of Christian devotion speaks to us again of the higher aspirations of man and the always-present possibility of a relationship with God.

This long out of print edition also contains Donne's last sermon, "Death's Duel" as well as the short colorful biography of him written by his contemporary Izaak Walton.

John Donne, Anne Donne, Un-donne - This is one of the most famous comments on marriage, from the husband of the pair himself. Donne wasn't referring to his wife, but instead, referring to the cost of the marriage, for he and Anne married without permission, resultling in a brief imprisonment and povetry. John Donne's marriage was such a scandel that his first real biographer, Izaak Waltonsaw it as a huge error and glossed over both it and Donne's love poetry as if in shame. Even today, when Donne's love poetry is more accepted, most people still know Donne for his Holy Sonnets. His love poetry, beautiful and powerful, gets treated totally seperately with the suggestion, unspoken, in some classes that it was written by a different person or, worse, critics try to shoehorn it into devotional poetry. To disregard, downplay, or slight Donne's marriage does a disservice to both the couple and the whole opus of Donne's work. Donne's marriage cost both him and his wife much. Much is made of his frustrated ambitions that occured in the years following his marriage, but she to must have suffered, constantly in childbirth, including one horrific still birth that occured when her husband was a way. Yet Donne wrote love poetry to his wife, including some, like "The Cannonization" that must have been written after his marriage.

It is important to know this about Donne when reading his holy work such as his sonnets or his book. The reason why this holy work stands the test of time, how it has contributed so many quotes to the world is because Donne is the most human of holy writers. One reads Saint Augustine and is seperated but a vast difference in time and culture. One reads Donne and that difference seems so slight for in many ways Donne was ahead of his time. For instance, he says in Devotions

If man had been left alone in this world at first, shall I think that he would not have fallen? If there had been no woman, would not man have served to have been his own tempter?"

There is no hubris in Donne, just questing that tells the reader that even holy man suffer the same up and downs, the same feelings and fears as everyone.

One should not pick up a book like this, slight though it be, lightly. When the premier theologian and thinker of his day sets out to contemplate his own death, the result won't be--can't be light reading. While he lived four hundred years before our time, we cannot expect to trip lightly through his thoughts--smelling the roses as we pass.

It was heavy going. It took persistence. In fact, it took a dogged determination to return to Donne again and again, but I've finally read the whole.

I do not recommend this book for the pleasure of reading, or even for the philosophical insight, but for the opportunity to look into the soul of another--opened honestly for his own examination during his final illness--to see reflected there the state of our own soul.

My own fascination with John Donne reminds me of the attempts by others to reassure their friends and family regarding death. Socrates did so in the Phaedo by describing his life as one long attempt to prepare for death. His view was echoed and enhanced by Montaigne who, In his essay titled “That to Study Philosophy is to Learn to Die,” turns to mortality and points to the understanding of death as a prerequisite for the understanding of life, for the very art of living.
"[L]et us learn bravely to stand our ground, and fight him. And to begin to deprive him of the greatest advantage he has over us, let us take a way quite contrary to the common course. Let us disarm him of his novelty and strangeness, let us converse and be familiar with him, and have nothing so frequent in our thoughts as death. "(Montaigne, Essays)
But one more example from my reading can be found in Rainier Maria Rilke's beautiful novel, The Notebooks of Malte Laurids Brigge. Through Rilke's fascination with faces and appearances the importance of constructing an authentic life is emphasized. This becomes a prerequisite for the prospect of a unique personal death. Death itself is a character in the novel, a "terrible rival", which may seem stronger than the living in its tolling.

The tolling of the bell in Rilke's novel signalling death brings us back to Donne who penned these famous lines:

"No man is an island, entire of itself; every man is a piece of the continent, a part of the main. If a clod be washed away by the sea, Europe is the less, as well as if a promontory were, as well as if a manor of thy friend's or of thine own were: any man's death diminishes me, because I am involved in mankind, and therefore never send to know for whom the bell tolls; it tolls for thee." (Devotions upon Emergent Occasions, 17)

VARIABLE, and therfore miserable condition of Man; this minute I was well, and am ill, this minute. I am surpriz’d with a sodaine change, and alteration to worse, and can impute it to no cause, nor call it by any name. We study Health, and we deliberate upon our meats, and drink, and ayre, and exercises, and we hew, and wee polish every stone, that goes to that building; and so our Health is a long and regular work; But in a minute a Canon batters all, overthrowes all, demolishes all; a Sicknes unprevented for all our diligence, unsuspected for all our curiositie; nay, undeserved, if we consider only disorder, summons us, seizes us, possesses us, destroyes us in an instant.

John Donne was a late-16th, early-17th century English poet and preacher. At one point, he became quite ill, and most of those around him though he would die. He eventually recovered. This book is a series of devotions written during that illness. Each devotion consists of three parts: a meditation, in which he reflects on the stage of the disease, and draws application from it; an expostulation, in which he remonstrates with himself to learn the lessons of the disease; a prayer, drawn from the meditation and expostulation. This is the work from which "for whom the bell tolls" and "no man is an island" come. This edition includes the final sermon preached by Donne, titled "Death's Duel," which really works well as a funeral sermon. The book is prefaced by a biographical sketch by Izaak Walton. This would not be easy reading, but it is full of profound theology, beautifully expressed.

One of the most poetic works of prose I've ever read.

"No man is an Island, entire of itself; every man is a piece of the Continent, a part of the main; if a clod be washed away by the sea, Europe is the less, as well as if a promontory were, as well as if a manor of thy friends or of thine own were; any man's death diminishes me, because I am involved in Mankind; And therefore never send to know for whom the bell tolls; It tolls for thee."

My favourite Donne book--even more so than his "Holy Sonnets" and other poems. Sometime in the early 1620's (1623??), Donne (Dean of St Paul's Cathedral and excellent sermon-writer/poet/clergyman) fell victim to a "relapsing fever" (typhoid??) that almost killed him. Here in 23 sections (each section divided into three parts: meditation, expostulation and prayer), Donne provides a kind of meditative journal about the course of his illness to near-death and then slowly back to wellness. Many of Donne's most famous lines are to be found in this book ("Never send for whom the bell tolls...it tolls for thee," "No man is an island...," etc.). This edition includes Walton's biography of Donne and Donne's last sermon--what would be his own funeral sermon, "Death's Duel." Amazing book.

Read this when you are sick, even just the non-lethal 21-st century winter cold kind of sick. I'm pretty sure fevers only amplify it. It's also one you can dip into and out of without losing anything, no particular reason to read straight through in order, and feels - no surprise - like poetry in places. A remarkable book.

the fact that i can't give "devotions" more than five stars makes me want to go back through my ratings and lower all my favorites to four.