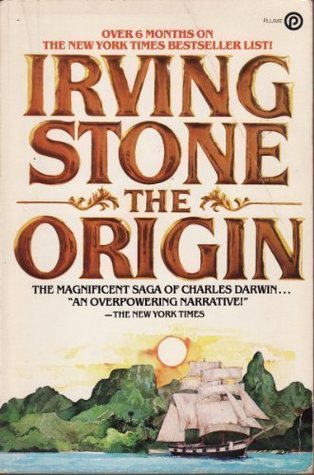 I can't remember how old I was when I first read this--- sixteen? seventeen? The paperback copy I had was a battered old used thing even then. And no one ever accused Stone of being a great writer. But "The Origin" is still a favourite. I knew a little about Darwin when I first read this, knew that he'd made the "Beagle" voyage. But "The Origin" gave me Darwin the young man, gave me those five years aboard HMS "Beagle", gave me the middle-aged naturalist moving one slow, painful step at a time towards publication of "The Origin of Species"--- and that sent me on to a host of other accounts and biographies (and to Darwin's own wonderful account of his voyage).

It's a slow book, and didactic. But it's a wonderful introduction to Darwin himself and to the world on natural history there at the dawn of modern biology. Look for a copy. It's worth it.

This is one of the most unforgettable books I have ever read. Ever. Irving Stone wrote about the life of Charles Darwin, introducing the reader, to not just the scientist behind the evolutionary theory, but the genius of a man during a time of controversy and conflict.

I enjoyed reading this book. It gave me insight into the man who wrote "On the Origin of Species" and provided the world with a scientific explanation for the evolution of species of plants, animals and man. I did not know that he wrote 24 other scientific books, on a wide variety of subjects, including: worms, barnacles , insectivorous plants, and the fertilization of orchids by insects. Despite accusations by religious fanatics, he did not mean to cast aspersions upon belief in god, but to report on what he observed in a precise, scientific manner.
There is a great deal of detail on his family life. He was a devoted family man. If you want to know more about the human side of one of the world's greatest scientists, this is an excellent book, although rather long, 743p.
Even though we are now in the 21st century, over 150 years since his Origin of Species book was published, there are still religious fanatics who want evolution to be classified as a theory and taught alongside "intelligent design" or "creationism".

A life story of Charles Darwin, another biographical novel by the fellow who essentially invented the genre. The book is marred by the fact that the only truly exciting thing Darwin ever did was the famous Beagle voyage. That took place over five or so years when he was very young, in his twenties. After a few intro chapters, almost half of THE ORIGIN is devoted to his Beagle voyage around the world, his stops, his collecting, etc., on that voyage. This is by far the best part of the this book.

The remaining thirty-some years of Darwin's life are dealt with in the second half of the book, which is not as good (though it is not bad). It is just largely descriptions of his researches, his publications, his friendships -- and his friends who turn against him when The Origin of Species is published, then all of the fights, and the accolades, interspersed with scenes about his family life. It's good, it just feels like a bit of a hodgepodge, and like Stone is throwing in tons of facts just to get them in, without as much regard to telling a story; this is particularly true of the final 100 pages or so.

But the great thing about Stone is that you get to live through the entire life of one of these famous people -- the books are impeccably researched; and you get to learn all kinds of interesting things. For example, who knew (rhetorical question) that the majority of Darwin's lifetime output was actually composed of long generalist-naturalist explorations of such non-controversial topics as earthworms, orchids, insect-eating plants, etc., or that he got his start writing about geology, not biological processes at all??? Not me! Who knew that he was independently wealthy because of a wealthy father, and because he was married to an heiress to the Wedgewood china fortune, and so never had to do anything but research, not even teach??? Not me! Also, with the Darwin book, it is interesting to read how we are still having the same debates, with the same rancor, over these ideas that are now over 150 years old.

I've actually read this book four times. It provides insight into not only Darwin, but also into the scientific thinking of the late 1800s. High school Biology teachers should recommend this book to their advanced students.

This was a very big book. Difficult to read like all other books by Irving Stone. It is my third book by him. Here we are looking at the life of Charles Darwin. It is interesting when we get an opportunity to study the lives of great historical personalities whom we only know from their achievevements. I especially loved Dr. Darwin, the father to Charles.

Irving stone has recreated the events that led to the publishing of the evolution theory in very vivid terms. It is not what I would have imagined. Charles was a very passionate and dedicated man. He was committed both to his family and to his work. He had a large family with his beloved wife Emma Darwin. Most importantly, he contributed so much to the scientific community. He reminds me of people like Dworking and Galileo. Science would not be the same without him. A very interesting book indeed.

Irving Stone was a popular biographer in an earlier age when info on famous historical figures was less available. His feats of research balance out what now seems to be overblown prose. Because I was going to the Galapagos Islands, I read THE ORIGIN as a way to better understand Charles Darwin and how these islands influenced his life. I had to force myself to slog through the first 90 pages, since his wordy descriptions of even minor characters bogged down my thinking. Eventually, though, I let myself submerge into the author's style and read for enjoyment and instruction.

Stone brings alive the young Darwin, who just in his early twenties took a voyage for which he was not prepared academically or physically, and certainly could not be considered an asset to the crew of a large ship. Stone shows Darwin's insecurities, the way he manifested emotional stress in his physical body, how his mind absorbed not only what he saw in the natural world on that voyage, but the greater implications.

How amazing that less than two weeks in the Galapagos provided the light bulb that, combined with all the other research Darwin did on the 5-year scientific voyage on he Beagle, led to his theory of evolution. And also amazing, he continued to do research in a wide variety of scientific areas despite societal pressure against it, family issues and sometimes fragile health.

There may be newer, less wordy books on Darwin, but this is a good background on the scientist (assuming all those bibiliographic sources were accurately used by the author, and given his reputation, I assume they were).

Not a beautifully written novel (at all), but very well-researched and oddly compelling. It helped fill in the gaps in my research on Darwin, and brought him to life in a way that the straight biographies I read couldn't. Recommended, and maybe even indispensable, if you have an interest in Darwin.

Another remarkable book from Stone!

I am bereft. My companion of 732 pages has now left me. The story has ended. I felt so drawn in to Charles Darwin's world, getting to know his life, his family, his friends, where he lived, his home environment, Emma his wife, his children, a sense of England, all his scientific endeavours, his driving passions, his correspondence, carving out his own unique life, the reviews, the geology, barnacles, orchids, worms, the wonderful holidays, the ailments, the 'cures', the travel by train and carriage, a sense of London, the Wedgewoods - and of course the years at sea on the Beagle and his South American adventures plus in the Pacific, and also discovering something of Fitzroy, who was to have the later post in NZ. What an amazing feat to draw so much detail! into one book. A true life and times. So enjoyed reading this book!