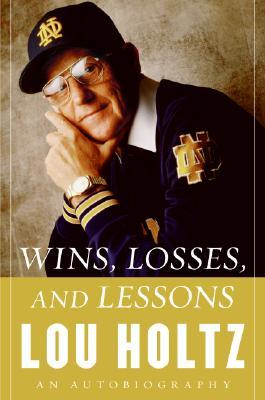 Wins, Losses, and Lessons: An Autobiography

Legendary football coach and motivational speaker Lou Holtz writes his inspirational autobiography, from his years in the military to making Notre Dame a national champion and turning South Carolina into a winning program.


Few people in the history of college sports have been more influential or had a bigger impact than Lou Holtz. Winner of the three national Coach of the Y Legendary football coach and motivational speaker Lou Holtz writes his inspirational autobiography, from his years in the military to making Notre Dame a national champion and turning South Carolina into a winning program.


Few people in the history of college sports have been more influential or had a bigger impact than Lou Holtz. Winner of the three national Coach of the Year honors, the only coach ever to lead six different schools to season-ending bowl games, and the ninth-winningest coach in college football history, Holtz is still teaching and coaching, although he is no longer on the gridiron.

In his most telling work to date, the man still known as "Coach" by all who cross his path reveals what motivated a rail-thin 135-pound kid with marginal academic credentials and a pronounced speech impediment to play and coach college football, and to become one of the most sought-after motivational speakers in history. With unflinching honesty and his trademark dry wit, Holtz goes deep, giving us the intimate details of the people who shaped his life and the decisions he would make that shaped the lives of so many others.

His is a storied career, and Holtz provides a frank and inside look at the challenges he overcame to turn around the programs at William and Mary, North Carolina State, Arkansas, and Minnesota. From growing up in East Liverpool, Ohio, to his early days as a graduate assistant at the University of Iowa, to his national championship runs at Notre Dame and his final seasons on the sidelines in South Carolina, Lou Holtz gives his best, a poignant, funny, and instructive look into a life well lived.

Honestly, I did not really believe that I would be at all interested in this book. I like college football, and I knew that Lou Holtz was a famous coach from Notre Dame, but I never realized how much exactly he went through in his career as a coach. All of the coaching positions that he held throughout his career were all interesting in their own way. Throughout his career he came into contact with several football icons such as Paul "Bear" Bryant, Joe Namath, and Bill Parcels. Before, I had never thought of all the famous football personalities that were active during Lou Holtz's long career as a coach, but rather I had just thought that he coached in a time period where football was had very little activity and was far less popular. Also, he changed my view on the importance of having a good coach. Previously, I believed that all that mattered on a football team was the level of talent that they possessed. While this is still important, Holtz was still able to take teams that had horrible records the year before and then take them to a bowl game. Despite the great success he had as a coach, probably the most important thing about Lou Holtz was all of the philosophies that he implemented while coaching. These philosophies were centered on working hard, giving your best effort, and always doing the right thing. He implemented these philosophies in each one of the coaching positions that he held. Sometimes they even got him in trouble, for example, he suspended three African American players at Arkansas for a very serious offense, and since he refused to tell the public what the offense was, he was subject to nationwide criticism. However, no matter the situation, Holtz never allowed others to make him stray from his beliefs. Even though he has many great characteristics as a person, this one is probably the one I admire the most.

College Football! Whether you love it, hate it, or don't know anything about it, this book is an awesome and easy read! It may not be as interesting to someone who is not a college football fan but still an incredible read for anyone who wants to share his faith journey.

Lou Holtz! Love him, hate him (really? is there anyone?), or don't know a thing about him, this book is well written, humorous, and thoughtful - practical wisdom without the cliches.

Lou's writing is much like what his personality appears to be. He shares his experiences - his successes, his failures with honesty, intelligence in a direct and humorous fashion. He knows how to spin a tale so you don't get caught up in irrelevant details but can see the point he is trying to make. And he is always trying to make a point (that's the teacher in him, the Coach). But no cliches, often his point comes across before he even gets to it!

I can see how some readers may feel like he is name dropping. And, in a sense, he is - alot. But it isn't to gratify his ego but to demonstrate the fullness of his life experience. He has known and been friends with many legends. Names many folks my age [ahem] will recognize (not so sure about the younger generation).

This was a really good book. Despite not being a fan of sports (except maybe gymnastics) this book was full of information. It really had a lot of great life lessons from Lou Holtz who I am certain must have been a fantastic coach in all ways! I aspire to be like him in the way he teachers, coaches and mentors others. What an inspiration!

I love stories about little guys from little Ohio small towns making it big. I could never reach the same heights Coach has, but I can only hope to be an inspiration on anybody the way he has on thousands of people

I learned a lot about ol' Lou Holtz. It's hard not to be impressed with his success as a coach wherever he went, usually taking programs that were failing and turning them into national powerhouses. It really speaks to his ability to lead.
This book is a pretty honest self-assessment of the things he did well and the things he wishes he would have done differently and is done with the wit you would expect from him.
Finally, as a person of faith myself, I was impressed to read how much his faith is a part of his life. Prayer and worship were regular practices of his life and even more so of his wife who he said has never prayed less than an hour a day in each year of their marriage.

Lou Holtz is one of the most incredible coaches.His story is captivating, and his wisdom seeps through the pages. All of the things he has experienced and learned throughout his life are narrated in a fantastic way. I loved the way he took accountability for his own actions and added some of his wit!I thought it was great how he discussed the philosophy that allowed him to become one of the winningest college football coaches. I would recommend this book to any college football fan.

Great book by legendary coach Lou Holtz. It has great stories from all his years of coaching. It also says a lot about him as person. Coach Holtz's basic message is the world doesn't owe you a thing. You have to work hard & have discipline to be successful in life. A lesson today's current generation sorely needs.

Humility and childlike enthusiasm - this is a difficult combination to beat. I've read some coaching memoirs that leave the undeniable impression that the individual was hurt or bitter with those along the journey. Holtz writes one that is quite the opposite. You leave the final page as a better leader, excited for Holtz's journey.

Suggested to me by my father as one of his favorite books. Approached it hesitantly as I was not convinced it would interest me as I have little knowledge of football. I found immense comfort in reading this book as it is full of positive life advice and ways to approach life's challenges. I would absolutely read it again and recommend it.