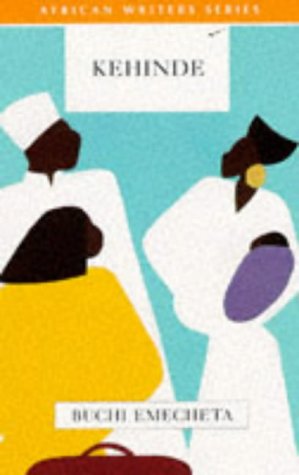 Reading Kehinde was a real treat, by turns devastating and joyful, and I'm so glad I picked it up. Kehinde tells the story of a Nigerian woman living in Britain whose husband decides to return to Nigeria for the newly-arrived economic opportunities to be found there and - more ominously - the "respect" he'd get as a big man, and the sense of fulfilment he'd attain being with his family, especially his sisters, whose intervention already causes Kehinde substantial uneasiness. Kehinde has doubts about this proposed return - she enjoys their life in London, and she has a good job at a bank, in fact earning more than Albert does at his job. When she tells Albert she's pregnant, he pressures her to have an abortion.

The power of this novel is to be found in its brevity and stark, plain language in speaking to patriarchy, power structures, familial coercion, and plain old cruelty. There's somehow something very striking about how Kehinde's life is changed without warning and then continues to unravel from thereonin - and something so uniquely identifiable, too, about how people you love and trust can suddenly change or show a side you weren't previously aware of. Emecheta is uniquely accomplished in depicting these about-faces, these commonplace betrayals, as a function of Nigerian classed and family structure. What holds it together is how unremarkable Kehinde first is, before the plot develops, and how complicit she was in those structures before they turned in on her.

There's also a subplot about the spirit of Kehinde's dead twin which, if I have to be honest, wasn't as developed as it could be, but did add an eerie, unsettling power to the story. Ultimately, though, this isn't a depressing novel, it's a story about joy and redemption, told in the most understated way possible: one of my very favourite parts was how she and best friend were able to forgive each other and help each other out (and one of my favourite lines in the novel is Moriammo's epistolatory aside: "By the way, the interest I mentioned earlier is a joke, just in case Nigeria has made you lose your sense of humour. You keep the money. It's a way of saying I am sorry for being such a wet blanket."). And how also, at the end of the day, the narrative was able to deliver sweet justice to Albert and Rike while having Kehinde be able to float away good-naturedly and live well, which is, of course, the sweetest revenge.

Brilliant and thought provoking! Makes me want to read her other works!

Great portrayal of Nigerian immigrants in London. Absolutely love how Kehinde stands up for herself by running away from the oppressing tradition that was imposed on women.

Interesting take on the experience of Nigerian immigrants in London, return to Nigeria, woman's awakening to herself in the face of conflicts with her culture.

I read this in my Modern British lit class, and I was enthralled. While it isn't the sort of thing I would've picked up on my own, I'm glad I read it. It's awesome because it explores the intersection of race, identity, gender, nationality and post-colonialism in such a simple but powerful way. It's short, too!

this book was interested story of a Nigerian woman in Britain in the 1960's and her struggle to get free from oppressive Nigerian culture. I was not that impressed with the writing style. Too often she had to tell you the point she was trying to make rather than letting the story do it.

I ordered this book online and waited expectedly since I had read several books by Buchi Emecheta and the wait was worth it. The only problem was it was too short. The book highlights the difference in a Nigerian family living in England and living in Nigeria.

Many people do not think of immigration in other countries outside of the United States, however many people see refuge in more developed countries around the world. This book is a great depiction of a woman's struggle within her own culture for freedom.