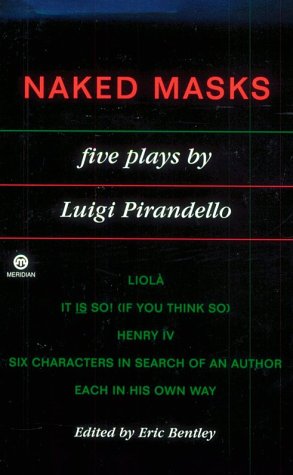 This special one-volume edition features five great plays by one of the most celebrated and fascinating dramatists of the twentieth century.

Pirandello, awarded the Nobel Prize in 1934, was the playwright par excellence of the conflict between illusion and reality. His modern and sensationally original plays dramatize with force and eloquence the isolation of the individual This special one-volume edition features five great plays by one of the most celebrated and fascinating dramatists of the twentieth century.

Pirandello, awarded the Nobel Prize in 1934, was the playwright par excellence of the conflict between illusion and reality. His modern and sensationally original plays dramatize with force and eloquence the isolation of the individual from society and from himself.

The editor, Eric Bentley, is an international theater authority. In addition to the Introduction and the biographical and bibliographical material in the Appendices, Mr. Bentley has prepared for this volume the first English translations of the play Liolà and Pirandello's important "Preface" to Six Characters in Search of an Author.

Included Plays:
Liolà
It Is So! (If You Think So)
Henry IV
Six Characters in Search of an Author
Each in His Own Way

Nobel Prize winning dramatist Luigi Pirandello's plays are strikingly original, or they certainly were during his life. Though I have never haunted the theaters of any city and the numbers of plays I've seen in all would be less than a dozen (not counting my high school days), and so I can never be counted as a theater critic, I'd have to say that four out of these five plays manage to touch on some of the basic issues of the human condition. I will discuss each separately. Obviously if I've given it five stars (not one for each!) I think the whole thing is worth reading.

LIOLÀ, the fifth play, might be subtitled "Pregnancy Italian Style". It's a comedy which didn't seem well-translated, being very difficult to follow. Perhaps in our less-buttoned up time, the humor here is a little old-fashioned. My main remarks are aimed at the other four plays.
Pirandello's continual questions are (more or less) What is truth? Can we say there is such a thing as Reality? If so, what does it look like? Doesn't each individual have his or her own version of truth and reality? Most topical in this ridiculous era of "fake news", but you have to ask, "Hasn't fake news---or "false" versions of reality---always been with us?
In IT'S SO (IF YOU THINK IT'S SO), Pirandello presents a mystery wrapped in an enigma. Who is crazy here? Maybe nobody, maybe all. The nosy townspeople try to learn the relationship between a recently-arrived government official, his wife, and mother-in-law. Pirandello's ending is brilliant.
In HENRY IV (which is not a historical play), he takes up the same theme: who is fooling whom? Is anyone mad here or is it a case of totally opposed visions of reality, completely different versions of life? "We mask ourselves with that which we appear to be." he says.
SIX CHARACTERS IN SEARCH OF AN AUTHOR must be one of the most original plays ever written and a template for many others that followed (though as I said, I have not seen them). "Life is full of infinite absurdities which don't even have to appear plausible because they are true." Again he asks what Reality really is.
EACH IN HIS OWN WAY also deals with shifting realities, shifting truths. In terms of the way the world is going in 2018, I would say these plays are powerful antidotes to the grunting, bellowing so-called leaders of the world, who play with truth and reality at the peril of all of us.

So much truth in fiction that it's absolutely absurd!

In these five great plays, Luigi Pirandello masks and unmasks human beings and displays their true nature and morality. He portrays how life is only a stage and we the actors, that we deceive ourselves, continue acting and live a fictionalized life on the stage, pretending that it is real. As in Liola, he says:"Pretending is a virtue. If you can't pretend, you can't be king." And that we believe in what we want to believe. The Father in ‘Six characters in search of an author’ says: “But don’t you see that the whole trouble lies here. In words, words….And how can we come to an understanding if I put in the words I utter the sense and value of things as I see them; while you who listen to me must inevitably translate them according to the conception of things each one of you has written himself. We think we understand each other, but we never really do…..”
It was great read.

One can't read Pirandello without feeling a sense of overflow,
and a constant questioning of convention .
This is most marked in Six Characters where the lives of the
characters seem to spill out from the reigns of their director.
But this theme runs through the other plays in this collection
and much of the rest of the work by this author. Perhaps
Pirandello is to the twentieth century play what Nitzsche
was to nineteenth century philosophy.

I haven't read a book of plays in a very long time, and I've owned this paperback copy at least since grad school, so in I went! I was less impressed with his "famous" plays - Six Characters in Search of an Author, Henry IV - but I enjoyed It Is So If You Think It Is So quite a bit. But by the fifth play, I was struck by how much he was just repeating himself from play to play. I read Eric Bentley's introduction to this edition, which has this incredibly blunt passage: "A first reading of his forty-four plays leaves us with an impression of monotony. A second reading calls our attention to grave faults in dramatic structure and grave limitations in character portrayal." Oh boy, glad I only read five, then.

Naked Masks is a collection of five plays by Luigi Pirandello, ranging over the course of his career from 1916 to 1924, and presented more or less in the order in which they were published. It contains the play by Pirandello that I was most familiar with, Six Characters in Search of an Author, and which sparked my interest in the collection. I was also curious as to whether there were any dramatic works out there--other than Shakespeare's--that would hold any interest for me. For those who dislike long reviews, and would prefer to cut to the chase, I'll say up front that I thought Naked Masks an excellent introduction to an author and his works that I had mischaracterized badly, and I'd highly recommend it for those interested in 20th Century theater, as well as works that explore the nature of reality and perception.

In his introduction (written in 1952), Eric Bentley briefly touches on Pirandello's reputation as of that time: 'I have met persons,' it reads, 'who rejected (Pirandello) because of his 'tiresome ideas' without being able to give me even their own version of what these ideas are.' That's a bit more harsh than I would like to have it, but in effect, it comes close to describing my preconceived notion of what Pirandello was about--notions formed as a young whippersnapper that were never really revisited nor revised. I think that, being from the Midwest, I had picked up by cultural osmosis a deep distrust for certain types of art--art I suspected was designed solely for the purpose of mocking rubes like me, and the very title Six Characters in Search of an Author seemed to define that sort of art. In my mind, I imagined an effete snobbery behind a play like that, the enjoyment of which was reserved for a certain strata, which would sail right over the head of the uninitiated. So I rejected it in order not to be ridiculed by it.

Now, that's entirely too much personal information for a book review, except that it just so happens to finely parallel the themes in these plays that resonated the most with me--the nature of people's perception of things and the reality of those things. More explicitly perhaps, is that people's perception of things are reality, for them. In the first three plays collected here, the characters are continually confronted with alternating versions of what is real--often contradictory and overlapping. In the final two plays, Pirandello exploits the conventions of the theater in order to shift that uncertainty from the cast to the audience. Is it always successful? Well, reading a play rather than watching it performed seems to sap much of its inherent force, but I can say that these plays were intriguing and thought-provoking and fun, in their presentation, even though the subject matter was rather dark. To fully evaluate or appreciate them, I'd think watching a good stage production is probably key, though I don't know how often this sort of thing is produced. (There is an adaptation of Six Characters available on Amazon directed by Stacy Keach and starring Andy Griffith--two names I would not have thought to connect to this sort of thing, but there you have it. There is also a 1949 television production from CBS of HENRY IV in the public domain that can be googled with the search words 'Westinghouse Studio One Henry IV internet archive'. I'd recommend this more for its camp value than anything else, but what really seems unbelievable to me is thinking of some Archie Bunker type in 1949 coming home from the steel yards or a Detroit factory, sitting down in his tank-top undershirt, popping the top of a cold beer after work, and tuning in for his evening's entertainment to a stage production of HENRY IV by Luigi Pirandello.) All that aside, I thought these plays were an eye-opener for me--they seem to presage a lot of literary output (and not just theatrical output) to follow, and that NAKED MASKS is not only a good introduction to Pirandello, but to those modernist works that came after.

Bought this for $2 to read Henry IV. A searing play about madness, reality, and history.

"Did you want to be born, Monsignor? I didn't! And in both cases, independently of our wills, so many things happen we wish didn't happen, and to which we resign ourselves the best we can..." [Act 1:]

"I would never wish you to think, as I have done, on this horrible thing which really drives one mad: that if you were beside another and looking into his eyes - as I one day looked into somebody's eyes - you might as well be a beggar before a door never to be opened to you, but someone unknown to you with his own different and impenetrable world..." [Act 2:]

This book had been sitting on my shelves since high school! We had read it in book club in high school, but I didn't remember a thing about it. So, I picked it up to read through it and couldn't even finish. I started with the first play, Liola. It's basically a personality study about a young man who is a playboy and the intrigue that builds around him and another couple who is barren. I found it quite dry. The second play, It IS so!, I couldn't even finish because I couldn't really understand it. Then, I tried starting Henri IV and found it so dry that I decided I'd reached my limit with this book. I'm not used to reading plays, which may have swayed me. But, I think this just wasn't my cup of tea, then or now.

Pirandello does a nice job of toying with the question of what constitutes reality and what is mere social construction or societal opinion. I particularly enjoyed Henry IV for the self-aware madness of a protagonist who believes he is Henry IV, but knows he isn't, but pretends he doesn't know.

I should read more plays.