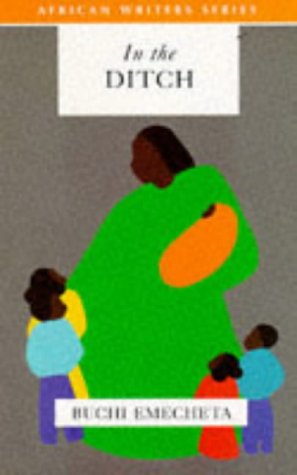 A lone Nigerian mother is determined to carve a place for herself against all odds.

A lone Nigerian mother is determined to carve a place for herself against all odds.

This is such an extraordinary book. I bought it after watching a programme about African British Writers on the BBC. It writes about a very difficult subject but with a light touch which I wasn't expecting. In the first few pages I laughed at the Juju African landlord and was filled with joy at the image of Adah sitting in a park surrounded by daffodils. In spite of the terrible poverty that Adah has to deal with as a single mother with five children, she manages to find moments of joy and friendship. Probably this resilience was what led the real life Buchi to triumph over the odds and make a success of her life. It's saddening how little has changed and much of what has changed in social services hasnt been for the better. Adah was encouraged to give up her job and concentrate on raising her children and getting her degree by her social worker. Today she would be pushed into a zero hour contract.. and when the families are moved out of the slums she goes to a new block of council flats in an upmarket part of London. That same block of flats has probably been gentrified and become completely unaffordable now.. with no social housing to take it's place and single mothers sent to live in cheaper parts of the country.

This book was lent to me by a roller derby teammate, and is a prized possession of hers. I'd never heard of this author - this is Emecheta's first novel and is semi-autobiographical. It was written in 1972 but the style doesn't feel "old," it's clever and sharp. Our protagonist, Adah, is a single mother of several young kiddos living in a slum in London, going to school at night to get a degree in sociology and trying to figure out how to live. She has many questionable interactions with neighbors and locals, who say "I don't care about your color" and "one of your people..." which reflect on the more overt racism of the day but still resonate in today's world. Adah's thoughts on these matters are a little sarcastic but also a little maudlin.

I like the "Juju Landlord," a fellow Nigerian who is trying to evict her and her family with witchcraft! I love her reflection that in Africa this would be a big deal and terrifying, but in London it's merely ridiculous, and the neighbors are like WTF...

What also struck me was her conflicted feelings toward her social worker. The social worker Carol gets her grants, helps her with basically everything, so Adah feels indebted... except that Carol spills Adah's personal life all over the place. Adah shifts between adoring and despising Carol, which I suppose is reasonable.

I also liked Adah's reflections that her public housing complex was like a compound in Africa. Everyone in everyone else's business, no privacy, but lots of support and companionship. When you move to a "proper" flat, you're a stranger to everyone. After two years in Africa I felt this too, like the US communities would be sterile and lonely. Which they are unless you do something about that. Then they're not.

A fascinating outsider's look at the British underclass and the Welfare State in the 1960s, no less relevant today than it would have been when published. Of particular interest will be the state's insistence that Adah give up work.

I used to live in a working class area. I had been built post war as a slum clearance area. It was a bit of a shock. When I met my neighbour I was polite to him. He took it as a sign of weakness. First he went to the council and tried to get me evicted. When that didn't work he tried to break into my home and attack me. The police had to come. Interesting to see a similar pattern in Adah's confrontation with the Smalls. It must be a cultural thing.

A couple of small flaws: there are some wonky sentences and the dialogue is stilted. As she points out though, English is her second language. This didn't even occur to me when reading The Joys of Motherhood, by which time she had achieved complete mastery of her tool.

Small quibbles though. She orders her material well and knows how to tell a story.

A positively excellent book. Since reading it in Nigeria years ago I have purchased all her books. I finally met Buchi Emecheta in LA City College where she was lecturing in 1989. She overcame many difficulties raising her children in England after her husband left her, and became a brilliant author. Her advice to me since I told her write, was to keep everything simple.

My favorite work by this author so far. I am slowly plowing through her collection of literature.