Home › Authors › Virgil › The Eclogues and The Georgics... 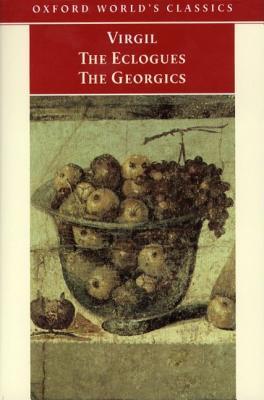 The Eclogues and The Georgics

I enjoyed the Eclogues, particularly: I, II, III & VII. The Georgics were not to my taste, although I suspect this may partly be due to the translation.

His first poetic collection, the Bucolics, features shepherds who talk, exchanging their ideas and sharing their feelings. This feature allows Virgil to sing his love for nature which is both a source of nostalgia and fulfilment. But it is also an opportunity for him to express his dismay at the civil unrest of the time.
The Georgics retain the country decor. This poem has, unlike the collection of the Bucolics, an academic aspect. The author describes the works of the earth by releasing their techniques, and especially, by extolling their unknown charms.
By giving an example to the citizens of country life, which he praises the simplicity and wholesomeness, Virgil brings in some way, its contribution to the politics of the time!
But he does not lower himself to a kind of simplistic propaganda.
The Georgics is like a hymn to essential values, a great song of the beauty and grandeur of nature.

This wasn't the edition I read; mine was in Latin. I had to translate the Eclogues into English for a course. Maybe they would have been better had the class not met at 8 a.m.

Oliver Lyne, the editor of this translation of Virgil's first two works, seems not to like the translation very much, criticising Cecil Day Lewis for being unclear or misleading at least three times in the introduction, which seems like a bad marketing idea.

CDL's verse translation is not metrically regular, usually I think iambic but with a lot of flexibility, and the lines are very long, from 11 to 16 syllables each, and very often enjambed in a way that disguises the line ending, so it sometimes has a prosy feel. It's conversational, accessible, with a few colloquialisms and contractions, but there are lyrical parts that as a result stand out a lot.

In Eclogue III he rhymes 'ditties' with 'titties' which kind of ruins the immersion for me, as they say. Kind of hard to come back from that, but here's a good passage from the final Eclogue:

But I shall go and set to music for the Sicilian
Shepherd's pipe the poems I write in Chalcidic verse.
I shall live hard in the forest, where wild beasts have their lairs--
My mind is made up--and cut the name of my loved Lycoris
Upon the young trees' bark: my love will grow as the trees grow.

A fantastic translation of Virgil’s poetry - unusual, free, interpretive and contemplative. It’s not a straight translation, so those looking for something following Virgil’s meter and form should look elsewhere. But this interpretative translation adds a whole another dimension, relating the ancient Roman world to modern times.

No it's not the most faithful translation. But it's a fun interpretation and as a hobbyist Classicist, I enjoyed it, especially the Georgics.

After reading some of the reviews I'm convinced that I don't have a literate opinion. This reading was a second time for me. The first I read was a different translation back in the 1980's and I had trouble seeing the words on the pages. The same thing happened again with this edition. I have reading glasses, but the sentences kept fading on the page. This phenomena has never happened with any other book and I've read 1,000 books to date. I can only say that the title is haunted and some god or goddess who does not want me to read it cursed the title for me. I did it anyway. It was beautiful. Pagan and decadent I found words of wise and uninhibited lust in the Eclogues and true husbandry in Georgics. As a layman of Latin I found the names at times unrecognizable but the translation I read was readable. I'll chalk my vision problem up to the words being so bright and the source of intense condensed thought from the origins of the Western Civilization. You can't see the sun without a devise that prohibits being blinded by it. Overall getting a glimpse of Roman bucolic writing was a nice experience.

It’s Vergilius, what do you want me to say? I’d give him six out of five stars if I could.

I love used book sales. If you’ve ever gone ‘garage sale-ing’, then you’re probably familiar with the types of pushy scavengers that you might meet at a used book sale. You’d almost think Dickens had these bibliophiles in mind for his caricature of Scrooge in the opening chapter of A Christmas Carol: “…a squeezing, wrenching, grasping, scraping, clutching, covetous old sinner! Hard and sharp as flint, …secret, and self-contained, and solitary as an oyster.” Solitary, that is, until they catch the scent of a musty book in the air that could be had for a buck. Watching the doors open for a used book sale can cause you to lose faith in humanity. But as I said, I’m a used-book scavenger myself, and I only hope that my love for life ultimately outstrips my lust for books.

So what does this have to do with Virgil? Well, I found a book containing three of Virgil’s works at the last sale (with over a million books!…humina, humina), and I tucked it away on a bookshelf for a rainy day. Well my friends, that day came a week ago. Imagine, if you will, me deciding on a whim that I REALLY wanted to read some of Virgil, forgetting that I had the book on hand, scouring my shelves for the next book to read, and stumbling upon this little ruby. I AM! I actually wanted to read only the Eclogues and Georgics, not the more famous Aeneid, mostly because I’ve heard that the former were much more poetic than the adventurous latter. My plan is to read the whole of Dante’s Divine Comedy soon (I’ve only read the Inferno up till now), and for some reason it has always intrigued me that Dante, one of the most celebrated authors of all time, chose Virgil as his guide through Hades.

The Eclogues are pastoral (rural) poems and songs written in the tradition of a shepherd sing-off. Speakers take turns trying to ‘one-up’ their opponents in a friendly game of lyrical improvisation (freestyle rap battle!!) about the country life. I’m sure in the day they had their Eminems and Jay-Z’s, but this is hardly anything a 21st century man can relate to. Between the references to antiquated cultural traditions and the constant allusion to Roman mythology, I wasn’t able to make much of it. Unfortunately you’ll need a history/mythology buff to help break down the ‘thick accent’. It’s almost lost to all but a few super-conditioned readers.

The Georgics, on the other hand, were a different story altogether. I wouldn’t quite give it the accolade that was offered in the introduction of the Modern Library version: “…perhaps the most perfect work of Virgil…No one who reads the magnificent passage in the second book (lines 136-137) can fail to be thrilled with its patriotic fervor.” I beg to differ with you Charles L. Durham (whoever you are), I failed to be thrilled by almost all of it. Don’t get me wrong, I do sense the Shakespearean brilliance and perpetual poetry of every line crafted with the utmost care to extract the sweet wine of beauty and truth out of every word, but I must be a few millennia off. Doesn’t hit me quite the way Shakespeare does, I’m sure because I speak the same language and I’m in the same general epoch as the Man. There were a couple sublime verses that I could detect, however, like:

“The grasses dare in safety to trust themselves to spring rain.”
“Neither might things so delicate endure this their toil, except such space of calm passed between the cold and the heat, and earth were cradled by an indulgent sky.”
“Lost to fame, let me love stream and woodland.”
“But we have crossed a boundless breadth of plain, and now is time to loosen the necks of our steaming horses.”
Overall, I considered this worth my time. If nothing else, it’s a piece of history and some of its poetry remains translucent for us. I hope to read the Aeneid sometime in the future, and even sooner I plan on picking up The Divine Comedy to be reunited with this Dante’s dubious choice of a guide.