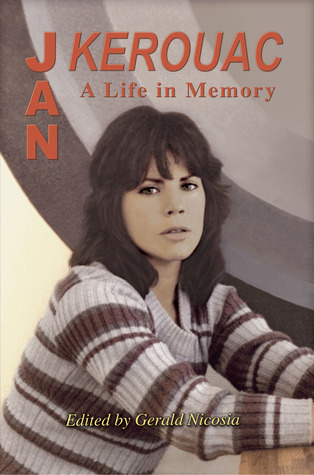 Jan Kerouac: A Life in Memory

A truly moving portrait of a great writer and great artist and troubled woman who constantly lived under the shadow of her famous father. This is a collection of memoirs from people who knew Jan throughout her life - either as professionals, lovers or close friends.
This book made me feel really angry at the Sampas family and their merciless efforts not only to sideline Jan but their crusade to expunge Jan completely from the historical record. Finally the law courts determined that Stella Sampas forged Gabrielle 'Memere's' signature so that the rights to the Jack Kerouac estate would fall with her family - i.e. we are talking big big bucks. Not only that but some of the Sampas proceeded to sell off various Kerouac memorabilia such as his raincoat to celebrities like Johnny Depp. Sacrilegious.
Jan wanted to be remembered as the person who saved her father's archive, more than just 'Kerouac's daughter' which is not surprising considering she only saw him twice and talked to him once in a drunken late conversation over the telephone. Jack Kerouac was a great revolutionary writer and poet but he was not exactly Father of the Year. The interview with Jan at the end of the book with Gerald Nicosia, author of the fantastic Kerouac biography Memory Babe, to me was the really clincher of this book and for the majority of the interview, Jan focuses on her rather complex feelings and relationship to her daddy Jack.
It is hard to find copies of this book but grab a copy the first time you see one. Highly recommended.

This reporter bonded strongly with the Beat Generation in his early writing years, irrevocably so, though he felt myself to have long since outgrown their effect by the time he was tapped to write their Denver history (version one). Now he finds himself integrally positioned in that lineage, selling copies of his books at the Neal Cassady Birthday Bash two times straight now (he'd never gone before, but always wanted to), editing and seeking a publisher for Neal Cassady's orphan, Robert Hyatt's memoir, An Adoptee's Portfolio, and, after running across his name in a Facebook thread, giving author and Kerouac biographer Gerald Nicosia (whose Memory Babe was pronounced the "most reliable" of Kerouac biographies by those in the know) my solemn pledge, in honor of the late Jan Kerouac, who I wish I'd ever met, to help restore the rightful proprietorship, both historically and financially, of her father's legacy. I am now saying so publicly. Nicosia’s essay in The Worst Book I Ever Read clued me in to a few previously unknown and potentially explosive facts about Jack’s life and his relationship to his daughter and in-laws, the Sampas family of Lowell, Massachusetts. The Nicosia-edited Jan Kerouac: a life in memory, a compendium of remembrances by those who knew her - including Nicosia himself and Neal and Carolyn Cassady’s son, John Allen, who proposed marriage to the stunning Ms. Kerouac upon their first meeting –
CONTINUED AT THE LINK BELOW
http://www.examiner.com/review/gerald...