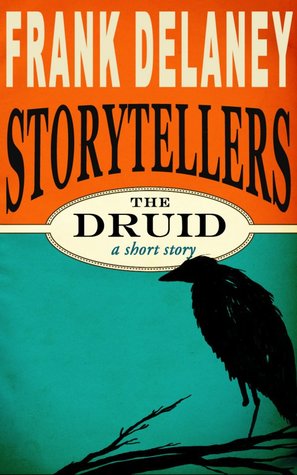 The Druid (Storytellers Book 1) - Frank Delaney I'm reaching into the vault for this week's book. I read the first couple of Storytellers short stories by Frank Delaney when they first came out, a few years ago, and recently realized that I'd lost track of the rest of the series. Which is too bad, for Delaney spins a fine yarn.

For those on this side of the pond, Delaney was a writer and broadcaster in Ireland and the UK for more than thirty years. He's somewhat of an expert on James Joyce, and he has been a judge for the Booker Prize. I read his novel Ireland years ago and was charmed by it -- and not only because he named one of his characters Mrs. Cantwell.

The Storytellers series was, I think, conceived as a promotional vehicle for his most recent novel, The Last Storyteller (which I have not read). The short stories and the novel came out at about the same time, and the first chapter of the novel is included with The Druid. Which I should probably get around to reviewing now.

The story is set in Ireland, and the main character is a fake druid named Lew. The ugly little fellow decides he must marry Elaine, the fairest young girl in the neighborhood -- not because he loves her, but because he's convinced her wealthy father will set them up for a life of ease. Alas, Elaine is already promised to another -- a stranger who is shortly to arrive to collect her. Lew and his one-legged crow have only a few days to figure out how to trick Elaine into marrying him.

Delaney's tale is told effortlessly and with a great deal of fun. As you read it, you can almost imagine yourself gathered with your loved ones around the hearth while the Old Storyteller weaves his tale about you all.

I need to find the other stories in this series. Highly recommended for those who love a good tale.

Frank Delaney is a master storyteller. I enjoyed this short story and look forward to the others in this series. I have never listened to an audio book, but I feel like the only thing that would make this better is if it was available on audio. That way, it would feel more like one of the storytellers of old was reciting the story to you.

So sad Mr Delaney passed away before being able to publish more than 4 of his folklore collection.

Frank Delaney begins this story with a preface about the well-known Bards of Ireland, their various names, their powers, political connections, place in the community, and their wonderful story-telling abilities. Frank Delaney here continues the tradition in this series of short stories, the first being "The Druid"!

This is a truly magical story about a crazy Druid who also knew how to manipulate the people he served with his powers. It's such a short story and not to be ruined by telling too much about it. It contains the proverbial phrases and comments that helped expand a bard's story, but most of all it tells of how much the common Irish farmers trusted the Druid with their present and future, even down to the focus of this story, the possible wedding of a beautiful daughter to one known and one unknown suitor! Every utterance of advice was honored as if it came from the divine!

The Druid is an annoying but funny guy whose end will delight every reader! Frank Delaney is a true Bard sharing his love of fable, legend and stories in the 21st Century, and readers are privileged to enjoy every literate story and novel he writes. Lovely!

Masterful Blend of Dtory and Style

This review is from: The Druid (Frank Delaney Storytellers) (Kindle Edition)
Understanding the nature and the rules of the Oral Tradition of storytelling is something Frank so eloquently illustrated in his best-selling book, "Ireland"; bringing a traveling storyteller to our fireside and allowing us to be transfixed by a blend of story and style. It's a heady mixture, and one to which we willingly surrender.

In this brilliant, canny short-story, he shows us again how storytellers weave their own magic, full of subversive ideas, powerful images and the lyrical music of language.

And if you are like me, you will imagine the faces of your family and friends, glowing at the fireside - all of you collectively holding your breath at moments of tension, smiling at a particularly beautiful description, laughing out loud at the pure wizardry of great story-telling!

Everyone Loves a Good Story...

And you certainly won't be disappointed with this one. I found myself feeling like I was in ancient times reacting to the storyteller. There is something about Frank Delaney's writing that mesmerizes me at the get-go. I wanted to like the Druid as a wise and worldly, little man, but his means of getting Elaine were horribly dishonest. In the end he is caught in his own falsehoods. What one will do to "get the girl ." The question here is: Did he love the girl or did he love what came with the girl? Read this short story for you shall see. Imagine you are sitting around a hearth-fire, in an Irish cottage or a pub in Ireland listening to the storyteller. Frank Delaney is brilliant in his creative abilities, and with prose that will have you asking for more.

".... and an old man with a long parchment face comes in, shakes the weather from the shoulders of his long black coat, sits down, accepts a glass of whiskey, lights his pipe and begins...

Long long ago, when the pigs ate the apples off the trees and the birds flew upside down, there lived a crazy druid. Who wasn't crazy at all. He was a busy fellow, because the Irish people have always been interested in religion, and he made a good living by pretending sometimes to be crazy. Let's say that he was a man who had an unusual way with belief."

So begins The Druid, a somewhat non-typical Frank Delaney tale, the first story in Delaney's new Storytellers series of short stories. The Druid, in more typical Delaney style, manages to wander a bit here and there adding delightful asides to his story as he meanders from beginning to end.

"The Druid" is available to borrow from the Kindle Lending Library (for free) for those who own a Kindle.

If you think of druids as wise old men with sweeping cloaks singing in the moors and praising the moon around their standing stones, then think again. In Frank Delaney's first installment of his new Storyteller series, the druid is sneaky, mischievous, and sometimes downright unpleasant.

Mr. Delane's story, however, charms right from the start. I can imagine myself sitting around a fireside, listening to an old man with a pipe telling us a tale that keeps us all leaning in so closely we are nearly burned by the fire. The language is powerful and delightful, and the oral tradition of storytelling is so alive and vibrant here that it makes me long for something I never knew.

The story is a little creepy, a little whimsical, definitely unexpected, and most of all beautifully and richly told.

And unlike so many short stories for Kindle, this is a true work of literature. Highly recommended.

Master storyteller Frank Delaney brings us a brand new story in an ancient vein. If you read Ireland, a Novel, you'll recognize the style: a story that could have been told by your grandfather (if he was a natural orator), full of history and legend, malice and heart.

The Druid in this tale is a bit of a bastard, making his own way in a wild and fearful world where shadows lurk in every hollow tree. Like all of Delaney's characters, though, once you've met him you'll never forget him.