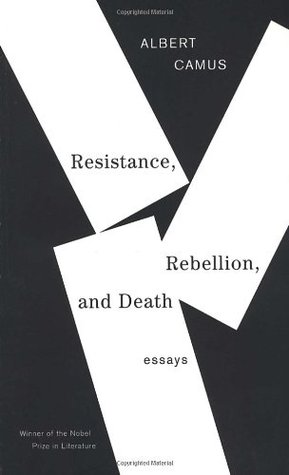 In the speech he gave upon accepting the Nobel Prize for Literature in 1957, Albert Camus said that a writer "cannot serve today those who make history; he must serve those who are subject to it." And in these twenty-three political essays, he demonstrates his commitment to history's victims, from the fallen maquis of the French Resistance to the casualties of the Cold War In the speech he gave upon accepting...

"I continue to believe that this world has no ultimate meaning. But I know that something in it has a meaning and that is man, because he is the only creature to insist on having one"
166 likes
"And I should like to be able to love my country and still love justice. I don't want any greatness for it, particularly a greatness born of blood and falsehood. I want to keep it alive by keeping justice alive."
30 likes
"But in order to speak about all and to all, one has to speak of what all know and of the reality common to us all. The seas, rains, necessity, desire, the struggle against death--these are things that unite us all. We resemble one another in what we see together, in what we suffer together. Dreams change from individual, but the reality of the world is common to us all. Striving towards realism is therefore legitimate, for it is basically related to the artistic adventure."
16 likes
"To create today is to create dangerously. Any publication is an act, and that act exposes one to the passions of an age that forgives nothing."
15 likes
"It is better for the intellectual not to talk all the time. To begin with, it would exhaust him, and, above all, it would keep him from thinking. He must create if he can, first and foremost, especially if his creation does not side-step the problems of his time."
14 likes
"Despite men's suffering, despite the blood and wrath, despite the dead who can never be replaced, the unjust wounds, and the wild bullets, we must utter, not words of regret, but words of hope, of the dreadful hope of men isolated with their fate."
12 likes
"It is true that freedom, when it is made up principally of privileges, insults labor and separates it from culture. But freedom is not made up principally of privileges; it is made up especially of duties. And the moment each of us tries to give freedom's duties precedence over its privileges, freedom joins together labor and culture and sets in motion the only force that can effectively serve justice. The rule of our action, the secret of our resistance can be easily stated: everything that humiliates labor also humiliates the intelligence, and vice versa. And the revolutionary struggle, the centuries-old straining toward liberation can be defined first of all as a double and constant rejection of humiliation."
12 likes
"In short, whoever does violence to truth or its expression eventually mutilates justice, even though he thinks he is serving it. From this point of view, we shall deny to the very end that a press is true because it is revolutionary; it will be revolutionary only if it is true, and never otherwise."
11 likes
See All Quotes From "Resistance, Rebellion and Death: Essays"