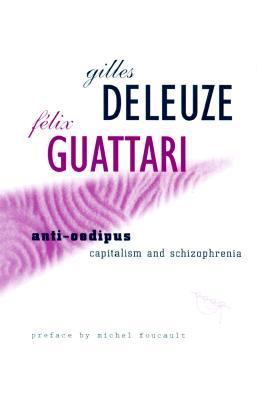 1983 by University of Minnesota Press

Quotes From "Anti-Oedipus: Capitalism and Schizophrenia"

"It is not the slumber of reason that engenders monsters, but vigilant and insomniac rationality."
139 likes
"The fundamental problem of political philosophy is still precisely the one that Spinoza saw so clearly (and that Wilhelm Reich rediscovered): Why do men fight for their servitude as stubbornly as though it were their salvation?"
134 likes
"Shit on your whole mortifying, imaginary, and symbolic theater!"
101 likes
"Courage consists, however, in agreeing to flee rather than live tranquilly and hypocritically in false refuges. Values, morals, homelands, religions, and these private certitudes that our vanity and our complacency bestow generously on us, have many deceptive sojourns as the world arranges for those who think they are standing straight and at ease, among stable things"
77 likes
"Christianity taught us to see the eye of the lord looking down upon us. Such forms of knowledge project an image of reality, at the expense of reality itself. They talk figures and icons and signs, but fail to perceive forces and flows. They bind us to other realities, and especially the reality of power as it subjugates us. Their function is to tame, and the result is the fabrication of docile and obedient subjects."
66 likes
"Do not think that one has to be sad in order to be militant, even though the thing one is fighting is abominable."
61 likes
"The individual is the product of power."
46 likes
"D.H. Lawrence had the impression – that psychoanalysis was shutting sexuality up in a bizarre sort of box painted with bourgeois motifs, in a kind of rather repugnant artificial triangle, thereby stifling the whole of sexuality as a production of desire so as to recast it along entirely different lines, making of it a ‘dirty little secret’, a dirty little family secret, a private theater rather than the fantastic factory of nature and production"
30 likes
See All Quotes From "Anti-Oedipus: Capitalism and Schizophrenia"