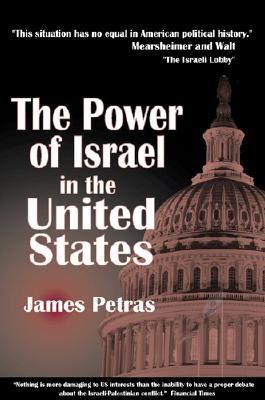 Power of Israel in the United States

This was written back in 2006 when there was little media attention of Israeli lobby groups influence of US middle eastern strategy. Reading it nearly 15 years on, it appears to have been very accurate in its grasp of the power Israel has over pointless strategies (for the US and allies) and the ongoing prosecution of war in the middle east.
My only issues with the book is the one-sidedness of the writings and the pushing of a wider socialist solution to resolve these conflicts, rather than addressing the United States issues regarding lobby group power.
However, overall this is a very enlightening and well researched book.

In The Power of Israel, Petras, given the year he was writing, begins by focusing on the question “Who Fabricated the Iraq War Threat?” His answer echoes that of others such as Pat Buchanan, Kevin MacDonald, and Mearsheimer and Walt: “The Jewish Lobby.” In a nutshell, Petras argued, “The tyranny of Israel over the US has grave consequences for world peace and war, the stability and instability of the world economy, and for the future of democracy in the US.”Edmund Connelly

I don't really have much of an opinion on this book. Mainly because Petras comes off as a terrible writer. Yes, the Israel lobby is one of the most powerful lobbies in the country, but this book leaves you feeling that the Israel Lobby is the ONLY lobby that shapes American foreign policy and any such view should be held with great suspicion. However, I do agree with Petras that Chomsky tends to dismiss the Lobby's significance.

The problem with this book is that it is written with too much passion. Petras leaves himself very vulnerable to attacks of anti-semitism (even if this is not the case). The facts should have been presented in a much more toned down and academic manner. Also, from an aesthetic standpoint, the layout sucks. It is written like a newspaper article with bold excerpts of the text set apart from the main body every few pages.

Not sure when I will get to this, but hopefully someday . . .

He didn't say anything new about the actions going around, but the mechanisms is very shocking, very interesting book.

This is an awesome book. A lot of truths in one book.I would recommend this book to anyone looking for proof about the influence of the Jewish Lobbies upon the world.

I just found this book through a friend. I have the translated edition. I hope it presents something new. I do not like the translation. Thanx God I found the original book.