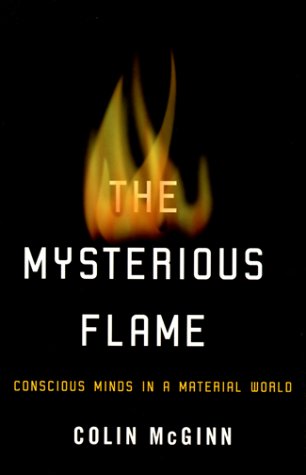 The Mysterious Flame: Conscious Minds In A Material World

If naturalism is true, or at least the best metaphysical structure for going about solving certain perennial problems, or if we recognize at least that naturalism is superior to theism (it is), then this is probably the best book on the mind-body problem and its necessary intractability. Can robots ever be conscious, are there still 'selves' in alzheimer patients, can non-organic material be conscious, etc? The only current answer, and most likely indefinite answer, is agnosticism coupled with ruthless skepticism as McGinn argues. We do not know now, and probably never can. Revel in the mystery though because it's far more mysterious and intriguing than how many angels can dance on a pinhead, or how does Christ embody himself in your wafers and wine....

McGinn's central thesis is that the solution to the mind/body problem is cognitively closed to human beings. That is, due to the structure of our brains, we will never be able to understand the mind/brain link.

The motivation for this thesis--that materialistic explanations of consciousness have been thus far deeply and conceptually off-base--is interesting and correct, I think. However, McGinn's book is rife with inconsistencies and his line for what we do know and what we do not know seems rather arbitrary throughout.

Also, perhaps because he had to fill over 200 pages in a book with the main point that we have not solved the problem, McGinn rambles hopelessly, especially in the later chapters. He discusses a wide variety of problems related to the problem of consciousness and his conclusion is always that same: we do not know and we probably cannot know.

Yet, this book is a quick read and worthwhile because it does highlight a very important point: that consciousness is a mystery!

I began reading this book knowing full well that the mystery of consciousness has not been solved, and most likely never will be. However, I was hoping to gain some insight as to way this is so. I found nothing in this book that could not be discovered through very basic introspection. The author contrives outlandish hypotheses, seemingly just for the sake of proving that it couldn't explain consciousness. This book rambles on, in what seemed like an eternity, to get to what most of us know anyway.

I've seen McGinn on youtube and found him an endearing, affable and capable person. What I didn't like about this book, apart from its repetitive style, is that whenever McGinn makes reference to some other discipline to illustrate his argument, he gets it wrong. Paleoanthropology, biology, history, physics---he draws on all of these without knowing much about them, and the results are disappointing.

Very interesting and cleverly written book about the mind-body question. I don't agree with some of McGinn's ideas but he certainly made me think.

A very entertaining read for a non-professional to catch up on perspectives on the ol' mind/body problem. Mr. Mc Ginn's own take on the issue is that if you take it at all seriously, meaning you don't collapse consciousness into a totally materialist base, then the problem probably will never be solved. This because the human brain has evolved to solve problems in space, with linguistic logic an added twist, and that kind of brain does not have the ability to think in such a way that it can conceive of a piece of meat providing consciousness. It is not that it is so complex, it is just in a different universe from the one that abides in the Homo Sapien cranium. He points out in passing that philosophy, unlike the sciences, never really advances because their problems are perhaps at the frontier of the human ability to comprehend and interpret. With some deep mutation in our brain structure, these confusions might disappear while others would surely take their place.

one of truest things I've read to date

This is an interesting idea, but there are a couple of problems with the way McGinn handles it. First of all, people have come up with this idea before; he's not really adding anything new, as far as I can tell. Schopenhauer already said the same thing: that consciousness is that which represents the world as it is extended in space and time, and therefore it itself cannot be known in terms of space and time (that which knows everything and is known by none, I believe he put it somewhere in the World as Will and Representation). Secondly, McGinn makes his own argument far less interesting than it could be by merely saying that the brain-mind problem may be insoluble, but may not be--the only argument for its insolubility is that we've not yet solved it. He likens it to other problems we may never be able to solve, like whether aliens exist (if I recall correctly). The problem with this is that he's denying the fundamental difference between the brain-mind problem, on the one hand, and all problems in space and time, on the other. The latter are all, in theory, soluble by us humans. The former not only may not be solved, it cannot be solved, because it is by the existence of a consciousness that time and space exist at all, and therefore we cannot know consciousness in terms of that which it enables to exist, i.e. time and space.

Whether you agree or disagree with his argument, McGinn has put forth an exceptionally well written piece of work. The literature is accessible to both the philosophical scholar and the layman thus creating an enjoyable and thought provoking read.

Interesting idea, but shows a great lack of insight on the authors part. To base such theories on conclusions drawn from the premise that consciousness
MUST reside within the physical body is very limiting. I can't help but think that other very real possibilities exist. It seems as archaic and misguided as thinking that if one destroys a radio with a hammer, they have in some way destroyed the song that is playing. Obviously this is nonsense, we know that the song was only being picked up by the receiver which had been properly tuned.