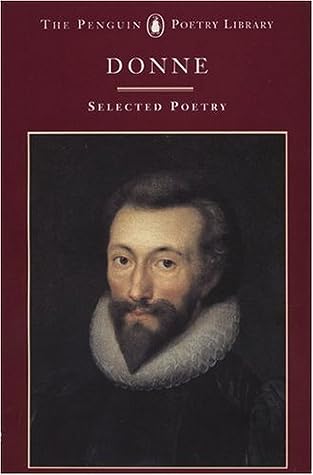 John Donne is very much a poet for our time.

Although his reputation has suffered periodic eclipses, it has increased steadily since the publication in 1633 of POEMS BY J.D. WITH ELEGIES ON THE AUTHOR'S DEATH. This century, however, has been remarkable for the broadening and deepening of interest in his work.

A poet of love and friendship, Donne also employed dialectic, mono John Donne is very much a poet for our time.

Although his reputation has suffered periodic eclipses, it has increased steadily since the publication in 1633 of POEMS BY J.D. WITH ELEGIES ON THE AUTHOR'S DEATH. This century, however, has been remarkable for the broadening and deepening of interest in his work.

A poet of love and friendship, Donne also employed dialectic, monologue and psychological analysis to wrestle with his religious, philosophic and personal doubts and with 'the wearisome condition of humanity' in a world that appeared as puzzling and riven as ours does today.

From his early Songs and Sonets, Elegies, Ephithalamions and Satyres to Verse Letters, Anniversaries, Epicedes, Obsequies and Divine Poems, Donne's extraordinary, rich, complex and demanding poetry expresses, as John Hayward comments in his introduction, 'for us our hopes and fears of an analogoous human condition'.

An interesting body of work. In the way many poets used (and still, somehow, use) their classical education as source of allusive plunder, Donne drew extensively from his training in scholastic philosophy and theology at a time when, as this book's introduction points out, these ideas were already a bit out of fashion. But he used them in surprising ways, as in the love poems of the "Songs and Sonnets" section of this book. They are frequently described as "sensual" but this doesn't really do them justice. In the famous poem "The Flea," for example, a flea bites the poet and his lover in succession, mingling their essences and providing the poet with ammunition for a highly metaphysical attempt at seduction.

But as anyone who was raised Catholic could predict, the boldest sensuality is found the devotional poems. Witness:

At the round earth's imagin'd corners, blow
Your trumpets, Angels, and arise, arise
From death, you numberless infinities
Of souls, and to your scatter'd bodies go,
All whom the flood did, and fire shall o'erthrow,
All whom war, dearth, age, agues, tyrannies,
Despair, law, chance hath slain, and you whose eyes
Shall behold God, and never taste death's woe.
But let them sleep, Lord, and me mourn a space,
For if above all these my sins abound,
'Tis late to ask abundance of Thy grace,
When we are there; here on this lowly ground
Teach me how to repent; for that's as good
As if thou'hadst seal'd my pardon with thy blood.

The mounting crescendo of the lines addressed to the angels, and the sudden, uncertain calm as the speaker addresses God.

A goddam kingly poet, rather unknown in his lifetime, who perhaps invented the avant-garde, in English? His mind has coral-like involutions (you can see it even in his TITLES: "Nature's Lay Idiot", "Upon Mr. Thomas Coryate's Crudities"). Why doesn't everyone read him now? He was the Frank Zappa of the early 17th century. (Somehow, you feel that you're reading him IN COLOR, when most poets are in black-and-white.)

I came into this book with only an exposure to (and love of) "No Man Is an Island" with the hopes of finding more of the same. Instead, I found a mixed bag where even the best poems did not live up to my expectations. In fact, most of these poems -despite often having an enjoyable and sometimes unexpected rhythm when read aloud- are self-indulgent, vain and whiny. The first section of "Songs and Sonnets" is almost entirely about sex, love, women, grief and his relationships; they feel like they were never intended to be more than personal, dramatic, emotional expressions (in fact, Hayward alludes to this in the introduction). Many of these were written in the lust of his youth and do not carry the metaphysical significance of some of his later poems. Even his famous "The Flea" feels rather simplistic and vapid when one is subjected to the tiring onslaught of his youthfully romantic poems. In "The Triple Foole" he, at least, acknowledges this.

"I am two fools, I know,
For loving, and for saying so,
In whining poetry;
But where's that wiseman, that would not be I,
...."

Divine Poems" is this little book's saving grace. These poems are much more tolerable -even enjoyable and meaningful at times. Donne was a different person with age and his writing reflects that fact. There are, however, times when it feels he simply switched the subject of his poems from women to God ("lust of flesh" to "lust of spirit"). Still, his writing improved with age. He developed a lot more depth and seemed to put a lot more intentionality and effort into his poems.

After digging and digging, one occasionally uncovers a dazzling line of brilliance in his writing. But it is never easy. All of Donne's work is just that: work. It is more rewarding the more time you spend reading and rereading it. If you are going to read it, read it twice.

I do not possess the adequate understanding of poetry's history to be able to appreciate Donne's influence on other, later poets. Perhaps this would help me to find respect and admiration for more of his work. Also, it is hard not to judge what feels extremely cheesy, clichéd or overdone when I don't understand the context from which he was writing and what may have been fresh or novel at the time. If I do come into a more extensive and detailed framework of poetry's past perhaps I will be able to come back to Donne's work with more serious dedication and arrive at a different conclusion. Until then, I'm somewhat ambivalent.

* It should be noted that I skipped Verse Letters, Anniversaries and a couple other sections of non-poetry. I did skim them a little but could not bring myself to fully commit. The antiquated language can act as a severe barrier at times. There is no easy read here. If you are truly serious about poetry and enjoy rigorous exercise then this book may be for you.

In his dullest points Donne still stuns with his graceful, slightly off-kilter verse; in his finest he is almost a patron poet for the Christian man [not the faith], simultaneously arousing grandiose images and appreciations of God and Christ, while expressing intense suffering in his fluctuating faith and fear of what the (perhaps more than normal) sin within him will result in upon his death. His metaphysical wit became legendary among his contemporaries, and its sly humour is elevated to the extreme in his early bawdy ballads.

Where his contemporaries are floral and occasionally stiflingly courtly, Donne's poetry is of mud and wood and hardship.

My earliest memory of Donne is "Death Be Not Proud" and 10th grade stanza and personification lessons in a Christian school that exemplified his simplest work. Donne wit and medievalism was always embraced by my Christian educators, who harkened fondly back to the stark moral contrasts of the morality-play/inquisition era. They raised Donne up next to Milton, Bunyan and other Johns of letters sanctioned by the Church-State, not to mention his healthy bit of luck being male, white and born into the upper class. Who knows what classics we'll never read, written by the supposed inferior populations of the past? But anyway, we have Donne. For me, his sonnets – even the frenetic ones – mostly conjure Renaissance-fair-esque courtly cheesiness - plucking psalteries and dulcimers and tinny recitations of sing-song nausea.

Aside from the misogynist vibe and the blatant Protestant vs Catholic scramble, Donne has interesting albeit crude ideas. One poem my schoolmarms never discussed in class is "The Flea." Taking a Sadean theme, Donne subtly conjures bestiality, the exchange of fluids, bloodletting, sacrificial rites, vampyric occult, etc. or maybe those are just the misperceptions of my guttered mind. At its most innocent, it evokes the crucifixion metaphor and marriage. In either case, it's a strange and fascinating piece of "metaphysical conceit" as they say.

I'd say his best works are his elegies. It's difficult to be critical of flowery verse when it's as final and honorific as an epitaph in stone. "The Second Anniversary" is the most beautiful elegy of any written in metered verse. Also "Elegie XVI - On His Mistress" is a lovely work, and a rare break from his sexist/chivalric theme. My favorite of all his work is "The Triple Fool." This is a modest but clever look at the mirroring effect of readership.

Overall, much of the verse is clever and capable of deeper interpretations than a first read can reveal. However apt and even ahead of his time Donne's work seems, it still fails in many ways to remain readable. The stilted meter, forced rhyme, the extreme bias and heavily censored content, all make me wary of spending more time with Donne than this work has given me.

In Grinnell College's freshman humanities course we were assigned a great deal of reading by a rather eccentric, old-school English professor, Maurice Lieberman. He had not adjusted to the sixties generation and likely never did, regarding us with considerable disdain and suspicion while he tried to teach his course the way he always had.

The class met thrice weekly, in the afternoons just after the Star Trek reruns were over on "The Floppy Show", with new reading assignments for each. One spring Wednesday or Friday we were expected to have finished the love poems of John Donne. As ever, pressed for time, I had read them all silently--not the way to handle poetry.

Opening the class, Lieberman asked what we thought of the sonnets. No one spoke. Avoiding his gaze, I recall the sun pouring through the windows of our Alumni Recitation Hall classroom building. It was truly a beautiful day. He asked again, more heatedly. Silence. God, I hoped he wouldn't call on me.

As it happened, he didn't call on anyone. Instead, he launched into a tirade. "I assigned Donne and these poems particularly because they are about the one subject you seem to care about: Sex!" he said, now shouting. I blushed as I always did when sex was mentioned in those virginal days. God, dear God, don't let him call on me, I prayed . . .

He didn't call on anyone. Instead, he dismissed the class.

And, yes, Donne does write, rather explicitly and very well, about sex.

It's John Donne- I think that says it all.

*2.5*at uni, i studied donne because of his metaphysical poems (with the conceits and everything) but here i thought his elegies were the best part of the selection.

i skipped a couple of pages. some of it was really great, some of it made me drowsy.