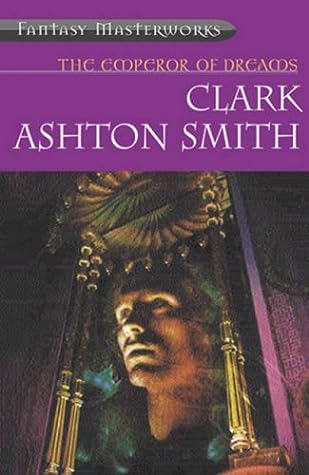 The Emperor of Dreams

Ah, Clark Ashton Smith. For those of you unfamiliar with this writer imagine someone with the fevered imagination of Lovecraft and the lyrical stylistic chops of Lord Dunsany and you'll get an idea of what you're in for. For my money Smith is perhaps the best of the "Weird Tales Triumvirate" of Lovecraft, Robert E. Howard and Ashton Smith. I would probably place Howard as a close second on that list...heresy I know, but for all of the coolness of Lovecraft's ideas he really was just a god-awful writer.
Take a dip into this tome and visit one of Smith's created worlds: medieval Averoigne, antediluvian Poseidonis, far future Zothique, or ancient Hyperborea, all tinged with the dark fantasy Cthulhoid elements borrowed from his friend Lovecraft and embellished with his delicious prose.
I'd heartily recommend the tales "The Double Shadow", "The Beast of Averoigne", "Mother of Toads", and the 'Malygris tales' "The Last Incantation" & "The Death of Malygris" as good starting points, though there are few places to go wrong here.

Upon what rare and oriental wine
Your visions fed, I cannot claim to know,
Nor from what volumned lore of spheres sublime
You built your necromantic tales whereto
So many dreamers like myself have come
To revel in the opulence of art
That nourishes like some supernal sun
The famished dreamers whom our age doth hurt.

It is apparent you alone may spell
The hieroglyphs of parchments old as Mu
And vivify old legends to regale
This modern age that mocks its poets so.
Sing on, Atlantean, and cull new song
From ancient rimes neglected overlong.

This stuff was truly a revelation to me when I discovered it about ten years ago. Clark Ashton smith is simply a gorgeous writer, who creates tales with a mastery of language and lyrical sense that makes them flow like exquisite poetry, and indeed, he was also a poet of a startlingly high order. Now, it is true that Smith's fiction was created with the clear aim of making him a bit of cash, and that he often used the same themes and sometimes pretty much re-told the same stories using slightly different words and characters. however, this wasn't an abnormal practice for pulp writers and Smith's words are like music, even at the worst of times. Just take the stories in a little at a time, never reading too quickly and spreading out the tales as much as possible, and if you love decadent, macabre settings and fantastic descriptions of bizarre landscapes, twisted hybrid creatures, lonely souls, and painful love, you will adore this stuff.

Smith's stories are often very doomy and can pack a pretty heavy sting in the tail, even if sometimes you can predict what's coming, as in the heavy and black-as-the-blackest-night "Isle of the Torturers". "The Dweller in the Gulf" is one of the creepiest stories I've ever read in my life and will give you chills all over. Then there's stuff like "The Seven Geases", which takes you on a tour of a fascinating and ever vaster and increasingly bizarre series of underworld landscapes only to suddenly drop you off a precipice at the end with a nasty "hah hah!" On the other hand, unlike some of his contemporaries (Lovecraft!), Smith has got a sense of humour, and isn't afraid to show it at times, or can even surprise you with a rather positive and benign ending from time to time. Reading his tales, one gets the sense that he was a lot more worldly than some of the other writers operating in his field, and that the reason he wrote about decadence so well is that he actually had quite a bit of a love of wine, women and song himself. I feel that there is definitely a touch of the romantic in him, too...and he did translate Baudelaire, after all.

The best stories here are, I think, ones where Smith goes for an atmosphere of the far away and, as the man himself would say, "the ultramundane". A few of the stories are set in contemporary times and are about contemporary people, more or less, and while some of them are enjoyable, a number just seem to be aping Lovecraft and end up being rather forgetable. The science fiction-themed stories are great for me; very pulpy but full of Smith's love of utterly fantastic landscapes and complete alienness. The stories about lost, forgotten civilisations and those set at the end of humankind, where magic and wizardry and necromancy hold sway and the world is a strange, decaying place, are probably going to be Smith's eternal legacy and, indeed, make up a large part of his strongest body of work. But, the adventures set in medieval France are charming and often rather romantic, and a few of the later stories (he didn't write many after the thirties) hint that he could have taken things in some really interesting new directions if he'd decided to keep at fiction. I'm particularly fond of the short, punchy lampooning of religion that is "The Schizoid Creator".

"The Emperor of Dreams" is a large collection of 46 fantasy stories with exotic and atmospheric settings. The author's use of obscure and esoteric language encourage the reader to keep a dictionary handy.
Contents:
ON FANTASY
SONG OF THE NECROMANCER
THE ABOMINATIONS OF YONDO
THE NINTH SKELETON
THE LAST INCANTATION
A RENDEZVOUS IN AVEROIGNE
THE RETURN OF THE SORCERER
THE TALE OF SATAMPRA ZEIROS
THE DOOR TO SATURN
THE GORGON
THE WEIRD OF AVOOSL WUTHOQQUAN
THE NAMELESS OFFSPRING
THE EMPIRE OF THE NECROMANCERS
THE HUNTERS FROM BEYOND
THE ISLE OF THE TORTURERS
THE BEAST OF AVEROIGNE
GENIUS LOCI
UBBO-SATHLA
THE KISS OF ZORAIDA
THE SEED FROM THE SEPULCHER
THE WEAVER IN THE VAULT
THE GHOUL
THE CHARNEL GOD
THE DEATH OF MALYGRIS
THE TOMB-SPAWN
THE SEVEN GEASES
XEETHRA
THE DARK EIDOLON
THE FLOWER-WOMEN
THE TREADER OF THE DUST
THE BLACK ABBOTT OF PUTHUUM
NECROMANCY IN NAAT
THE DEATH OF ILALOTHA
THE GARDEN OF ADOMPHA
MOTHER OF TOADS
THE DOUBLE SHADOW
THE COMING OF THE WHITE WORM
THE ROOT OF AMPOI
MORTHYLLA
AN OFFERING TO THE MOON
THE THEFT OF THE THIRTY-NINE GIRDLES
SYMPOSIUM OF THE GORGON
TOLD IN THE DESERT
PRINCE ALCOUZ AND THE MAGICIAN
A GOOD EMBALMER
THE MORTUARY

A gigantic collection of stories that spans (I assume) almost the author's entire career. The first stories seemed like flagrant thesaurus abuse, but soon enough the prose became masterfully florid, ancient, and poetic. It's difficult not to compare the author to his contemporaries H.P. Lovecraft and Robert E. Howard, as all three shared ideas and universes among their work. At first I thought Clark Ashton Smith to be a somewhat generic version of the other two, with no real defining philosophy to his perspective. But where Lovecraft explores man's insignificance next to the cosmos and Howard explores man's animalistic and evolutionarily incidental station, Smith seems to focus on the "ennui" of existence. He does it through wizards, gods, kings, and especially necromancers, who are not content with the mundanity and predictability of earthly life. It's a fascinating lens through which to explore the universe, and by the end of the collection I was sorry to leave it.
It's so interesting to have these three great authors playing off of each other's work and ideas, and in a sense they all seem to complement each other and present separate, yet equally valid, perceptions of human existence.

Truly yours is a melancholy case.' There was concern in Famurza's voice. 'I have been reading some of your late verses. You write only of tombs and yew-trees, of maggots and phantoms and disembodied loves. Such stuff gives me the colic. I need at least a half-gallon of honest vine-juice after each poem.'

Clark Ashton Smith was a short story writer, poet and illustrator. A friend of H.P. Lovecraft, some of his stories belong to the Cthulu Mythos.

Although the quotation above is from one of his stories, it could well apply to Smith himself. His stories contain necromancers, demons, otherworldly gods, liches, ghouls, tombs and doom . . . lots and lots of doom (mostly of the eldritch kind). I read over half of the stories in this book a few months ago, and then stopped because all that doom was getting a bit much. I read the rest a story at a time, and have just finished. They are good stories but 550 pages all at once is too much, and spreading them out was a great improvement. I couldn't believe it when I was almost at the end and came upon a couple of humorous stories!

Kinda sad to spoil the current 666 review count but had to say, I'm a fan. For all the admirers of the weird and fantasy, this is the best you could ask for. This voluminous collection contains some stories on which he was clearly just practicing his hand, but even those were fun.

Great collection of material from one of the Weird Tales Triumvirate (along with Howard and Lovecraft). Much of contemporary writing looks upon adjectives with abject horror. After Hemmingway and Pound won the style war, adjectives became pariah (much to the chagrin of those of us who love Faulkner). Language! Not just the stories, but the language of Clark's stories thrills. Imagine trying to explain the horrors of the abyss without references to movies, comics, pop-culture and pulp fiction (or the lingering mental clipart left in our imagination by media). Contemporary writers can easily tap into our collective memories to pull out those images that require little teasing. Not so easy a hundred years ago! I think of Clark when hearing Tolkien's sage counsel "We should look at green again."

Great stuff. . .as long as you like stories about necromancers, gods from strange planets and dimensions, ancient pre-human civilisations, sorcery etc. which is all good as far as I am concerned!
My favourite ones from this collection being: The Door to Saturn, The Seed from the Sepulchre, The Double Shadow, The Coming of the White Worm and Symposium of the Gorgon.
I'm sure if went through it again I would have other favourites though.
I am going to say that though I am a huge Lovecraft fan. . .I think I prefer Clark Ashton Smith's writing style.
An under-rated writer if ever there was one.