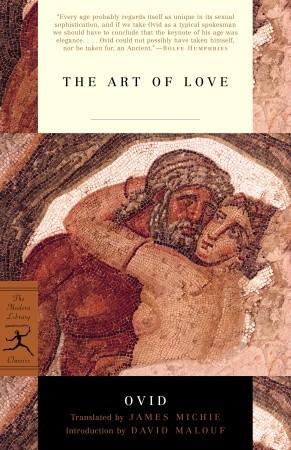 The Art of Love

I was visiting a city for the day with a friend of mine; it was cold outside and we’d taken refuge in this really quaint bookstore. It wasn’t one of the chain ones, but a really quirky independent bookstore that had shelves packed with tomes and all sorts of literary marvels.

I spent a large amount of money in there Ovid. I bought things at random without really paying attention to what they were: I just wanted them all, you know how it is. I saw this nice big slip cased edition of your poetry so, naturally, I thought I’d have that. When I took it to the cash register the woman behind the till was smirking at me. I had no idea why at the time. I thought she was laughing at the amount of books I bought not the book I bought.

This is where it gets really awkward Ovid. During the train journey back home my friend asked me what books I bought. So I innocently showed her. I got all my books out of my bag and we sat there looking at them. She opened my new explicitly illustrated copy of The Art of Love that showcased instructional images and poetry about the pleasures of oral sex. Our friendship has never been quite the same since. You could have warned me Ovid. I honestly thought we were pals.

I can’t put pictures in this letter, but you know the type they are: they are essentially pornography albeit that of a colourful and artistic variety. Just the sort of thing you like. They’re not the type you show your friends on a public train (if at all).

All the best from your extremely embarrassed former friend,
Sean

Short, sparkling, witty and sexy, this is a tongue-in-cheek comedy of the sexes dressed up as a how-to guide. It's best enjoyed on a hot afternoon, lounging somewhere comfortable with a fizzy cocktail in your other hand. Ovid is great company – a man of the world, funny and quotable and just the right side of disreputable. He takes the would-be lover through the whole process of finding, winning, and keeping a partner, covering such crucial areas as the perfect level of drunkenness, the trustworthiness of servants, and the need to be cautious if you hook up with someone on a boozy night out:

On these occasions don't trust the lamps – they can lie:
Darkness and drink blur the judging eye.

This is James Michie's 1993 translation, whose jaunty rhyming couplets make every couple of lines seem like something you want to put on a business card.

The last book is aimed at female readers trying to pin down their man – he's nothing if not even-handed in his approach. It's strange to reflect that for the best part of two millennia, Western Europe essentially pretended female sexuality didn't exist, and yet if you go back a bit further you can find Ovid cheerfully stressing the crucial importance that both partners manage to get themselves off satisfactorily.

which Mozley in 1929 rendered cautiously as

Let the woman feel love's act, unstrung to the very depths of her frame, and let that act delight both alike.

...but which in Michie's translation is more robust:

A fucked woman should melt to her core, and the pleasure
Be felt by both in equal measure.

It sums up Ovid's basic theme here: pleasure for all. Not least for the reader, because this is great fun.

I'm a great collector of Folio Society books. The choices in books are excellent and the quality of the books themselves is unsurpassed. They are normally bound in full cloth and I'm always so impressed with the vibrant colours of the illustrations as can be seen in this particular book.

I came across this book purely by chance yesterday as I was dusting and noted that I purchased it in 1994. I vividly recall how impressed I was at the time both with the poetry and the illustrations.

Still, it's a super book to have and the introduction in itself gives a good account of Ovid's life.

I was drawn in by the title and I feel cheated, so let me give you some title suggestions that will give you a truer idea of what this book is about:

1 - The Cheater's Guide To Cheat Some More

2 - A Thousand Ways To Deceive

3 - How To Make Fools Out Of Women

4 - The Liar's Step By Step Manual

I know one needs to have in consideration the time period in which the book was written when reading it, but The Art Of Love is just one gigantic mess.

Ovid thinks he's some great expert of love, when in truth, he's only talking about lust and teaching men how to be big fat liars, cheaters and huge bastards altogether.

I don't know how women could possibly fall for all that fake crap, but the Lord knows it happens. 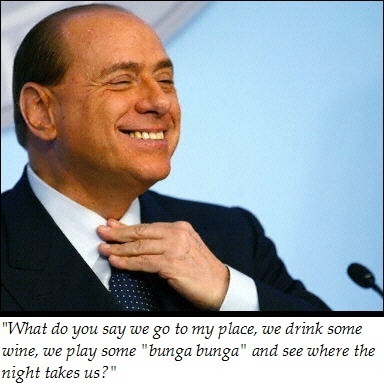 Do I need to say anything more??

Now, only if I could figure out a way to play the James Brown track.

As much as I loved and plan to reread Les Metamorphoses, I can't say the same about this one.

Even if I make abstraction of the disturbing and unfair sexism in Ovid's stupid lessons on love, and give him a "written 2000 years ago" pass, the book is still cheap.

I don't think he put too much effort into it at all. It was as though he drank a few glasses of wine, played with himself a little and then grabbed a plume and ink or whatever and made himself laugh with these lessons.

Uh, Ovid, LOVE isn't about getting to third base, lifting someone's skirt at the circus, stalking, preying, lying, scheming, manipulating, baiting or worse, asking your lover to turn on his or her stomach because you can't stand their face.

Ah man. I promised myself I wouldn't go on a rant.

Okay, so... calmy I say, the book has its a value as a glimpse of Roman Culture in the Golden Age and had some interesting bits on Greek mythology, but then again he nearly copy pasted those out of his Metamorphoses... Again, too easy breezy.

That brings me to his Cover Girl act. Recipes for face masks and make up?

Basically mind your own business. And I don't think Ovid's business was love. It was seducing and sex.

Which can be love on some level but I was looking for a book on The Great Love. Those feelings and acts that aim at the chiefest truth and that bring us bliss.

In the end, Ovid keeps talking about how good of a lover he is...

If you don't know the art of love, read on:
after this poem, you should be a don.
Ovid is so cool. I have the copy translated by Tom Payne (published 2011). You can also read the version translated by Julian Lewis May (1930) here. May translation sounds oldish but still is easy to understand; Payne translation (all quotes in this review come from Payne translation) consists of pairs of lines that rhyme, so it has musical quality.

This is love before Christianity severed love and sex, a sad cultural tradition that we still carry on today whether you are a Christian or not. Because of the dichotomy, a relationship is either serious or only about sex, a woman is either a madonna or whore, in our culture.

Ovid has no such nonsense. He openly discusses how to win women (Book 1) and how to keep her (Book 2). His instructions are so honest and insightful of human nature to the point of hilarity. And he doesn't boast on his pick-up technique--Ovid actually scorns men who bed women for their pleasure alone. Ovid likes sharing:

I hate sex when it brings uneven joys:
that's why I don't like doing it with boys,
or girls who give out, thinking it a bind;
they're dry, and spinning wool is on their mind: (l. 683-686)

(You are not surprised about homosexuality in ancient Rome, are you?)

Ovid understands extramarital relationships as well. Unfortunately, Emperor Augustus didn't like it. Patriarchy is another factor that restricts our sexuality; the Emperor forced a law to punish women who commit adultery, and the free-spirited Ovid was exiled. (I read somewhere that this law became meaningless soon, however. Roman ladies who faced this legal issue declared themselves to be prostitutes, a class that is exempt of the law, to evade punishment. They didn't really practice the service--just claiming the status was sufficient for evasion.)

Payne translation contains:
* The Art of Love (Book 1-3)
* The Cure for Love
* Treatments for the Feminine Face

A few examples of the things you learn:
* How to court women on a budget
* How to socialize with your mistress's boyfriend (Payne translation)/husband (May translation)
* How to best deal with your girlfriend/wife's infidelity
* and more (Book 3 is for women!)

I read this for class recently, and I have to say I'm somewhat impressed and somewhat confused. What I can't work out is the relationship between (what I found to be) the overtly satirical tone and the carefully crafted series of analogies imparting what seems like literal advice. Either Ovid was poking fun at what he considered an absurd game men and women play to socially justify their sex lives, or he was concerned about something darker and intended to approach it with a bit of levity.

I can appreciate how easy it might be to consider much of this as disgustingly misogynistic, but reading it mindful of the precedents of Greek literature, and the powerful hindsight afforded by medieval works of similar substance, I think The Art of Love represents a clear step forward on a social continuum. Women in Ovid's mind are no longer merely spoils of war taken from hated enemies (though I suspect they certainly haven't ceased to be this either), but they become formidable enemies themselves in the warfare of love and courtship. I grant it's not the most salient aspect of the work, but I believe this is a case where some historical examination makes room for a more charitable reading than first glance would suggest.

Ultimately I'm unable to find any clear difference among the various guides to courtship I've encountered, whether Ovid or Cappellanus or Cosmopolitan magazine. They're all partial and affected and sexist in their own ways. One might cynically conclude that Ovid, like so many others, is merely describing a game whose rules are blithely arbitrary, and that in our own times and own ways we all just play along.